To supplement Independence Day celebrations, the Daily Times will highlight, all of August, the individuals who continue to make Pakistan proud. Our 16th interview is with the record making female squash player Maria Toorpakai Wazir 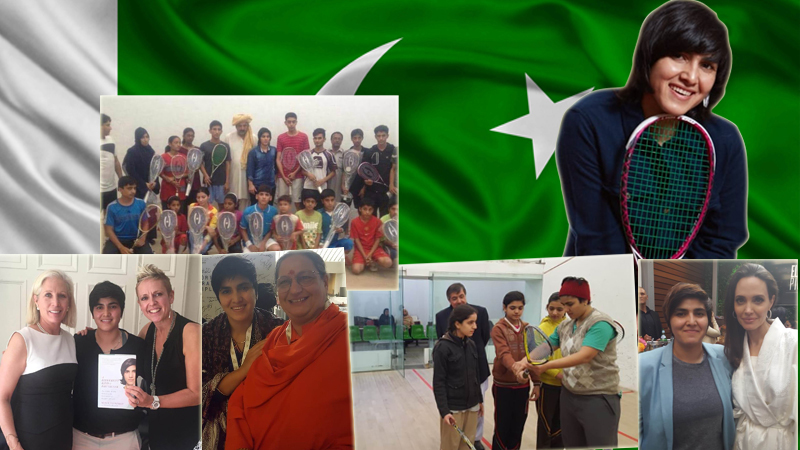 Tell us about your foray into the field of squash. How did it all begin for you?

I accidentally became a squash player. I had always been very aggressive, sporty and strong ever since childhood. My body’s potential was always that of a boy’s. I used to hang out with my brother a lot and a lot of older boys from our neighbourhood. I observed that the only difference between a man and a woman is that of hair and clothing. So, I ditched my clothes and began dressing up like a boy. I took up the name of Genghis Khan and began playing sports with that name. When we shifted to Peshawar, I remember getting into a fight with a boy where I broke my head and really hurt myself. My father saw me in that state and really worried for me. My father had always been like my friend, he wasn’t like a typical dad. He raised his daughters very differently. My elder sister Ayesha was a great debater and my dad encouraged her to pursue debate competitions and be the best at it. He used to train her. My mother used to write all her speeches. Everyone called Ayesha Junior Benazir Bhutto, as her oratory skills were so good. She won all competitions and became the Best Debater of Pakistan. But I wasn’t like that. I used to see a book and start yawning. So my father identified both of our skills and encouraged us to do what we wanted. He got me admitted at the Peshawar Sports Complex so I could channel my energy. My parents worried for my safety and so in front of the world, I was a boy and played in the capacity of a boy as well. I secured second position in the All Boys Weightlifting Championship. However, with weightlifting, I got bored after a while. That is when I got into squash because I think squash is a better way to exert all your energy. I admired the pretty dresses and the beautiful rackets and decided to join squash.

What sports other than weightlifting and squash are you really good at?

I am really good at tennis as well. When one is an athlete, the desire to play other sports remains with you and I play tennis for fun, from time to time.

Based in Khyber Pakhtunkhwa, how challenging is it for a girl to make her mark in sports? How did you overcome these challenges?

I have seen the worst of challenges. I had the desire, the will, the ambition, the drive and most importantly the support to follow my dreams. Girls in Balochistan or anywhere else in KP don’t have that. They have to suppress their dreams. I always say that women are second class citizens in urban cities. But in tribal areas, they are third or sometimes fourth class citizens. This is wrong. Women are human beings too and everyone should be treated equally. In Pakistan, men want to be in power only. It’s not a religious order, it’s a cultural act. I don’t agree with these women suppressing laws and culture. Yes, I wear a skirt to play squash and I don’t care what anybody thinks. I do it for myself. I have been bullied and harassed by boys making me feel dishonourable, but in reality, it is these men who are dishonourable. If honour killing began against men, more than half of their gender will be wiped out.

You are the first tribal Pakistani girl to play international squash tournaments. Weren’t you ever scared of being approached by the Taliban or terrorists?

In 2007, Taliban began threatening me, discouraging me to play squash. In those days, a lot of bombings were happening in KP. I was very young and focused on my game. The people were very used to these bombings which were going on at that time. So I got really nervous on receiving those threats. More than myself, I was worried for my father. He was one of those people who wanted to see a change in the province and his approach towards life was also very different. He was a very hardworking man. I thought to myself that if something happened to me, my father will be shattered. So I stopped playing and confined myself to my home, playing indoors and not going anywhere. One morning, out of nowhere, the president of the Pakistan Squash Federation called me up. He was also the Air Chief Marshal. He inquired about me not playing and I told him the reason. I remember, he got really upset and then hung up. The next day, the matter was discussed in the Parliament. I was offered under-cover security. But I was still hesitant to accept as I did not want anyone around me getting hurt because of me.

You are the proud recipient of the Salam Pakistan Award. What, according to you, has been your biggest achievement so far?

I am very happy and content playing squash. I know I have the potential to be #1 in the world. I have had the opportunity to play against the top 10 in the world as well. I am aware that my presence dominates my peers and immediately puts them under pressure. I am so proud to represent Pakistan abroad. The Asian Games and the South Asian Games have been the most enlightening experiences. I received the President’s Award which was handed over to Hashim Khan about 47 years ago. My book recently launched called A Different Kind Of a Daughter. A documentary on me released which was called ‘The War to be her’. It played at the Toronto Film Festival and the all major film festivals of the United States, Europe and London. Anybody who reads the book will fall in love with Pakistan. I feel like my purpose in life to spread awareness. I have a charity called the Maria Toorpakai Wazir Foundation which is US based. Under the MTW Foundation, I have built a hospital for women and children in Bannu. I want to build peace between Israel and Palestine through extracurricular activities that involve sports. I want to do something for the Syrian refugees. I have been requesting Chief of Army Staff General Qamar Javed Bajwa to allot me a piece of land. It is plan to build a Sports Science University to give opportunities to people who want to play sports but do not have the opportunity to do so. I have all the resources, plan, manpower and technical facilities to work on the university. All I need is a piece of land. I want to see the Pakistani flag flying high at Olympics. There is so much discrimination in Pakistan. Women playing sports are not given respect here and I have seen that happening. The university I have in mind will be for elite athletes and it will be a state-of-the-art university that would build future Olympians.

You are the winner of the World Junior Women’s Squash Championship. Tell us about a memorable time during your career.

I have played very tough matches in my life so far. I was 16 when I played in Egypt. I was on a winning streak. I was defeating one player after the other. On this performance of mine, I was nominated for the Rising Squash Player award by the international squash federation. So one day I was in my bedroom, playing with a ball and I realised I would be 19 in sometime and wouldn’t be able to participate in the Junior Squash Games anymore so I decided to participate at that very time. I performed really well and all of sudden this person came to me telling me I had to take a dope test. Only the players who qualify for the semi finals need to take a dope test, for which I was ecstatic. I was playing against an Indian girl who refused to proceed with the match. India announced that they are willing to draw the match and give both of us the bronze medal because I was so good at the game, she didn’t want to play. During the Hong Kong Asian Championship, I played the longest match defeating both boys and girls. Ultimately, an Indian girl won the match but I remember she came up to me telling me what amazing a competition I had put up.

I have been raised being very patriotic. I love Pakistan. In recent times, it was difficult for me to play and represent Pakistan because of what was happening. The reaction from Pakistanis regarding the entire matter which involved my sister really hurt me. Pakistanis should learn to accept reality and not turn a blind eye towards it. We have a lot of talent. We should support children in their positive endeavours. Ignorance prevails in our society. We need to get off social media and read books instead. Instead of listening to Mullahs, we need to read the holy Quran ourselves.

You are ranked #56 among world female squash players. What motivates you to excel no matter what?

My country is what motivates me. I have always imagined myself winning at a podium since young. I have played whole heartedly. I lost my faith in playing when I saw so many tough athletes without any principles. I spent time with my family and regained my faith. To play sports, education does play a role and so does faith. I have vowed never to bow down before the powerful.

DEDICATED TO THE GAME

Maria Toorpakai Wazir is the first Pakistani girl in international squash tournaments, turning professional in 2006. As of 2012, she was ranked as Pakistan’s top female squash player. In 2013, she was one of three Pakistani women in the top 200.

In 2009, Maria Toorpakai Wazir won third place in the World Junior Women’s Squash Championship. In 2011, she arrived in Toronto, Ontario, Canada to train with former professional squash player Jonathon Power. As of 2016, she is ranked 56th among female players in the world.

In 2007, the President of Pakistan bestowed the Salaam Pakistan Award upon Maria. She was nominated as Young Player of the Year 2007. In 2009, she won third place in the World Junior Women’s Squash Championship. In 2012, she won the first annual Voice of Hope Award from Canadian First Lady Laureen Harper.

Under her charity called the Maria Toorpakai Wazir Foundation which is US based, Maria has built a hospital for women and children in Bannu. She wants to build peace between Israel and Palestine through extracurricular activities that involve sports. She wants to do something for the Syrian refugees. She aims to build a Sports Science University to help aspiring athletes avail opportunities and get ahead. Maria is an advocate for women’s rights in Pakistan to “overcome discrimination and cultural obstacles”. She has set up a foundation encouraging families to educate girls and allow them to play sports.

In 2016, Maria published her memoir, for which she was interviewed by Terry Gross on National Public Radio’s Fresh Air. Her recently released book titled A Different Kind of Daughter – The Girl Who Hid from the Taliban in Plain Sight is out in stores.