'The highest recorded temperature of the city is marked 47 degree Celsius. A lot of factors, when added up together, upshots the present climate of Lahore' 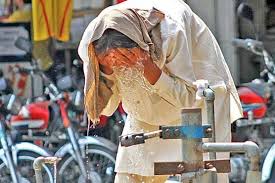 People witness the hot days of summer seven months in Pakistan, starting from the last days of March ending in the mid of October. The country is situated just above the equator making it one of the the warm countries of the world which is blessed with four seasons. Moreover, the warm and damp breezes carried by Arabian Ocean roll up throughout the country and most days of the year observe hot and humid atmosphere. The highest recorded temperature of the city is marked 47 degree Celsius. A lot of factors, when added up together, upshots the present climate of Lahore.

From past few years, the amount of smog in Lahore has increased tremendously, which often goes un-noticed because people have become habitual of smoke mixed in the air. Smog is chemically a factor leading towards rise of mercury.

Load shedding of electricity in the resident areas and increased prices of petroleum add insult to the injury, destabilizing people to use air conditioners, fans, air coolers, refrigerators etc. to shake off heat waves. Public is unable to sleep at night for unscheduled and uninformed curtailment of electricity in the midnight as it is impossible to take rest without the supply of cool air. Although the previous government has fulfilled its promise of overcoming load shedding of electricity to a great extent, but still it has not satisfied the electricity demands of the citizens completely.

Another reason of blazing summer in Lahore is increased transportation. The roads are always busy with rikshaws, cars, buses and bicycles. The engine heat warms the surroundings by burning its fuel and by the dint of its heavy noise pollution. The increased number of vehicles on the lanes result in overall heating of the town. Being a metropolitan city, Lahore in overloaded with road traffic jams, as compared to the other cities of the country with less burden of heavy traffic, smoke emitted by them leads towards the rising of temperature.

Poor planning and elevated urbanization is also adding up to the horrible picture of the city. Lack of interest in housing schemes makes the dwelling un resist-able to heat, so the walls of the houses catch more rays when their faces are exposed erectly in front of the sun. The city is in a dire need of expert architectural designs which can shape the colonies in such a way that repels sunshine.

It a well-established fact that trees are environmental friendly and they help in reducing the temperature. They absorb human emitted carbon dioxide and release fresh oxygen in the air for breathing. The city has insufficient plantation to make the environment livable. Most of the pavements are bare and empty. Greenery not only can portrait the city gorgeous but also reduce the hotness. Northern areas of Pakistan are an example of Lahore. Another contrast can also be made by comparing canal road, which passes from the middle of the city, with the other areas of Lahore. Canal is embarked with lots of trees hence making it a comparatively cool area. One can easily feel the difference as soon as by stepping onto the Canal Road.

Pakistanis are sentimental with full of anxiety, aggression and intolerance. They can be easily aroused on petty issues ranging from non-injurious accidents to losses in entrepreneurship. It is medically proven that when a person is angry, he results in sweating and heating up of skull. People encounter these intervals many a times in the day, ultimately making the summer more difficult.

Hot summer, furthermore, put many effects. People cannot visit recreational places during day time. Voltage demand increases day by day. Young generation cannot endure heat waves. It has become difficult to travel without air conditioned vehicles. Skin color of people ruptures easily when they are exposed to the sun. Temperament of people has become frantic. All in all the summer in Lahore is heading to an unbearable level.