Dear government, stop shrugging off your responsibility of educating children 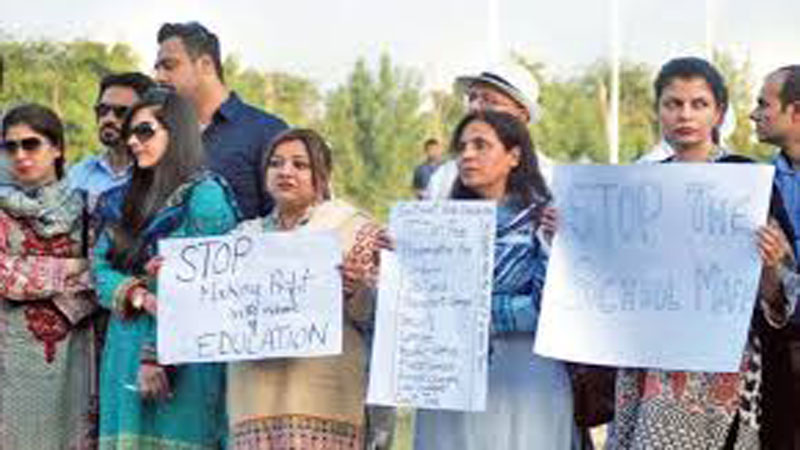 It started a few years back with parents’exasperation over‘exorbitant’tuition fees. Some took to the streets, to express their anger – while others went to the courts.

A case settled in one province reared up its head in another; and from Sindh to Punjab to Khyber Pakhtunkhwa (KP), the issue lingered, only to worsen with time.

Now, the case against private schools seems to have become a nationwide movement. It appears that some parents wish to send their children to high standard schools without paying a hefty amount. Their wish might come true after all. But their wishful thinking still comes with a heavy price.

These parents wanted a limit to be placed on the amount private schools can charge. While the high court in Sindh ruled that no restriction can be made on the fee charged by private schools, Punjab agreed on a limit. KP agreed too, but later decided that the limit should be lower, with no charges during the summer vacation.

Private schools’ owner created a ruckus. The optics displayed by the parents, however, by bringing in children on display at their protests gave them an emotional edge that is now turning out to be very detrimental for the entire education sector.

Meanwhile, the children kept going to the same schools. Their guardians did not or probably could not find a better or cheaper alternative. These parents probably want quality education for free. And while tensions were at their peak, the case came to the attention of the apex court; and now there are hints of state nationalising private schools whose fees are the steepest.

By joining the seemingly winning side, the state, instead of reflecting on the staggering implications of its failure, has cleverly deflected parental wrath onto the private schools.

The fact is that, today, private schools educate more than 50 percent of school-going children in Pakistan, and in Punjab the number is 60 percent. This policy is a reflection of the state’s inability to fulfill its responsibility. The bitter truth is that even today, more than half of the 200 million school going age children in Pakistan are not receiving any form of education.

It is this state, that in the year 2015-16 provided little more than 150,000 primary, middle and high public sector schools across the country, out of which more than 6,000 schools were non functional and more than a 1,000 closed. A United Nations Development Programme (UNDP) report portrays a worrying picture by concluding that “public school (in Pakistan) planning has failed to adjust to the needs of new and evolving demographics of both rural and urban areas in the more densely populated provinces. The last schools developed in urban centers are 40–60 years old.”

And it is this very state that through a series of legal interventions, is contemplating to take over the operations of private schools. It makes one wonder if successive federal and provincial governments have failed at delivering quality education at public schools, what value can they conceivably add by micro-managing private schools?

If, during the seven decades of independence, Pakistan has managed to allocate a mere 2.5 percent of its GDP towards education (which include infrastructure, teachers’s salary and supplies (books, pens, etc)), how does the state plan to employ more than a million teachers currently working in private schools and provide additional resources for an estimated 25 million children attending private schools.

The fear of nationalisation is now becoming a possibility, if hopefully not a reality. There are millions of children currently studying in private schools, while the total number of parents, representative bodies are less than a 1,000 . Flaring up this issue could lead to worst consequences.

So successful has the campaign against private schools become, that people appear to have forgotten sending children to private schools should be viewed as an option, not a necessity. Resultantly, most people have forgotten to question the one answerable for depriving them of their legal and constitutional right to education – the government.

The people have also forgotten the disastrous results of nationalisation of educational institutions during the 70s, which experts believe to be the reason for the decadence of the sector and the fast growth of the private schools.

It is our very next generation and those to come, that we have to protect and nurture in a learning environment. A battle over an administrative and financial issue can be overcome with not much losses sustained by either side, but the impact of a decision which causes ripple effects in the society cannot be reversed. Parents are now faced with a choice between either confronting false aspirations for vested interest or risking the future of their children being decimated by such people. The time has already run out.