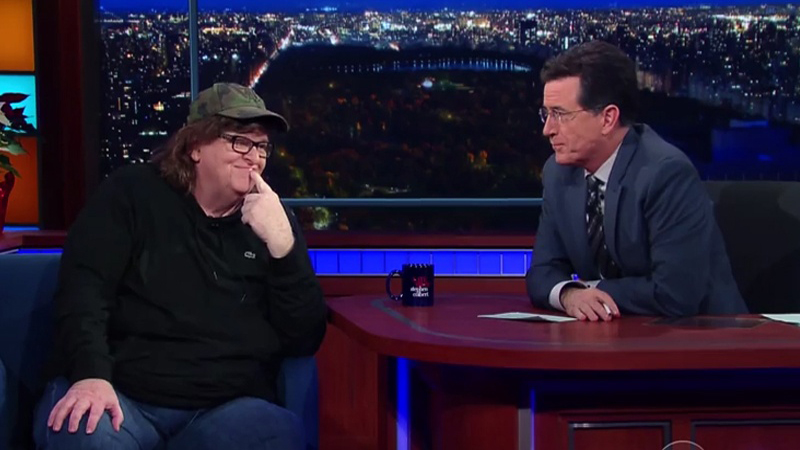 American filmmaker and activist Micheal Moore, while making an appearance on ‘The Late Show with Stephen Colbert’, said that America at its core was a liberal country. More people voted for the democratic nominee in the last seven elections than the republican, he said. (Hillary Clinton had also won the popular vote, but lost the Electoral College to Trump.)

The renowned filmaker, best known for his controversional documentary ‘Farenheit 9/11,’ which criticised the Bush asmistration push to the Iraq War, is all set to take on US president Donald Trump. Moore while talking to the late night comic Colbert, said that Americans deserved Trump, but he was hopeful for the future.

The filmmaker said that majority of the Americans are liberals and have therefore opposed Trump’s stance on issues like healthcare, abortion rights, tuition free colleges and environment.

On Trump’s policy of separating children from parents who illegally cross the US-Mexico border, Moore said, “I cry every time I watch the news nowadays. This not who we are as a country”

Moore, who also took on the Wall Street with his documentary ‘Capatalism: A Love Story,’ was one of the few people that foresaw the Trump win. In 2016, talking to Bill Maher on his show ‘Real Time with Bill Maher’, Moore had told the controversitional comic that he was seeing the defranchisement of the voters in Michigan, Wisconsin and Pennsylvania (also known as the rust belt, and the states that helped Trump to get elected.)

Moore, a Michigan native, released a documentary ‘Micheal Moore in Trump Land,’ during the 2016 election, in which he criticised the then republican nominee for twisting the despair felt by the white working class and manipulating it to his own advantage.

Moore, a socialist has sometimes also been under fire from the left for his “far left” beliefs. The filmmaker believes that US’s original sin is Capitalism. Moore was a Bernie Sanders supporter, but when Hillary Clinton won the democratic nomination, he switched his allegiance.

On a more serious note, the filmmaker said that the US was in deep deep trouble and “we have to do something.”

Talking about his upcoming documentary about Trump, Moore said that he had titled it ‘11/9,’ the night he got elected.

“It is about how we got here, and are we are gonna get out of it.” Moore said that he won’t reveal too much as the project was in final edit. When pressed by Colbert, he replied, “how about this, i promise you it has got stuff that you have not seen yet.”

On Trump’s policy of separating children from parents who illegaly cross the US-Mexico border, Moore said, “I cry every time I watch the news nowadays. This not who we are as a country.” “Who’s children are they…I consider them as my children,” he said to tumultuous applause.

Moore also screened a clip from the upcoming documentary ‘11/9’, it showed him trying to visit Trump at Mar-a-lago, his luxurious club in Florida and jokingly referred by members of the press as “the winter White House.” Moore said that he believed people will rise up against President Trump’s policies and jokingly referred to him as the ‘devil’.