Transitioning from the third world to first world 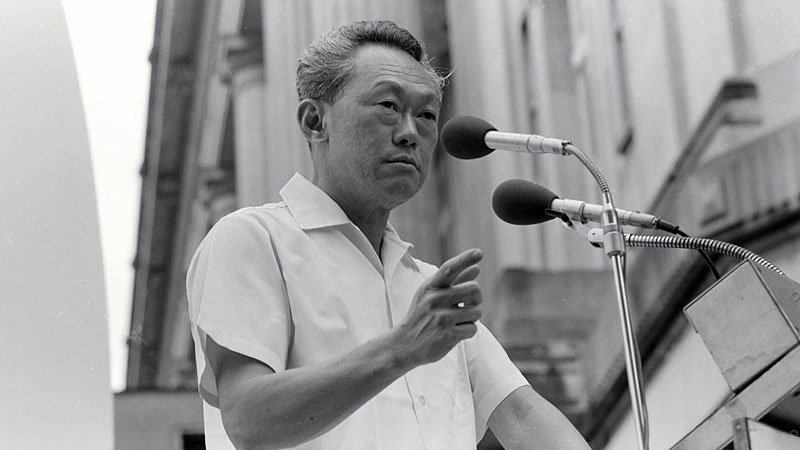 I did not know I was to spend the rest of my life getting Singapore not just to work but to prosper and flourish.” ? Lee Kuan Yew

A good leader understands that leadership is responsibility, not power. They take responsibility for their actions which includes both failures and successes. Being responsible requires accountability and adaptability. When leaders are accountable for things within their power and control, they are being responsible like Lee Kuan Yew.

Lee Kuan Yew, a man with a character, a man with a vision, a man with a mission, the founding father of a modern Singapore, was born on 16th September 1923. He studied at the prestigious Raffles Institution, graduated with Law degree from Fitzwilliam College, affiliated to the University of Cambridge.

Pakistani leaders should learn from Lee Kuan Yew’s social, political and economic reforms. Due to his dedication, commitment, honesty loyalty and hard work, Lee has made Singapore not only an Asian tiger but a great economic hub for the whole region

Lee Kuan Yew was the first prime minister and the founding father of modern Singapore. On 9th August, 1965 the Republic of Singapore was born. Singapore was accepted in United Nations in 1965 and two years later, it joined ASEAN.

Lee established corrupt practices investigation bureau which was strengthened through successive legislations and was given the power to make arrests, investigate bank accounts and income tax related information of suspected individulas.

Due to industralisation, highly skilled labour, modern transportation, communication network, homelessness and unemployement has stamped out of Singapore.

Now it’s time for our Pakistani leaders to learn from Lee Kuan Yew’s social, political and economic reforms, due to his dedication, commitment, honesty loyalty and hard work with which Lee has made singapore not only an Asian tiger but a great economic hub for the whole region.

Lee Kuan Yew took action against the corrupt practices in Singapore. He started building modern infrasture, system of communications, roads transportations and created jobs. He encouraged foreign investment and facilitated foreign banks and made Singapore a military might as well. He not only successfully encouraged family planning with monetary incentives for the families but turned the unskilled population into highly skilled labour.

Due to highly skilled labour market, manufactring industry has shown a tremendous growth. Due to his fiscal and monitory policies per capita income has improved and it directly affected the standard of living of a common man. Due to good governance and law and order, foreign investment was also increased.

This industrtrial revolution has increased the exports and brought foreign exchange in the country which made Singapore an economic giant in the region. Due to surplus budget, the social sector investment has also increased which further improved the living conditions of the people of Singapore. Lee was truly a man with a character.

Lee Kuan Yew died at the age of 91 on 23 March 2015. Many world leaders issued public condolences. A week-long period of national mourning was declared by the government, from 23 to 29 March 2015. All flags, including the National Flag, were flown at half-mast during the period.

We badly need a true patriotic leadership in Pakistan like Lee Kuan Yew who has eliminated corruption on all levels and made every individual accountable for their actions. Dreaming democracy without accountability in Pakistan will be worse than aristocracy or any other form of government. We need to learn from good practices from other nations as well.

Today, Singapore is one of the greatest nations not only in the region but on the globe as well.

“A nation is great not by its size alone. It is the will, the cohesion, the stamina, the discipline of its people and the quality of their leaders which ensure it an honourable place in history.” – Lee Kuan Yew