We the residents of Pakistan’s federal capital Islamabad are quite fortunate to have been blessed with the Margalla Hills which is a significant part of the National Park area. But unfortunately, we are unaware of it’s worth. Over a period of a decade, we have ripped Margalla Hills off its natural environment.

The custodian of the city, Capital Development Authority (CDA), has been extremely careless in taking care of the green nature of the city. The CDA has played havoc with the natural environment of the Margalla Hills by playing blind to the emergence of housing and hotels in the National Park area, the heart of the Hills. The newly emerged phenomenon of the Metropolitan Corporation of Islamabad (MCI) is another environment unfriendly custodian of the city. The MCI neither cares for what is happening in the valleys nor have the capacity to handle the genuine issues facing the city.

The most important challenge to the city is the rapidly decreasing green cover of the Margalla Hills that is changing the entire character of the federal capital. Often I go to Trail 3 or 5 and come across people on the way hiking, chatting, having a good time, and littering too, unfortunately.

Despite many wakeup calls to the CDA and the MCI on the matter of pollution from littering, nothing was seen. So, I decided to launch a small campaign with a few of my classmates in which we had weekly hiking trips to pick up the littered garbage.

In many cases, we picked the empty water bottles and juice packing and shopping bags in front of the litterers on our way back from hiking. We thought this would help in creating awareness of the harm the spilling of garbage does and to show that some part of humanity and environment friendliness still exists.

The garbage that people leave on the hills and mountains affects the inhabitants and the location drastically in numerous ways.

After attending the National Children Mountain Conservation Meet (NCMCM) for 3 years since 2010, once as a participant and twice as a senior team leader, I have learned that the hills and mountains deserve our utmost care. 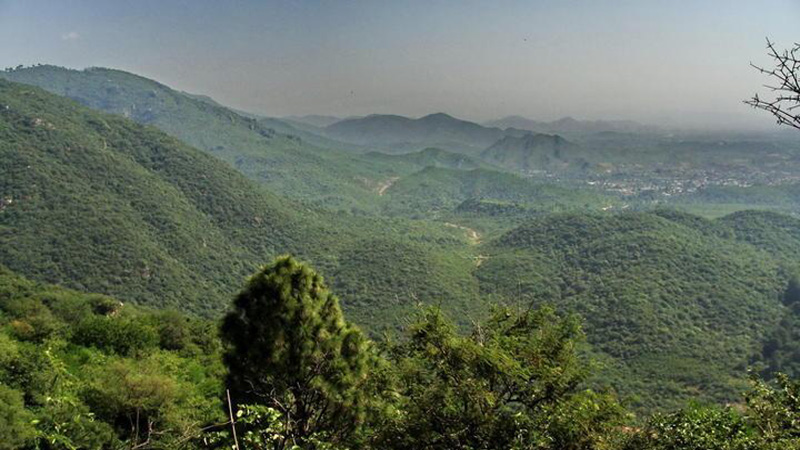 The foremost responsibility is of the visitors. They shall refrain from throwing their garbage there rather shall plant grownup saplings to make them richer of the green cover. It holds a great deal of importance in conserving and maintaining the ecosystems and a good ecosystem helps in combatting the Climate Change by absorbing up the environment’s unfriendly gases.

While being there, I understood the major roles that I had to play for becoming a successful ‘Eco-Guard’, and that is by saying no to pollution, creating awareness about global warming and its effects and, most importantly, saving water.

Eco-Guard is just a simple terminology we used for ourselves, the participants of the National Children Mountain Conservation Meets. And, also I think it’s just my common sense that tells me to not pollute the environment and create awareness about the climate change phenomenon as how and why it occurs and what havoc it plays with the lives and livelihood of the people.

Many of the general readers and common people would ask what an ecosystem is, and why it is important for us, and how we can help in maintaining the mountain’s ecosystems.  Generally, an ecosystem is basically a community of living organisms that interact with all of the other organisms, living and/or non-living, according to their environment and create a system which balances the equation of our natural system. It is important for our lives because it maintains air quality, cleanses and stores water, avoids soil erosion, regulates the climate and also maintains the soil productivity.

With all the devastation in the Margalla Hills, we have become vulnerable to several environmental threats

Other than that, it also abates noise, pollinates crops, maintains biodiversity, supplies habitats for animals and also provides food for the inhabitants. These are some of the important roles an ecosystem plays in our daily lives, which we ignore very arrogantly. And, what helps in maintaining and conserving the mountain ecosystem? The rational behaviour of us is the key to sustaining any ecosystem. Without the ecosystems, how could we think of to survive especially with the mountain ecosystems?

Soil erosion along with no clean air to breathe in, and no habitat for the animals, birds and insects, would lead to disturbed watersheds. It also disturbs the entire food-chain. In this case, we won’t survive. It’s like going through severe diseases. We may fight it for a while but eventually, we will give up.

So, the importance of a proper ecosystem in its minimum stakes is vital for entire life-cycle. Mountains fulfil the requirements of a good ecosystem. They are also known as the ‘water towers’ of the world and source between 60-80 percent of the earth’s freshwater. Many streams and rivers would cease to flow entirely if their headwaters and watersheds were not fed by the seasonal melting of these snows. Such valuable storage of freshwater is vital for all life on Earth.

With all devastation in the Margalla Hills, we have become prone to all the aforementioned dangers that could be caused by damaging the ecosystem. The authorities need to wake up to take stringent measure against the culprits that put up the hills on fire, throw garbage while they go for hiking, and the housing units and hotels established in the Margalla Hills need to be checked for the waste management, and other environmentally unfriendly practices.

The writer is a college student, founder and charter president of the Islamabad Devcom Centennial Leo Club. He can be reached shaarefmunir@hotmail.com