US Iran Deal pullout and its impact on Pakistan 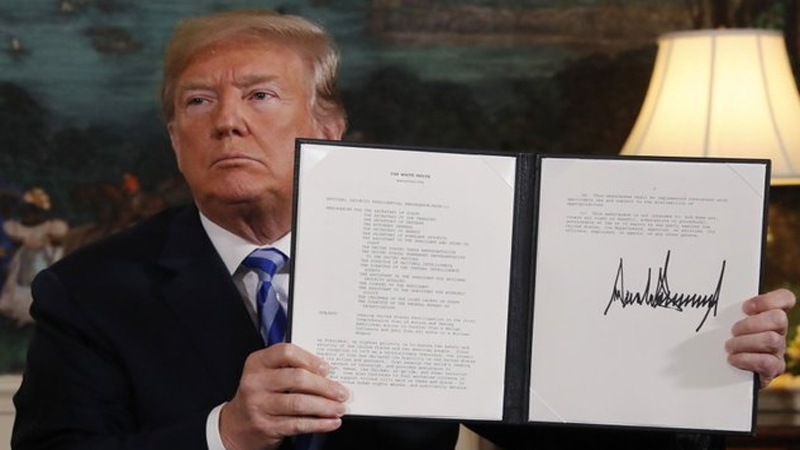 As the global community has come down hard on Donald Trump’s announcement of likely pulling out from the Iranian nuclear deal, Islamabad, too, has weighed in the negative impact of the US President’s controversial move on Pakistan as well as its bilateral relations with Iran, saying the US decision has implications for Pakistan as renewed American sanctions can negatively affect its bilateral engagements with Iran. “Pakistan believes that international treaties and agreements concluded through painstaking negotiations are sacrosanct”, and therefore must be respected.

Foreign Office issued a late evening statement on May 9, which suggested that Pakistan was upset with the Trump administration’s unilateral move. Obviously, it would indirectly result in souring of ties between Pakistan and Iran keeping in view Pakistan’s apparent move of what Tehran believes joining the Saudi camp, especially becoming part of the Saudi-led Muslim countries’ joint coalition force that is meant to counter terrorism in the Middle East region.

The relations between Pakistan and Iran have already seen fluctuations during the recent past, especially in context with Gen Raheel Sharif reportedly raising the Kulbushan issue with the visiting Iranian President. However, following Gen Qamar Javed Bajwa’s Tehran visit, an upward trend was seen in recent months with both neighbours willing to explore options to deepen their trade and commercial ties.

“Arbitrarily rescinding such agreements will undermine confidence in the value of dialogue and diplomacy in the conduct of international relations and the peaceful resolution of disputes.” The statement further read Pakistan believes that the Joint Comprehensive Plan of Action (JCPOA) represents a very good example of a negotiated settlement of complex issues, through dialogue and diplomacy. “We had welcomed the JCPOA when it was concluded and hope that all parties will find a way for its continuation, especially when the International Atomic Energy Agency (IAEA) has repeatedly verified Iran’s compliance.”

Islamabad expressed its hope that the deal would not be scrapped altogether. “We have noted the willingness of the parties in agreement to work together on upholding their respective commitments as stipulated in the JCPOA, despite US decision to withdraw from it,” the statement further said. Pakistan was hoping that lifting the sanctions on Iran would help it complete the crucial gas pipeline project, but with renewed tensions between Tehran and Washington, the multibillion dollar project will certainly face further delay.

Strong reaction against President Trump’s May 9 announcement came not only from inside America but from across the globe. Former US president Barrack Obama was amongst the first to assail Donald Trump, saying “flouting of agreements risks eroding American credibility.” New York Times in its front-page ‘Opinion’ piece by Susan E. Rice said President Trump’s reckless decision to withdraw the United States from the Iran nuclear deal will not force Iran back to the negotiating table, nor will it address serious concerns about Iran’s behavior in the Middle East. But it will leave Iran’s nuclear program unconstrained, and an inconstant America isolated from its allies and far less safe. “The Iran deal has worked as intended.”

France’s Foreign Minister said “the risks of confrontation are real and Europe would act to avoid the explosion (of conflict) that risks happening if… no measures are taken.” Iran’s reaction was prompt and furious as a group of parliamentarians burnt a US flag and chanted “Death to America” inside the Iranian Parliament. China said it will maintain normal economic and trade exchanges with Iran despite Trump’s decision. “Beijing will remain in dialogue with all parties and continue to devote itself to safeguard and implement the deal.” Moreover, Britain Foreign Secretary Boris Johnson urged Washington to avoid taking action that would hinder other parties from continuing to make the agreement work.

According to the International Atomic Energy Agency, the United States intelligence community, the United Nations Security Council and the president’s top advisers, Iran has fully complied with its obligations. “As required, Iran relinquished 97 percent of its enriched uranium stockpile, dismantled two-thirds of its centrifuges and its entire plutonium facility, abided by the most intrusive international inspection and monitoring regime in history, and forswore ever producing a nuclear weapon.” Now, says Susan, President Trump has ceded the moral high ground and freed Iran from all those constraints. Iran will be able to resume its nuclear activities without being blamed for violating the agreement. “This agreement was never about trust. It is about stringent verification – in perpetuity. The deal effectively cut off all potential pathways for Iran to acquire a nuclear weapon.”

Guardian’s Michael H Fuchs said, “Trump just manufactured a national security crisis for no reason.” Atlantic’s David Frum wrote, “Trump has never valued allies or partners. The only relationship he understands is one of power: he commands, others obey. President Trump has just pushed the plunger on a sequence of crises.” He added, “hopes that Trump would be contained by his aides and advisers have long since been exposed as unrealistic. Trump is being Trump, the chaos president drawing the world into chaos after him.”

Syed Mohammad Marandi, a professor of English Literature and Orientalism at the University of Tehran, in his article “Why ‘Death to America?” said that US president Donald Trump has a problem with ‘Death to America’ slogans. Is the widespread desire of ordinary Iranians to end US arrogance, duplicity and hegemony that difficult for Donald to grasp? “If western countries shut their doors, there are other doors opening to Iran and the ultimate biggest loser in this process will be the US, a weak and submissive Europe, and their erratic regional client regimes. The choice is theirs to make.”

Salman Shoaib, a Pakistani writer who has graduated from Brown and Cambridge universities and is the managing director at a fund management company based in Singapore, said in his article “Trump has opened the door to war” published in the Express Tribune on May 9, said it is true that Trump never liked the Iran deal, and also simply wishes