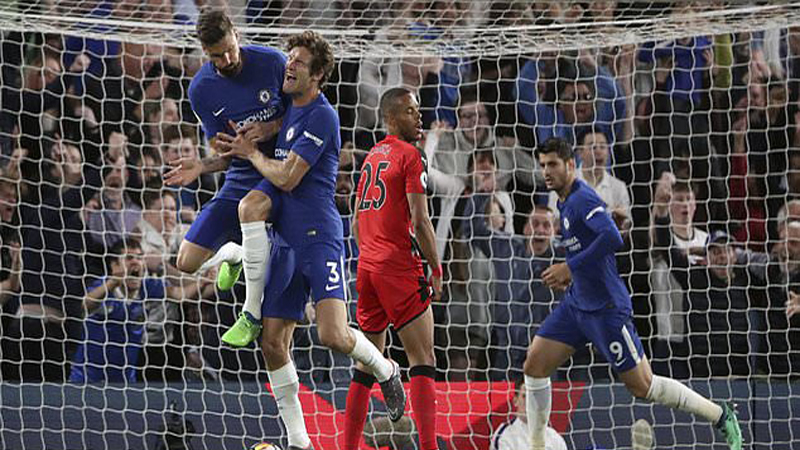 LONDON: Huddersfield Town were left celebrating wildly after securing their Premier League safety on Wednesday with a dramatic and resilient 1-1 draw at Chelsea, a result that looks almost certain to condemn Swansea City to relegation. With a Harry Kane goal giving Tottenham Hotspur a 1-0 win over Newcastle United at Wembley to secure their Champions League place for next season, Chelsea’s draw may also have caused fatal damage to the Blues’ hopes of a top-four finish. Meanwhile, champions Manchester City said a fond Etihad farewell to Yaya Toure, routing Brighton & Hove Albion 3-1 and moving on to 97 points – the most in a Premier League season – and to the verge of a landmark 100-point campaign. In doing so, Pep Guardiola’s men, 20 points clear at the top, also set a new record for most goals in a season in the Premier League era, with strikes from Danilo, Bernardo Silva and Fernandinho taking the tally to 105.

Yet Huddersfield were the toast of the league after the side who achieved a fairytale return to the top division last season ensured survival with a second consecutive backs-to-the-wall effort after earning a draw at Manchester City on Sunday. They had gone ahead against the run of play through Laurent Delpoitre soon after halftime but a freakish, fortunate equaliser for Marcos Alonso was the signal for Chelsea to bombard their goal. The Terriers ended up being eternally grateful to goalkeeper Jonas Lossl, who dazzlingly tipped an Andreas Christensen header on to the post in a moment that will go down in the Yorkshire club’s folklore.

Swansea need
miracle: Huddersfield soared into 16th place on 37 points, four clear of 18th-placed Swansea, who now have to rely on what manager Carlos Carvalhal has called a “miracle” if they are to survive. It also ensured that for only the third time in the Premier League era, the three promoted sides – in this case, Huddersfield, Newcastle and Brighton – all survived. Technically, Southampton, on 36 points, are still not safe but only if they lose so heavily at home by Manchester City and Swansea score enough against Stoke to effect a 10-goal swing can the Saints go down. It was a gloomy night for Chelsea and their manager Antonio Conte, whose future at the club remains the subject of conjecture, as they remained fifth in the Champions League race on 70 points. Spurs moved on to 74 to be certain of their spot and now Chelsea have to rely on the slim hope that they win their last match at Newcastle on Sunday while Champions League finalists Liverpool, on 72, lose at home to Brighton. In Arsene Wenger’s penultimate match as Arsenal manager, the Gunners suffer yet another wretched away day, losing 3-1 at Leicester City while having to play for 74 minutes with 10 men following a straight red card for Konstantinos Mavropanos. It left Arsenal as the only side in English league football to fail to win a single away point in 2018, having lost all seven road games before Wenger’s farewell after 22 years with the club at Huddersfield on Sunday.