Besides being a calligrapher, Hira Lal was an outstanding scribe, and all his works were embedded with an allusion to calligraphy

Lithography was introduced to Italy in 1817 by some small publishing houses. Its advent in India took place in the second decade of the 19th Century. While Italy was making great progress in the field with Rome, Florence, Bologna, Moderna and Naples emerging as major centres, India was not lagging behind either.

Back home, Hira Lal Bhargav should be considered among the pioneers of the lithography movement. With the publication of his books in Persian, Urdu and Hindi in the last three decades of the 19th Century, he made effective inroads into the movement.

Hira Lal Bhargav Monis, younger brother of Punna Lal Nazim, was born in Jaipur in the year 1853 (1910 Bikram Sambat). He had written his biographical account in his much acclaimed book — Tughraha-i-Nastaleeq — which is considered a standard source of facts in this field. 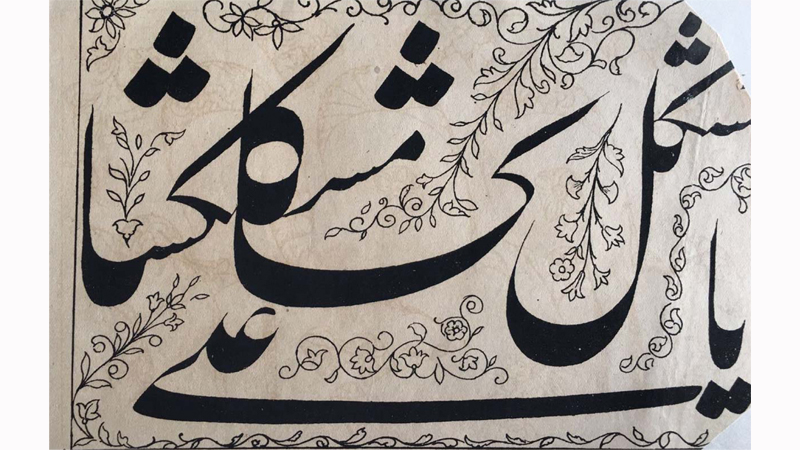 He learnt Urdu and Persian at home and calligraphy from Munshi Bihari Lal. His ancestors were the Bhargav Brahmins of Kote Qasim and known as Dhoosers, because they hailed from Mount Dhosi. His father, Munshi Ram Jiwan (author of the Mathematical dissertation – Nadir-ul-Hisab), studied at Jaipur Madrasa under the guidance of Pandit Sheodin, who was once the Prime Minister of the Jaipur State, a Munshi Saroop, Superintendent of School and a member of the Jaipur Council.

Besides being a calligrapher, Hira Lal was an outstanding scribe, and all his works were embedded with an allusion to calligraphy. He established a lithographic press, Matba Siraj-ul-Faiz, in 1887 (1305 Hijri) which eventually became famous as the Hira Lal Press and remained active even after his death in 1921, until 1932. His press published his own books and that of his brother and other authors. He delivered a praiseworthy job in the promotion of Urdu and the Persian languages. 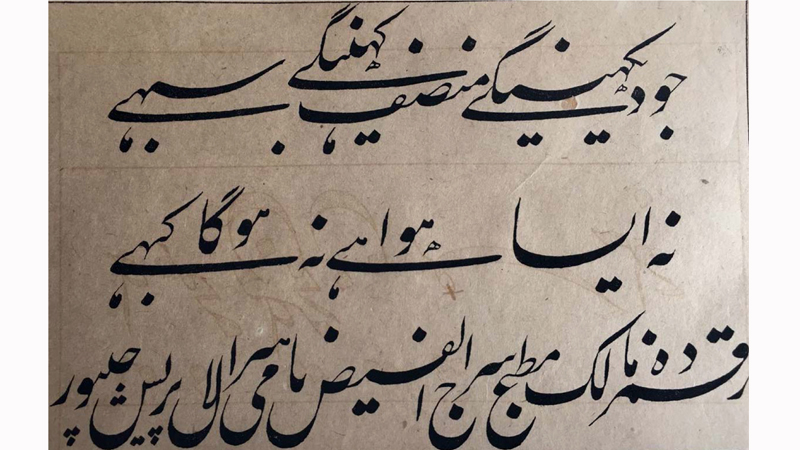 His keenness towards the work can be seen in the vast collection of calligraphic specimens, each different from the other. His work ranges from proverbs in Persian, Arabic, Urdu and Hindi to the Islamic texts and Quranic verses. He appeared quite at home in inscribing Persian maxims such as Waqt Nami Manad Harf Mi-manad (Time passes but word remains); Maal-i-Arab Pesh-i-Arab (One’s treasure must be with him only); and Tool Ae Jaan-i-Jahan Afzoon Baad (O, my dear! fly higher and higher).

His profound knowledge of Arabic can be seen in the Islamic Kalima (confession of faith) that he had marvellously inscribed. He never vacillated in admiring the leaders of other faiths or learning their languages. 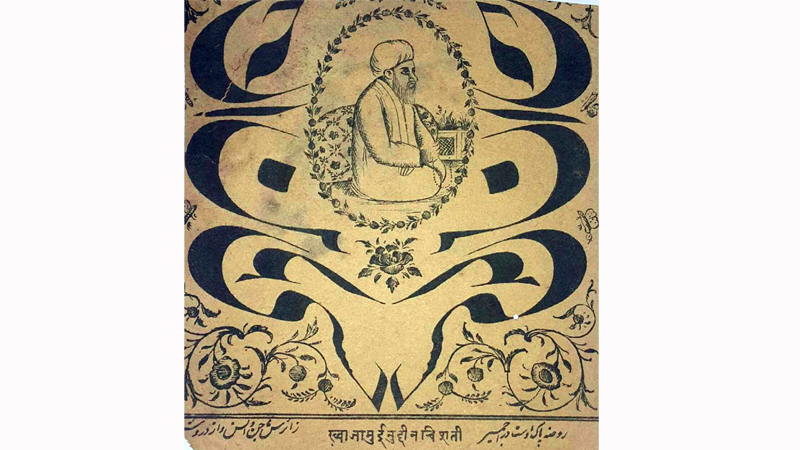 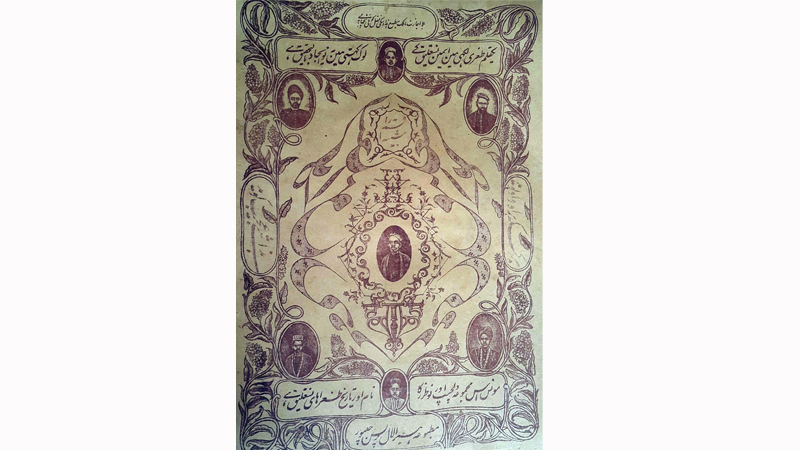 His style of producing mirror images was distinctive and intricate, and on account of such a knack, some of his images are hitherto indecipherable.

There is an immense use of poetry in his calligraphy; and he lavishly quoted notable Persian poets like Rumi, Jami, Ameer Khusro and Mirza Ghalib in his works.

He was predisposed to compose poetry since his days as a student. The majority of his compositions could be traced in contemporary literary journals. His poetry had elements of innovation, and the compositions imbibed the common issues of human life and presented them from an inventive angle. He had a flawless language which was laced with even narratives. He dabbled in mystic poetry also and attempted to portray the mysteries of love and beauty. He was no less when it came to put forward the facts of life.

He had written several books, the major among them are — Aqwaal-i-Sufiya (Persian), Katha Sambodhni (Persian), Risala-i-Hiyat (Persian), Tughraha-i-Nastaleeq (Persian), Dharam Karam Nishtha Wale Bhagton Ki Katha, Yatra Darpan and Ath Khath Roop Mukat. Besides these he edited and translated Sirr-e-Akbar, the magnum opus authored by Mughal Prince, Dara Shukoh. In 1908, he started a monthly journal, Dharm Tatva Parbodhni, which continued until 1911. Raaz-i-Zindagi, a Lahore-based journal, had carried out a painstaking review of Dharm Tatva Parbodhni in which it appraised the contents of the journal.

His oeuvre (whose major chunk is a part of the present author’s private collection) is a vast source of knowledge to those pursuing the nuances of lithography and calligraphy, and enables the scholars to have a look at an era gone by.

The writer is freelance based in Jaipur, India. He can be reached at faizan.raza1001@gmail.com