The futility of military action in Afghanistan

If the US desires to attract the Taliban to the negotiation table, it must explore avenues for political settlement rather than embarking upon a military expedition with little or no chances of success

The US policy for South Asia and Afghanistan is to execute harsh military action against the Taliban in order to force them to the negotiation table. This strategy seem to be oblivious to certain ground realities which could directly impact the outcome. A closer look as to how Afghanistan has developed over the past few years indicates that the US has probably based its approach on the following facts and optimistic assumptions.

Foremost is the growing capacity and capability of 352,000 Afghan troops, which have already completed three years of full service and are now read to be effectively incorporated into the US military’s designs. Secondly, an increasing number of Taliban commander fatalities in Afghanistan signifies that the organisation is run largely from within Afghanistan and can be defeated. The US also believes it can restrict the organisation’s support bases in the country, including those that have propped up to counter ISIS.

Strangely, this strategy remains absent from the testimonies given by US Secretary of Defence James Mattis and Joint Chief of Staff General Dunford to US congressional committees. Perhaps this is because they know that the strategy grossly underestimates the Taliban’s support nodes inside Afghanistan. There are also other factors which make it unlikely that the US’ Afghan strategy will be successful.

Practicability of insurgent operations and sustainment in the North, Centre, West and South of Afghanistan hinges upon the ease of movement and the presence of sanctuaries within Afghanistan. The inability to inhibit this ease is purely an Afghan affair and an abject failure. This is despite a major Taliban stronghold in Southern Helmand and Northern Baghlan province being surrounded by Government controlled or influenced areas. Furthermore, the one million people living in insurgent controlled, influenced or contested areas provide a never-ending supply of recruits. 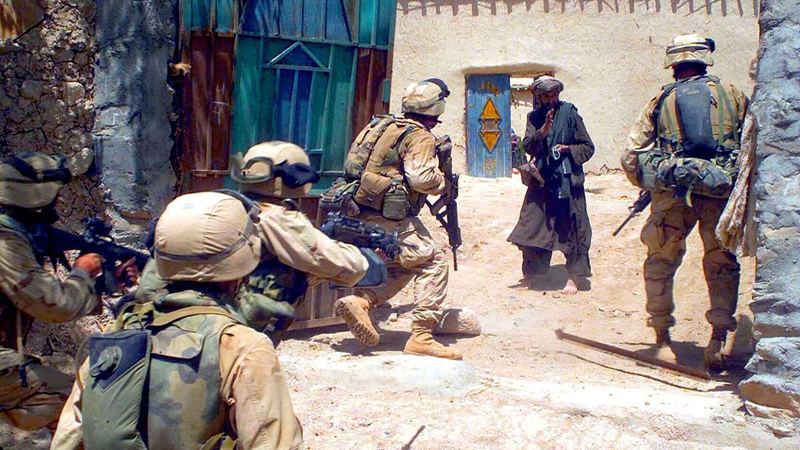 Recently, Afghan politician Hamid Gilani stated that all members of the Taliban leadership Council are present in Afghanistan. Even the two-year plan as disclosed by General Nicholson in November 2017, sets the objective of reducing Taliban control or influence to 20 percent from the current 30-35 percent. The question thus arises, why would and should Taliban even risk border crossing to recuperate when they have large areas and populations under their control; at least for the next two years as per General Nicholson’s plan.

The recent NATO strikes against narcotics facilities are merely an illusion. To effectively control the poppy farm gate income of $1.34 billion, NATO and the Afghan government would have to establish their writ on every acre of cultivatable land, which is likely to remain a distant dream. In November 2017, General Nicholson admitted that 60 percent of Afghan opium does not flow out through Pakistan but is routed out through Iran or Northern Afghanistan.

The most audacious step taken towards establishing lasting peace in the region is Pakistan’s ongoing border fencing of the Durand line. This will not only curtail illegal movement of people and goods but will also bust the myth of ‘Taliban cross border sanctuaries’. If the US is sincere in its Afghan strategy and believes in the allegations it has been levying on Pakistan, then the US must not only counter Afghan opposition to the fencing but also extend material support to Pakistan.

The most audacious step taken towards establishing lasting peace in the region is Pakistan’s ongoing border fencing of the Durand line. This will not only curtail illegal movement of people and goods but will also bust the myth of ‘Taliban cross border sanctuaries’

The Afghan authorities also claim that ISIS terrorists from the Middle East are finding their way to Afghanistan. Other regional players who ensured the liquidation of ISIS in the Middle East, are surely not going to stay silent about the terror groups presence in another neighbouring country. Pakistan has effectively sanitised all territory suspected to still have remnants of terror groups; meanwhile, US and Afghan forces have been battling ISIS in Nangarhar province since 2014. This area roughly equals the area of Kurram and Khyber Agencies combined. The inability of foreign and local forces to clear small pockets of terrorists in Afghanistan, despite sustained military operations puts a question mark on their credibility.

Though the authorised strength of the Afghan forces gives a spectacular figure of 0.35 million, the strength of its six Army Combatant Corps is a mere120,000 with some additional 20,000 Special Forces. This is far less than what would be required to effectively control Afghan borders and counter Taliban’s diversely spread economic interests and areas of influence in the country.

The diversification of the Taliban in Afghanistan has been confirmed by are port of Special Inspector General for Afghan Reconstruction (SIGAR) dated February 15 2017, according to which, out of 13 Taliban controlled districts, only one borders Pakistan. The report also highlights that major Taliban strongholds are deep inside Afghanistan and along other international borders. Contrarily, even holding the controlled territory is difficult for Afghan forces as reflected in the decrease in Afghan area under Government control from 80 percent to 60 percent since January 2015, when Afghan forces took full security responsibility in Afghanistan.

Recently, Russian Envoy to Afghanistan Zamir Kabulov highlighted that the Afghan Taliban buy weapons from Afghan Army and Police stocks, meaning that all they need to arm themselves is money. Corruption takes care of all the logistical issues involved. Russia has also raised concerns over the disposal of Russian supplied weapons to Afghan forces which are now being replaced with US made weapons. Interestingly, in 2014 SIGAR reported that more than required and authorised weapons were actually called in for Afghan Forces; thereby creating a surplus of thousands of weapons in Afghanistan’s corrupt system — which is also notoriously bad at record keeping. No doubt, that such weapons could also be acquired by Daesh, the TTP and other terrorist organisations operating from Afghan soil and threatening regional peace.

It is evident that the Taliban insurgency is indigenously grown, supported and sustained; while the US and Afghan forces capability to militarily defeat it is limited. Therefore, if the US desires to attract the Taliban to the negotiation table, it must explore avenues for political settlement rather than embarking upon a military expedition with little or no chances of success. Failing to do so, the Taliban are likely to survive anything the US military offensive throws at them, making the negotiations process even more complex.