The chances of a direct confrontation between the US and Russia are very negligible. This isn’t exactly the beginning of a new Cold War

‘The use of chemical weapon is extremely inhumane, and we cannot absolutely tolerate that. Japan supports the determination of the US, the UK and France not to allow the use and proliferation of chemical weapons.’

On April 14, China’s Foreign Ministry declared that it opposed ‘the use of force in international relations’ and ‘any unilateral military action bypassing the (United Nations) Security Council.’ China urged all parties involved to ‘resolve the issue through dialogue and negotiation.’

Venezuela’s government said it ‘energetically condemns’ the attack on Syria, calling it a unilateral action that violates Syria’s sovereignty and ‘the most basic norms of international law.’ 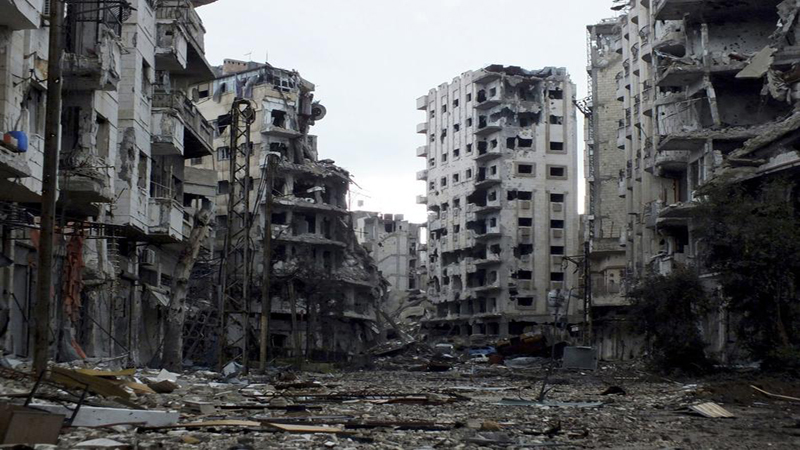 There was a lot of hue and cry in Pakistan and India against the strikes. An editorial entitled ‘Endgame in Syria’ published in Pakistan’s famous daily The Nation stated:

What purpose do these strikes fulfil at all? At best, one can call these air attacks as a face-saving move by the West. Before the latest US, UK and French air attack, military action in April 2017 was conducted when usage of chemical weapons was reported in the town of Khan Sheikhoun. Back then too, the US bombed regime-operated Shayrat airfield. Nevertheless, the situation on the ground tells that the US-led strikes did not achieve anything for the civilians.

In fact, American attacks received a negative response from the Syrian people. Above all, Bashar-al-Assad and his regime gained from the strikes…. the masses wonder why chemical attacks constitute a ‘red line’ to the West, that have taken only a fraction of the total killings, but not the barrel bombs and live artillery that has brought havoc in their lives. The scepticism among the people of Syria is growing day by day as far as Western response to the violations by the regime is concerned. They see the West as a mere spectator in the killing fields of Syria. The inability of the West to make peace in Syria means that its endgame in Syria is a perpetual civil war.

On April 14, 2018 Pakistan stressed the ‘need to respect the sovereignty and territorial integrity of Syria’ in the wake of joint strikes by the United States and its allies in retaliation for the alleged chemical weapons attacks by Assad.

Pakistan has signalled that it believes a ‘clear policy of diplomacy should be adopted in solving the Syrian crisis’.

Pakistan’s policy is that ‘it does not interfere in another country’s internal affairs. If the need arises, Pakistan will play its diplomatic role in resolving the Syrian problem’.

It remains unclear how far the United States would go in trying to shape events in Syria. There are about 2,000 American troops in Syria to fight the Islamic State, but not to play a role in the civil war. In public comments before the airstrikes, President Trump said he wanted to pull them out right away. Advisers urged him to hold off, and he gave them five to six months to complete a withdrawal.

It isn’t clear what the overall Syria strategy is. Hopefully, a comprehensive strategy will be formulated soon to bring the civil war to an end. A negotiated peace settlement will have to get both Iran and Russia onboard. However, this is easier said than done

On April 17, 2018 President Trump stalled a preliminary plan to impose additional economic sanctions on Russia. Earlier, Russian lawmakers were crowing on April 13, 2018 that they were going to make the United States pay for already-imposed sanctions, potentially by blocking American imports or U.S.-Russian aerospace cooperation or allowing Russians to violate U.S. intellectual property rights. Russia, one top lawmaker promised, was going to ‘hit the Americans in the gut.’

But on April 17, 2018, senior lawmakers in the lower house of parliament, the State Duma, decided to hold off until May 15 before considering any counter-sanctions against the United States. Speaker Volodin said the Duma needed to meet with experts and the business community first.

Meanwhile, inspectors from the OPCW have still not reached the area, days after arriving in Damascus. The inspectors are going to the scene to take samples and interview people, but ‘they are currently being prevented from doing so by the regime and the Russians,’ Prime Minister May of Britain said in Parliament on April 17, 2018.

A Syrian government supporter holds up a Syrian national flag following US, British and French military

The US-led attack on alleged Syrian chemical weapons facilities raised a question around the world: What next?

After the airstrikes late last week, mixed messages from the administration have meant it’s not entirely clear, particularly how the White House will react to any further chemical weapons attacks, and when and how the US will exit Syria.

Meanwhile, Saudi Arabia is holding talks with the United States about sending troops into Syria as part of a wider international coalition. On April 18, 2018 al-Jubeir, Saudi foreign minister, said the deployment offer was ‘not new’, adding that Riyadh had previously proposed the idea to former US President Obama.

Earlier, Saudi Arabia had announced its readiness to deploy ground troops in 2016 to fight the Islamic State in Syria.

While Saudi’s air force partook in the aerial campaign aimed at defeating Islamic State from the very beginning in 2014, Saudi Arabia stopped short of a full ground troop deployment.

President Donald Trump was now looking to assemble an Arab force that would include Saudi Arabia and the United Arab Emirates to replace US military presence in Syria.

The force, which Trump’s new National Security Adviser Bolton hopes will include Egypt, would oversee stabilising the north-eastern part of Syria, according to the report. It isn’t clear what the overall Syria strategy is now. Hopefully, a comprehensive strategy will be formulated soon to bring the Syrian civil war to an end. A negotiated peace settlement will have to get on board both Iran and Russia.

However, it is easier said than done. President Trump would like to distract American public opinion from his many domestic problems and acting tough and decisive on Syria makes a lot of political sense. Plus, there is indeed public anger over Russia’s support of Assad which can be galvanises the possibility for a wider international response. But allies are more apt to make diplomatic threats than do anything on Syria.

There doesn’t seem to be widespread agreement among the allies for a war. To gather together a wider international coalition, President Trump would need to do much more. He would need put together a strategy on Syria. However, that isn’t happening yet. Allies like Saudi Arabia, UAE and Jordan aren’t willing to contribute much for the President Trump strategy, if it is ever materialised in the first place. Probably, ‘all options are on the table’ rhetoric would just mean another limited strike in Syria.

The Syrian conflict is the theatre of a proxy war between the US and Russia. The chances of a direct confrontation are very negligible. It isn’t exactly the beginning of a new Cold War between the US and Russia. Notwithstanding the claims of President Trump, the US and its allies aren’t opening a war front with Russia and its ally Iran in the Syrian territory. However, the US, Britain France, Saudi Arabia, UAE, and Israel will likely take further measures to contain Russian influence in the region. Therefore, an actual war in the region is very unlikely.