This is the age of media and information. Increasingly, for most of us in our forties and older, a sense of being out of date and out of step with ever changing and improving technology overwhelms us, and the more we try, the more we realise we would never catch up.

On the other hand, younger people below 35 years of age find it incredibly simple to handle gadgets and before we know it, they have not only explored everything about a particular device but have also mastered its use without the need for cumbersome and complicated ‘how to do’ manuals.

The education pundits fully realise the need for gadget-based multimedia and computer generated audio-visual software for educating children, as this is the era of technology. There is now an urgency to make our schools tech-savvy and rightly so, since technology is a symbol of progress and if a school offers technology, chances are that it must also offer real education that matters.

However, in this race of technology, are we forgetting tales from grandma, which were part of every child’s bedtime stories? Bedtime stories have a very deep and profound effect on a child’s mind. The old bedtime stories are increasingly being replaced by aggressive and violent games, cartoons, movies, and other web-based computer generated media. Media is engaging all of us — from bedtime entertainment of children to politically charged chat shows on numerous channels occupying the adults.

Interestingly, with much work and little time for individuals to carry out research on their own, our source of truth, morality and reality is limited to media and media alone. Jim Morrison of the band The Doors warned us exactly about this fact when he said, “Whoever controls the media controls the mind”. Are we being mind-controlled by oligarchical interests pursuing hidden agendas and lucrative profits? Perhaps we all need to invest some time and effort in exploring this possibility further.

In 1951, Lord Bertrand Russell, who also worked for some time with the Frankfurt School undertaking work in the area of mass social engineering, explained in his book The Impact of Science on Society, “I think the subject which will be of most importance politically is mass psychology…. Its importance has been enormously increased by the growth of modern methods of propaganda. Of these the most influential is what is called ‘education.’ Religion plays a part, though a diminishing one; the press, the cinema, and the radio play an increasing part…. It may be hoped that in time anybody will be able to persuade anybody of anything if he can catch the patient young and is provided by the State with money and equipment.”

In 1961, Professor Aldous Huxley of the California Medical School, San Francisco, declared, ‘There will be, in the next generation or so, a pharmacological method of making people love their servitude, and producing dictatorship without tears, so to speak, producing a kind of painless concentration camp for entire societies, so that people will in fact have their liberties taken away from them’

Just as the media and mind-controlling interests would want, on the whole, the child now spends more time watching and listening to material generated not by primary and other care givers but by business interests which may or may not be worried about child’s overall well being. The last woman standing between the onslaught of media and child was the grandma, who is now getting sidelined since the child, even if physically present with her, is likely to have earphones inserted in his/her ears, successfully blocking out grandma and her stories.

In explaining the factors that affect mind-controlling efforts of the corporate entities, Lord Bertrand Russell stated, “the influence of home is obstructive. Secondly, not much can be done unless indoctrination begins before the age of ten. Third, that verses set to music and repeatedly intoned are very effective. Fourth, that the opinion that snow is white must be held to show a morbid taste for eccentricity. But I anticipate it is for future scientists to make these maxims precise and discover exactly how much it costs per head to make children believe that snow is black, and how much less it would cost to make them believe it is dark gray…. when the technique has been perfected, every government that has been in charge of education for a generation will be able to control its subjects securely without the need of armies or policemen.”

Current lifestyles and economic hardships have forced both parents to work long hours. As a result, young children including the ones below the age of ten are now in the hands of media and gaming corporate giants for whom the primary purpose is to generate profits at all costs, and even the greatest sense of ‘corporate social responsibility’ does not change this economic reality. As a result, all parental efforts to give their children religious and moral values not in tune with media messages are likely to be derailed.

Closely integral to media is art that can be effectively used to convey a message sometimes with the purposes of indoctrination of mind for specific and most of the times profitable objectives. Within this powerful world of art, there is music, which seems to be the most potent of all art forms to convey a message. Just as Lord Russell had pointed out the significance of using music for indoctrination of the human mind, the 6th century Roman scholar Anicius Manlius Severinus Boëthius said, “No path to the mind is as open for instruction as the sense of hearing.” 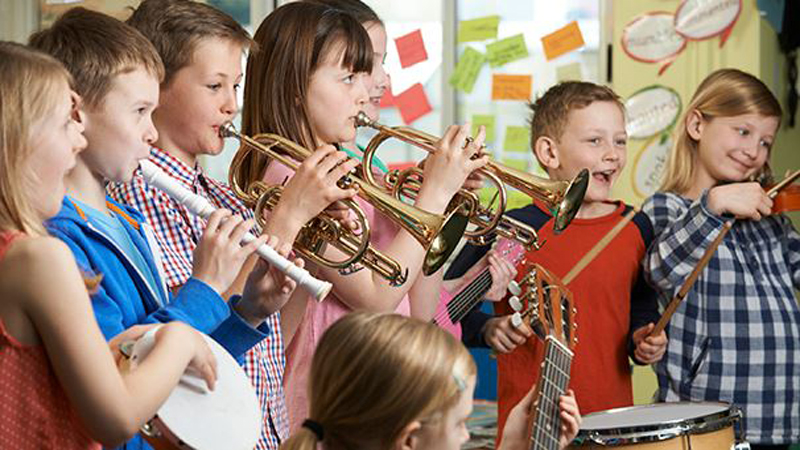 Since our sense of hearing is most conducive to our learning, it also means there are serious implications for the art form related to hearing — Music is the art that engages our sense of hearing and experts believe it is critical to the success of any indoctrination program.

The Greek scholar and philosopher Plato explained this phenomenon, “Education in music is most sovereign, because more than anything else rhythm and harmony find their way to the inmost soul and take strongest hold upon it”.

It is not without a good reason that sufis and saints have always used music for their Islamic spiritual progression and flight of the soul. As Ludwig van Beethoven said, “Music is the mediator between the spiritual and the sensual life.” Similarly, Hector Berlioz declared, “Which of these two powers, love or music, can elevate us to sublime heights? Why separate them? They are the two wings of the soul.”

While music has immense spiritual, healing and psychotherapeutic benefits, it also has its dark side if wrong kind of music is heard. David Livingstone in his book History of Terrorism explains, “(music) it had long been long been used in the occult mystery rites to enflame the passions and rile the worshipper into a trance state of demon possession. These qualities were recognised by the Illuminati researchers of the Frankfurt School as powerful for indoctrination purposes. Essentially, music can be used to reduce the listener to a state of emotional immaturity, which renders him susceptible to the message it contains.”

Livingstone further mentions the factors that are instrumental in establishing a musical track as a hit, “Repetition of format was the key to popularity, and the play list determined the ‘hits’, and repetition could make any form of music, or any performer, a ‘star.’

Similarly, for all media related programming especially on Television, experts at the Radio Research Centre at Princeton determined that as long as a familiar form or context was kept, almost any content would become acceptable to the viewers. Furthermore, stars, and soap operas are ‘cyclically recurrent’ and rigidly invariable types…. specific content of the entertainment only appears to change.

All television programming contains, first, an overt message, referring to the plot, characters, scene, etc. It is in this overt content that successful formula are employed to guarantee viewership. But within this overt content, there lies a ‘hidden message’ that is less obvious, and which represents a particular moral theme for purposes of indoctrination

As pointed out by Lord Bertrand Russell, the mass social engineering experts believe that with education and media as the prime propaganda tools, and ample financial resources at their disposal, they are able to condition human mind at a macro level to act in a certain ‘predictable’ manner just as desired by giant corporations funding social engineering research for specific purposes.

In 1961, Professor Aldous Huxley of the California Medical School, San Francisco, declared, ‘There will be, in the next generation or so, a pharmacological method of making people love their servitude, and producing dictatorship without tears, so to speak, producing a kind of painless concentration camp for entire societies, so that people will in fact have their liberties taken away from them, but will rather enjoy it, because they will be distracted from any desire to rebel by propaganda or brainwashing, or brainwashing enhanced by pharmacological methods. And this seems to be the final revolution.’

The combination of music, media and education is all that is needed for mass mind controlling endeavours and unfortunately, in today’s day and age it is the only combination we can use to learn about our world and beyond. The British journalist John Pilger in his documentary, The War You Don’t See tried to demonstrate how media quite often creates deception for our minds, and this is an on-going process. The war of the media and the mind goes on.

The writer is a saxophonist, visiting professor at NCA, scriptwriter, voice-over artist, and a member of the AUTAQ Policy Think Tank on Culture under the Lok Virsa