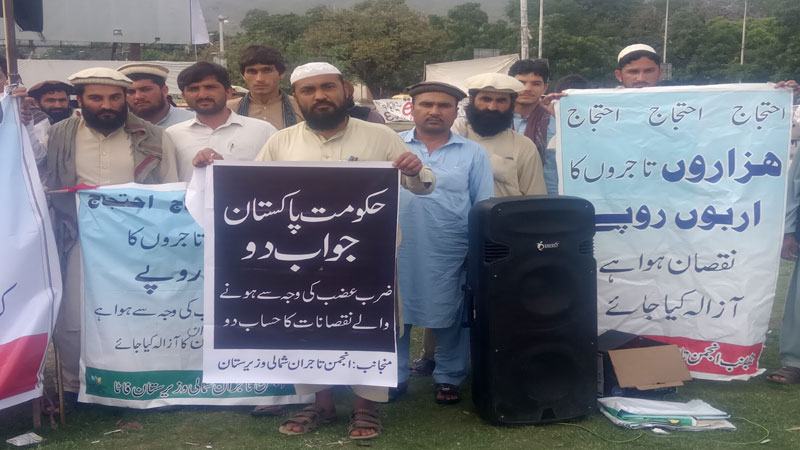 ISLAMABAD: Over 1,000 tribesmen, mainly shopkeepers and members of the business community, from North Waziristan are protesting in Islamabad against losses to their businesses during military operation in the region, vowing to continue their sit-in until they are paid compensation.

“We had to leave our hometowns and booming businesses in Miranshah, the headquarters of North Waziristan Agency, Mir Ali and other parts of the tribal region on a short three-day notice when the military launched Zarb-e-Azb offensive against Taliban back in 2014,” said Imshad Dawar, member of the Traders Association of North Waziristan, a group of 20,000 businessmen from the region.

He recalled that the military operation triggered mass exodus, forcing thousands of families to live as internally displaced persons (IDPs) in down districts. “But we found our shops demolished and belongings disappeared or looted when came back after three years.We lost billions of rupees in our small businesses during displacement,” he said.

“We have employed every democratic option to get our rights but no one is listening. We have now decided to stage a sit-in in Islamabad until our legitimate demands are met,” said Shah Behram, another businessman and tribal elder from North Waziristan.The aggrieved businessmen held series of meetings with political agent of North Waziristan, senior military officials in the region and Bannu divisional commissioner but their issue could not be resolved, he added.”We have been deprived of our livelihood for no reasons. We demand the prime minister and chief of army staff to take personal interest to get our issues resolved,” he noted.