Making peace in Afghanistan is not possible sans the backing of regional and international players, crucial among which are the US and Pakistan

Kabul’s policy towards Afghan Taliban took a new turn lately. A pragmatic approach to end the protracted war was adopted when President Ashraf Ghani made a peace overture to Taliban unconditionally. They were offered security along with other incentives for the sake of saving the country. Nevertheless, it was answered with a cool response from the other side. But as a matter of fact, making peace in Afghanistan is not possible sans the backing of regional and international players, crucial among which are the United States and Pakistan.

Theoretically, the US has shown its full support for the Afghan-owned and Afghan-led peace process, but its actions do not chime in with its words. President Donald Trump, who pledged to shrink the US involvement in Afghanistan during his campaign for the office, increased the number of troops by more than 3000 last year to carry on the war with more vigour. According to a US general in Kabul, a dramatic increase will follow in 2018. Subsequently, the law and order situation was aggravated due to military actions. Many suicide attacks, bomb blasts, and clashes between Taliban and Afghan soldiers eventuated.

The US is not making Pakistan a scapegoat for its own failures, but for the ‘New Great Game’ being played in Afghanistan

Furthermore, the ISIS found a strong foothold in Afghanistan in the presence of international forces, the regional and global threats of which are being unfolded now. This has added to the grievances and misgivings of the regional powers. Russia has even sought an explanation from NATO and the US forces about the movement of unmarked helicopters in places known for the presence of ISIS fighters.

The United States also urged India to help in strengthening and developing Afghanistan. Pakistan already regards the Indian presence and clout in Kabul with suspicion and trepidation. About 4000 of Afghan army officers are India trained. The Afghan Air Force has been provided with helicopters by the same country. New Delhi has set up tens of consulates on Pak-Afghan border, allegedly, to foment terrorism across the border. All these have a bearing on Pakistan’s attitude towards Kabul. Still, asking India to do more in Afghanistan would certainly be provocative for Pakistan. 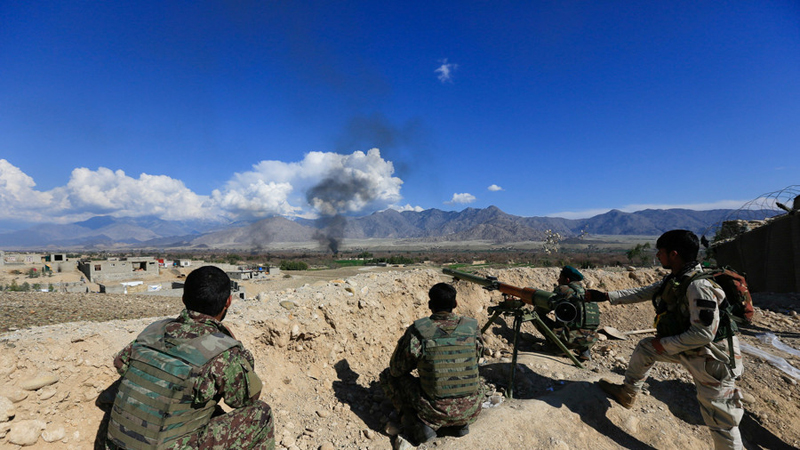 Likewise, the TTP and the Baloch separatists have the backing of spheres within the Afghan government under the watch of the US. For destabilising Pakistan, a nexus between the Afghan Intelligence agency NDS and RAW is an incontrovertible fact. TTP and other anti-Pakistan terrorist organisations use the Afghan soil as a base to execute attacks in Pakistan. Reservations have already been conveyed to the Afghan government and US in this regard but to no avail.

So of the two countries critical for peace in Afghanistan, the sincerity of one is questionable while the other has been pushed to the wall. The US is not making Pakistan a scapegoat for its own failures but, apparently, for the ‘New Great Game’ being played in Afghanistan.

It seems like the US is cashing in on perilous situation in this strategic country to counter Russia and China — countries painted as rival powers in US National Security Strategy document. Tug of war between the United States and Russia in Afghanistan is becoming visible as the US blames Moscow for supporting and arming Taliban. For keeping a check on both Moscow and Beijing, a volatile Afghanistan which should ensure the US’ longstanding presence, and strategic cooperation from India would help.

Instability in Afghanistan has brought terrible inflictions upon Pakistan. That’s why it is awfully keen for a stable and well-balanced Afghanistan. The belligerency has made it easier for elements involved in terrorism and anarchism in Pakistan to find safe havens in the battle-scarred country. Not only is peace, our economic, social, and political development are also at stake because of the precarious circumstances in the war-ravaged country. It has a significant role in transforming Pakistan into a security state. TAPI gas pipeline and CASA-1000 are of vital importance to our crying need for energy which comes through Afghan soil, while most of the projects and routes of CPEC are also in proximity to Afghanistan. In addition to that, it is our gateway for trade with energy-rich Central Asian Countries. But in the end Pakistan, in spite of being dependent on Kabul for its peace, stability, development, and many more things would never stand up for a solution which would sandwich it between India and a pro-India, anti-Pakistan state.

The United States needs to understand Pakistan’s concerns for meaningful progress in the reconciliation process. The intelligence liaison between NDS and RAW for fuelling terrorism should be dismantled, and the practice of patronising groups responsible for terror acts in Pakistan must be put an end to. As Pakistan has been blamed for US’ and Kabul’s failures in Afghanistan, many Afghan people harbour anti-Pakistan feelings. Thus saboteurs hostile to our country get aid and comfort from the general public with ease. It needs to be changed as well for Pakistan’s unstinting support for rapprochement in Afghanistan.

Diminution of Indian leverage over Kabul will help reduce Islamabad’s annoyances. Afghanistan is independent to build relations with any state as it chooses but these shouldn’t be designed against another country. While instead of parroting the mantra of ‘do more’ time, and again, the US must not let TTP plan and carry out attacks in Pakistan from beyond the border.

In return, Pakistan must also answer Afghanistan’s concerns and should leave no stone unturned in bringing Afghan Taliban to negotiating table. Key steps should be taken to make the ongoing dialogues successful. The air of mistrust is the main hindrance to peace which can be cleared only by genuine reciprocity from all sides.

The writer can be reached at SirajShawa@gmail.com and tweets at @SrjShawa