Trump turns on the heat

In most parts of the world, the head of the state might think twice, or even reject the idea altogether, about appointing a person having little regard and respect for international law as his National Security Advisor

The President of the United States of America appears, by all estimates, to be on a roll. He means what he says, and he says what he thinks. And, unfortunately, what he thinks is where the problem lies. He categorically stated during his presidential campaign that he’d be belligerent and bellicose. He vowed for a hawkish American foreign policy. He didn’t trick anyone. The entire world (including the American voters) has tricked itself.

He’s following a particular script; the script many debunked in 2016 as being too radical and extremist to be pursued by an American President. But, to the dismay of many, look where we are now.

If bringing in Mike Pompeo and Gina Haspel, as the US Secretary of State and Director Central Intelligence Agency (CIA), respectively, didn’t set the panic alarms ringing, then the appointment of John Bolton as the National Security Adviser, somehow, sums up where Trump might be heading. Interestingly, Mr Bolton is no stranger to imposing war on a country out of nowhere. When President George W Bush took that disastrous call on 20 March 2003, Bolton was the Under Secretary of State for Arms Control and International Security Affairs. Also, the fact that he pressed Bush to make the move, and, as a result, show the country’s military prowess to the world is no secret either. 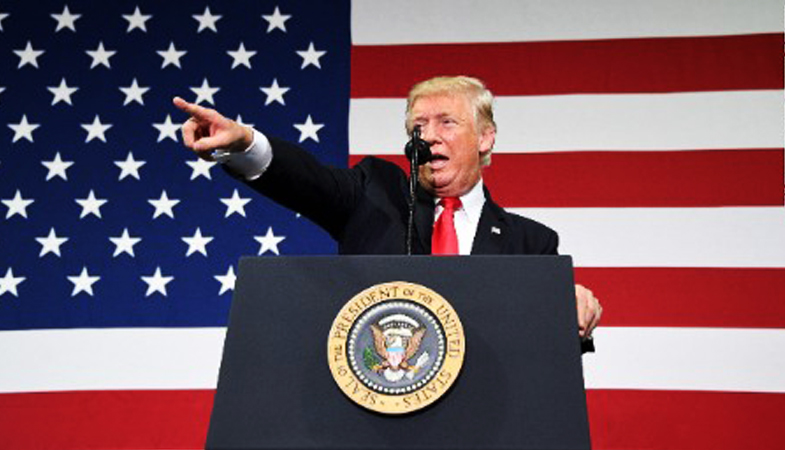 What Bolton needs to consider is that it wasn’t just a disastrous military manoeuvre, but an event that served as a breeding ground to thrive for the likes of Abu Musab al Zarqawi and Abu Bakr al Baghdadi. But the question people need to ask now is: can John Bolton, potentially, lead the United States into a war? The answer, unfortunately, is YES. Here’s why.

In most parts of the world, the head of the state might think twice, or even reject the idea altogether, about appointing a person having little regard and respect for international law as the NSA. But, Trump is Trump for no meagre reasons. Bolton — also the US Ambassador to the United Nations during 2005-2006 — once famously stated: “It is a big mistake for us to grant any validity to international law.” If he’s to advise President Trump on national security affairs, then don’t be surprised if sanity eludes the US decision-making in the days to come.

Bolton argued last month that the US should launch a ‘pre-emptive’ strike against North Korea. The threat, as per his estimation, is imminent. After Trump made the noteworthy, and praiseworthy too, the decision of accepting North Korea’s invitation to dialogue, Bolton criticised the move saying the talks will be meaningless and worthless.

Also, Trump’s NSA is not only a staunch opponent of the Iran nuclear deal but has also proposed to bomb the country, instead. ‘The United States needs to bomb Iran in order to prevent it from going nuclear,’ Bolton insisted. Not the most articulate of assessments by a former US ambassador to the UN.

If bringing in Mike Pompeo and Gina Haspel, as the US Secretary of State and Director CIA, respectively, didn’t set the panic alarms ringing, then the appointment of John Bolton as the National Security Adviser, somehow, sums up where Trump might be heading

What is likely to exacerbate the present turmoil in the Middle East is Bolton’s opposition to the two-state solution and apparent anti-Muslim bias. With Trump, reportedly, going to withdraw from the Joint Comprehensive Plan of Action (JCPOA), or the ‘Iran deal’ as its commonly referred to, before the May 12 deadline, and the US embassy relocation to Jerusalem scheduled for May, adding Bolton into the equation is only going to make matters worse.

And the hawk seems to have hawkish ideas for Pakistan too.  In The Danger of a Jihadist Pakistan, an article Bolton penned last August, Trump’s new NSA opined that Pakistan has helped flourish not only the Haqqani Network and the Afghan Taliban, but the ISIS as well. Last year, Bolton compared Pakistan with Iran and North Korea. He tweeted: “Pakistan is a nuclear power, and if it were to tip into terrorist control it would be like #North Korea or #Iran on steroids.”

For John Bolton, war is, perhaps, the solution to every international issue the US is faced with. And if there isn’t an issue to play with, doesn’t matter, Bolton has the brains enough to create one — and a long-lasting too — by going to war on the pretext of fallacious claims. As enunciated earlier, Bolton’s genius was at full display in Iraq in 2003.

Surely, Trump isn’t going to make a disastrous call. Surely, he’ll come to realise he has turned the heat on just too much. Surely, he can gauge the hefty cost of going into a war. Surely, he wouldn’t walk the talk anymore, and the latest manoeuvres are just to keep the entire world guessing. And, surely enough, Trump is ingenious enough not to get hoodwinked into escalating tensions in the Middle East, Asia-Pacific, or elsewhere. But I wouldn’t be surprised if Trump proves me wrong, anyway.