Seeking the lost workers of PTI

During the failed military coup of 2016, the president of Turkey, Recep Tayyip Erdogan, went underground to escape an arrest. He was quick to realise that his best shot to convince his countrymen that he is still in-charge is to reach out to his supporters and workers of his AKP party. Using social media, he sent a powerful message, “We will overcome this, go to the streets and give them their answer.”

What happened next was unprecedented: the Turks took over the streets to resist the usurpers. The pictures of men laying in front of the tanks to show their unconditional support for Erdogan became viral on the media. Eventually, the attempt to cease the power by the military were quashed by Erdogan’s supporters. What seemed impossible was only made possible by the trust and ideology Erdogan had instilled in his followers and supporters for two decades.

Political workers are the backbone of any political organisation. In a democratic setup, they work as a bridge between the masses and the party leadership. On the one hand, they interact with the voters to educate and communicate how the party’s policies are beneficial for them, on the other, they take the pulse of the public and provide their valuable feedback to the leadership which helps the latter form its policies and rhetoric. The role of the political worker becomes even more important during the election campaign. From soliciting votes through the door to door canvassing, organising political rallies to election day preparations, the workers are where the rubber meets the road.

In Pakistan, political parties are gearing up for the big showdown in the general elections 2018. Among these parties is Imran Khan’s Pakistan Tehreek-e-Insaf (PTI) which once again has a shot at winning the elections. Imran Khan’s charisma has earned him a huge potential volunteer base of workers. But has the party able to harness this workforce properly?

PTI is often criticised for not being able to convert its support in to vote. An absence of a trained team of volunteers working in cohesion might be the primary reason for its failure to run an effective campaign. To answer this question, we first need to understand who PTI workers are. A typical PTI worker can be described as a young, educated person coming from middle/upper-middle class in the urban regions of the country. Historically, this demographic of the society has been least active in the country’s politics apart from the 70s when Zulfikar Ali Bhutto stirred them to join his cause. If the PTI leadership wants to inspire an effective electoral movement, it is still not too late to engage its most significant asset, ie the young supporters who are gradually being side-lined.

PTI has introduced concepts which were unfamiliar to the conventional politics of the country. To begin with, the leadership promoted the importance of transparency in politics by voluntarily making public the list of their personal assets on the party website. PTI was also the first party in Pakistan to successfully use social media to rally-up support. If not for PTI, the young generation would not know the culture of organising huge political gatherings enthused with persuasive speeches and political anthems. Unfortunately, the party failed to bring forward the same exceptional ideas into building up an effective workforce of volunteers.

In a quest to identify the reasons why despite being popular among the educated class the party failed to raise a dedicated volunteer force, we can start by analysing the steps taken by the party to engage and structure its political workforce. Before the 2013 elections, the party took an initiative to organise the workers under the umbrella of Tabdeeli Razakars (change volunteers); though in hindsight, the programme was more of a publicity stunt and gave no actual plans of how to use the scores of Razakars who enrolled in the initiative. Eventually, the role of educated young people who could do way more was limited to delivering printed letters of Imran Khan through the door to door campaign.

A brave step by the PTI leadership was to introduce intra-party elections to structure the party starting from the union council level to chairman. The idea of letting the registered members of the party vote to elect their leadership was much appreciated, but its implementation proved to be a fiasco.

It seems that to bring democracy to the party the decision of conducting intra-party elections was taken in haste as certain ground realities of local relevance were ignored entirely. The timing of the polls was wrong, and it diverted the focus of the party from general election 2013 to the intra-party election.

Because the intra-party elections were a new practice, it left a rift among the local leadership of the party as the ones who failed to win the party elections withdrew their support in the general elections; as such it was a failure on the leadership’s end to foresee and mitigate this risk. The final nail in the coffin proved to be the execution of intra-party elections as they were marred by a faulty system, rigged membership lists and sold out election staff. In the corporate world, harsh measures are taken against the responsible for such blunders, but obviously political parties function differently. Nevertheless, the whole exercise had lasting effects on the party as fissures emerged in the top leadership which led to Justice Wajihuddin Ahmed leaving the party. 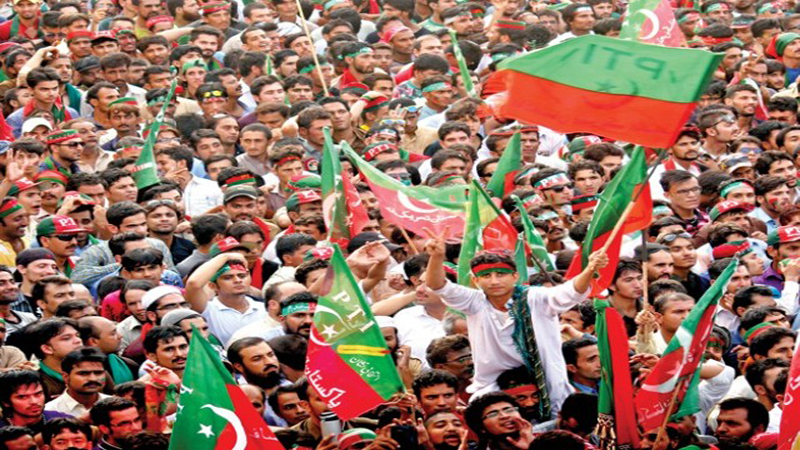 Another endeavour of the party is Insaf Professionals Forum (IPF), a platform that provides opportunities to professionals from different fields to interact, exchange and enable PTI to formulate policies. In reality, the forum has been effective only to the extent of generating lists of professionals and conducting seminars to explain the party policies through a few sessions which were not interactive. The broader objective to exchange and generate ideas from professionals could not be achieved.

In an ideal world, politics will be used as a tool for the well-being of the society. In reality, politics comprise of the activities aimed at improving someone’s status or increasing influence within an organisation, party or state. In our society, the majority of the political players put their personal gains before the country or people they represent. This is also true for political workers who are usually in politics in hopes of monetary and other favours, which their party leadership might bestow upon them if it gets into power. Political power remains strictly restricted within a few families in Pakistan.

This is an essential factor in structuring the hierarchy within conventional political parties of the country. The top leadership is almost always coming from a political dynasty enjoying huge influence and financial advantage over others. The middle-tier comprises of relatively less wealthy and influential players. Less affluent political workers survive only if they have strong patronage in upper tiers. In such a hierarchy, competition among the political workers based on their social work is least important. Instead, affluence and influence are chosen as criteria.

If one is born in the right family, he/she automatically qualifies to become the future leader of the party. The rest of the positions in the party are also awarded based on lineage, wealth and power.

Regardless of the outcome of the upcoming elections, PTI should focus on developing innovative programmes to evoke political thought at the grass roots level, thus furthering the ideals of justice, equality and freedom with the ultimate goal of bringing the lost workers to the forefront

As a party that firmly criticised nepotism in politics, PTI has reached an impasse whether to raise ideological workers to important positions within the party or to let the traditional electable to be at the helm of affairs. The recent events suggest that keeping in view the dynamics of local/rural politics, the leadership doesn’t want to ignore the traditional politicians who have joined the party, but at the same time, wants to create a charade of providing a platform to educated lower/middle class for entering the mainstream politics.

We cannot completely blame the PTI for not living up to its promise to become a party run by the young middle-class. After all, the party has to function within a corrupt political system which has deeply embedded itself in the fabric of our society. To achieve its long-term objectives, the party has to make certain compromises which don’t contradict its core principles. The option of overthrowing the existing political system and its replacement with a better system based on democratic values is not achievable in the short run.

Apparently, the leadership wants to come to terms with the existing political system as its immediate aim is the achievement of power. As a matter of fact, any party cannot implement its policies, and further it’s ideology if it fails to achieve power. The government is a weapon in the hands of the rulers to further their ideology and policies, and only if one controls this handle, it can be utilised for the enactment of one’s ideal, ie a new and better Pakistan.

Working within the confines of a political system that supports inequality of wealth and power is not the only predicament PTI faces. It’s supporters also hail from a society that has nurtured the aforementioned system of injustice, which makes them susceptible to the ailments that are normally associated with our society. PTI has been seen as a launch pad by a horde of aspiring politicians who consider themselves misfit or don’t want to be associated with older political parties.

This doesn’t necessarily mean that they are ardent followers of Imran Khan’s philosophy. These infiltrators are investing in the shape of time and money, waiting for the moment their investment will be materialised in the form of a ticket or nomination from the party.

If one thinks that they have the potential to serve the public, their self-promoting efforts within the party to be in a better position to use their potential to the fullest is not to be seen with scepticism. However, on the political stage, self-centred intentions are given away when someone is found looking for shortcuts to reach the top instead of opting the rigorous path of social work.

This leads to a feeling of jealousy among these individuals as they see each other as competition and since they are not trying to outperform their competition through social service, they end up conniving and conspiring against themselves thus contributing to the hostility that is present within the ranks of PTI for some time.

Imran Khan seems to have a knack for finding new friends like Aamir Liaqat Hussain as old friends like Fauzia Kasuri gradually distance themselves from the party. It is good to have new people coming to the party as every toolkit needs to have different tools to fix different kinds of problems. But it seems as PTI is now packing too many hammers and consequently every problem seems to be a nail.

George Orwell presented fear that the chances for the corrupt elite to be replaced by the forces that yearn change are small, but there is a greater chance that even if the successful forces which replace the corrupt elite will eventually turn corrupt themselves. Regardless of the outcome of the upcoming elections, PTI should focus on developing innovative programmes to evoke political thought at the grass root level thus furthering the ideals of justice, equality and freedom with an ultimate goal of bringing the lost workers from educated middle class to the forefront of the party.

The writer is an entrepreneur and a banker. He is also an active worker of PTI