All marital laws need a doctrine of necessity. Whether the constitution is abrogated or not is irrelevant 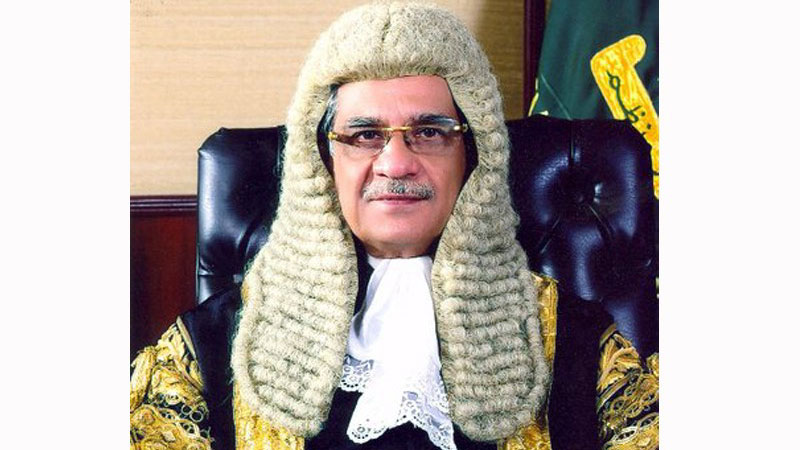 Judicial Martial law is quite unique as an idea. There isn’t any example of this phenomenon having occurred anywhere in world history. Apparently, Sheikh Rashid has demanded that the Chief Justice of Pakistan (CJP) take the country’s reigns for a period of 90 days.   This means the CJP should declare himself a dictator, and the superior courts are to stand by him. Thephrase ‘martial law’ is an extension of the dictum, “power lies in the barrel of a gun”.

Luckily for us, a judge’s pen can’t be turned into a gun. A judge’s weapons are his judgements. If the constitution is grand norm, it immediately wears the wheels of decree. Things are not that simple either. When Justice Sajjad Ali Shah was CJP, his orders as CJP were not obeyed. His fellow judges left him isolated. This clearly shows that judges can’t be dictators, unless men with guns are there to stand by them.

In the Dosso case, apart from the moral side, Justice Muneer is rightly suggesting that a successful coup is a revolution, it brings its own legal order. What we need to understand is that it is not the court which validates the coup but the judges and new legal order under which the judges take oath. When the system is dismantled, the Court an integral part of that system stands dismantled either. Doctrine of necessity is the judicial face of martial law, it gives martial law a legal cover.

In our history, all legal covers to martial laws under the doctrine of necessity are finally stamped by the Parliament by making amendments in the Constitution. The cycle of military rule is ten years long. It is interesting to see that all military rules have in one form or another had a support of the US. Particularly the coup of General Ayub Khan and of Zia ul Haq, were plotted by the CIA.

In democracies, people are sovereign. Parliament is antecedent to people. Theoretically speaking, the coup is not against the Parliament, it is against the people

In democracies, people are sovereign. Parliament is antecedent to people. The oretically speaking, the coup is not against the Parliament, it is against the people. As an institution, the Parliament is nothing if not the face of the people. The stamp of the Court on it under the doctrine of necessity is a façade. We can understand this here if we theoretically apply the doctrine of adverse possession on altogether different facts; that the Justice Muneer in Dosso case was not arguing on the moral side of the usurpation of power by the military, but the jurisprudential side. Jurisprudence answers the questions where constitutions go silent. As there is famous legal dictum, “The law assists those that are vigilant with their right, and not those that sleep thereupon’.

It is a paradox. In this complex system with complex fabric of politics, formal and informal power structure in this country, there cannot be ready made answers. Our democracy is an elitist democracy, where vote is caste by the majority and ruled by the minority.

Bureaucracy of Punjab is completely under the influence of the Mian brethren. It’s the same situation in Sindh, but with the PPP instead of the PML-N. The developmental fund is another lever that is used as an instrument in the elections, a political hook to lure the people.

However, Shiekh Rashid’s jump on the judicial martial law bandwagon as a remedy is unwarranted. Our politicians should grow. The CJP himself has categorically rejected such notions and also, he has recently said in his observation that he is not a dictator, but an impartial observer.

As an idea, judicial martial law is nothing but an extension of martial law. When the pen brings a coup, it will need the assistance of a gun. In the Constitution, sovereignty belongs to the people, but in jurisprudence, sovereignty is power.