‘Bajwa Doctrine’ not about politics: army

* Maj Gen Ghafoor says army not opposed to 18th Amendment as a whole * Holding general elections job of ECP and interim government, not army * Pakistan Army has nothing to do with any NRO * India must not underestimate Pakistan's capability to respond to any misadventure * Troops deployed in Saudi Arabia won't take part in Yemen war 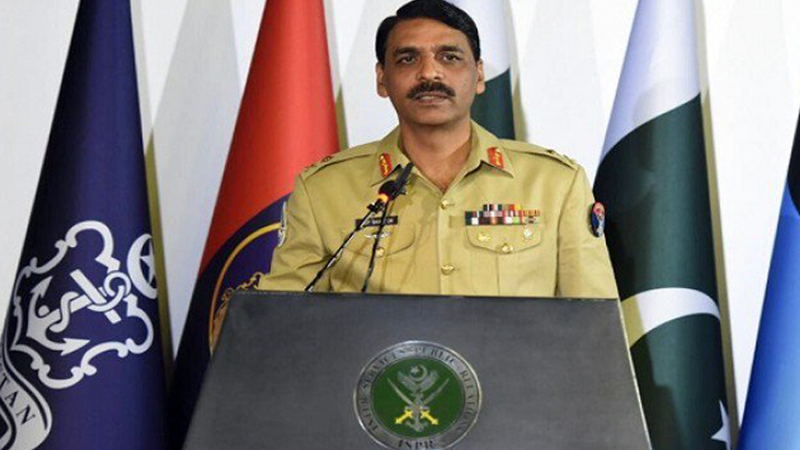 ISLAMABAD: Pakistan Army on Wednesday dismissed the notion that the so-called ‘Bajwa Doctrine’ had anything to do with the political matters of the country, especially the 18th Amendment and the judicial activism.

“If there is a Bajwa Doctrine per se, its scope is limited to the security of Pakistan,” Inter-Services Public Relations Director General Major General Asif Ghafoor told a press briefing at the ISPR Headquarters. “The basis of this doctrine is to make Pakistan a peaceful, stable and progressive country as it was before 9/11 when there was no suicide bombing and terrorism. This is the dream of General Bajwa … just like it is the dream of every Pakistani whether he is a civilian or a person in uniform … a politician in government or in opposition … a worker of a government department or a private entity,” he clarified, in an effort to put to rest the controversy stirred especially after an off-the-record meeting between a group of journalists and the chief of army staff at the GHQ a few days back.

“We need to see the doctrine through the security lens only … it supports identification and elimination of terrorists from Pakistan, de-weaponisation of the country and the establishment of peace on the borders. It is just is a vision to lead Pakistan towards peace,” the ISPR chief said. “There is no mention of 18th Amendment or judiciary in the Bajwa Doctrine if it exists at all,” he said, adding that unfortunately all the matters discussed during the meeting between some journalists and the COAS were lumped together by some quarters as the ‘Bajwa Doctrine’. “The army chief addressed the same issues in the meeting as I discuss with you in my every press conference,” he said.

Regarding Gen Bajwa’s reported opposition to the 18th Amendment, the ISPR chief clarified that Pakistan Army never opposed the 18th Amendment as a concept, but simply wants to ensure that the provinces are capable of making the decisions. “Army chief never said that 18th Amendment is not good as a whole. In fact, it brought in some very good idea, mainly the delegation of powers to the provinces. There is nothing better than every province being responsible for its own matters, but they should also be capable of making those decisions,” the ISPR chief said, adding that amendments are the beauty of an evolving system. “Things change with the passage of time … new challenges come up, which necessitate amendments to the existing system of governance. This is the practice all over the world. Had the original document been complete in all senses, there was no need to bring amendments to the constitution.”

To a question that Gen Bajwa had reportedly hinted at possibility of some delay in the holding of general elections in a recent meeting with the journalists, the ISPR chief clarified that Pakistan Army had nothing to do with the schedule of the general elections.

“Announcing general elections is not job of the army. Election Commission of Pakistan announces [the elections] after the tenure of the sitting government is over, while the interim government is responsible for holding the elections within a stipulated time period,” Maj Gen Ghafoor said. “In the context of general elections, Pakistan Army will only act in aid of civil power if required by the interim government and the ECP within the constitutional framework,” he added. “We are as good a citizen as you when it comes to the timeframe of holding the elections,” he concluded.

To a question about any NRO in the making in the wake of Punjab Chief Minister Shehbaz Sharif’s reported back-to-back meetings with Gen Bajwa followed by Prime Minister Shahid Khaqan Abbasi’s surprise one-on-one meeting with Chief Justice Mian Saqib Nisar, the ISPR chief clarified that Pakistan Army had nothing to do with any NRO. “Please understand that 2018 is the election year and there will be lot of speculations in this period … this rumour should also be seen in that light,” he said.

On Punjab chief minister’s reported meetings with the COAS, Maj Gen Ghafoor said that no such meetings happened in that period. “However, as state functionaries, both can meet any time and might have already met several times to discuss matters of national interest. There is no need for them to meet in secret,” he said. “When the COAS proposed the fencing of border with Afghanistan, Shehbaz called Gen Bajwa and offered monetary assistance on behalf of Punjab. Meetings and calls between an army chief and chief ministers are nothing extraordinary,” he added.

The ISPR chief lauded the sacrifices rendered by country’s security forces and the intelligence agencies in dealing with the terrorist elements and improving the law and order situation. Highlighting the success of the ongoing operation Raddul Fassad, he said since its launch in February 2017, the operation has destroyed 26 terrorist networks in the country. “Some 23,380 intelligence-based operations (IBOs) have been conducted in which 23,964 weapons have been seized,” he said.

The ISPR chief said at present law and order situation in Karachi was very different from that in 2013. “There were 70 no-go areas in Karachi, but as of today there is none. No concept of shutter-down strikes there,” he said.

“In year 2017, around 386 political activities took place in Karachi but not a single incident of violence was reported. Hotel occupancy is back to 100 per cent. Karachi Stock Exchange is going up. Social events are being held without any fear,” he said. “However, this doesn’t mean that the job is done … there is still a lot more to be done in Karachi,” he added.

Maj Gen Ghafoor said that the world should look at the China-Pakistan Economic Corridor (CPEC) from the economic perspective rather than the political lens. “CPEC is an initiative that will benefit the entire region … not only Pakistan and China. It will bring prosperity to the entire region,” he said. “If India sees it as a threat, it will negatively affect even them. However, we are going ahead with it come what may,” he added.

He said that the PTM started in relation with the extrajudicial killing of Naqeebullah Mehsud, the issue which is being looked over by the country’s top court now. “Later on, new dimensions popped up and the PTM started to receive a lot of sympathy from Afghanistan,” he said, adding that he and the prime minister have separately met PTM leader Manzoor Pashteen.

On Naqeebullah’s murder, Gen Ghafoor said, “No responsible Pakistani can justify the extra-judicial killing of Naqeebullah Mehsud. Like everyone, we also want an investigation to be conducted into the murder and those responsible to be dealt with according to the law,” he added.

Talking about the successful holding of the third edition of Pakistan Super League in Lahore and Karachi, Maj Gen Ghafoor said it was an indicator of the improved security situation in the country. “Last week has been very eventful in Pakistan. Three PSL matches and March 23 parade were held. All went well and the good thing was that the people participated with great passion in these events,” he said. “This is a proud moment for public, security organisations and intelligence agencies,” he added.

On ceasefire violations along the Line of Control and the Working Boundary, Maj Gen Asif Ghafoor said India was behaving like an irresponsible state. He said Pakistan had always played a positive role for peace in the region, adding that efforts to promote instability in Pakistan would also not go in India’s favour. He warned that Pakistan’s capability to respond to any misadventure should not be underestimated. “India shouldn’t support instability in Pakistan through Afghanistan or through violations on the Line of Control and the Working Boundary as instability in our country is not in their own interest,” he said.

To a question regarding any plans to increase the strength of land forces in light of a perception of an impending conflict being created across the eastern border, the DG ISPR responded, “Please don’t underestimate Pakistan’s capability to respond to India. Our armed forces are always response ready. You must trust your forces and rest assured that nothing is lacking in our response [preparedness] to India.”

Regarding extending an invitation to the Indian envoy on Pakistan Day parade, he said the move “reflects our diplomatic norms.” “We are a responsible country and we invited them to let them know how resilient as a nation we are,” he added.

To a question, Maj Gen Ghafoor said Pakistan enjoyed close ties with Saudi Arabia and the United Arab Emirates (UAE). He said the army chief had recently visited Saudi Arabia. He said Pakistan signed a pact with Saudi Arabia in 1982 under which Pakistani troops are sent to the country on training and advisory mission. “The recent announcement of deployment of Pakistani troops to Saudi Arabia is under the same agreement. They are not being sent to fight war against Yemen. Nor they have anything to do with the Islamic Military Counter-Terrorism Coalition,” he said.