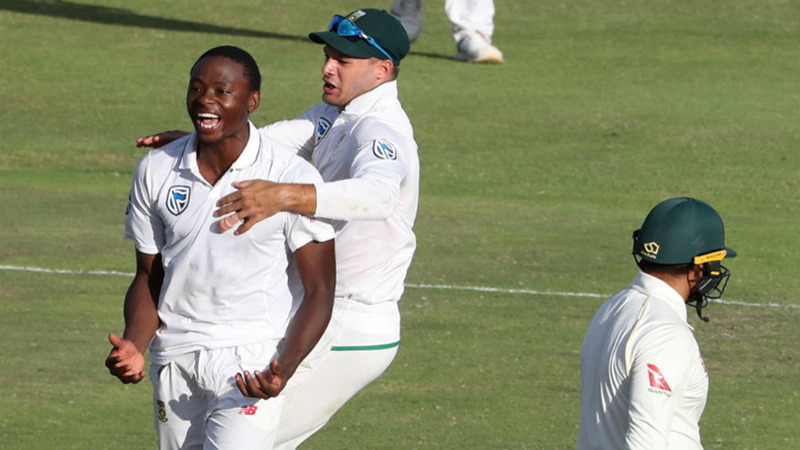 CAPE TOWN: The focus will switch back to cricket as South Africa and Australia clash in the third Test on Thursday, with the world’s number one bowler Kagiso Rabada handed a reprieve to bolster the home side in a pivotal moment in the tempestuous series. With the four-game series poised at 1-1, Rabada’s availability after he overturned a suspension is a huge boost for the hosts on what is expected to be a lively Newlands wicket similar to the surface used for the test against India in January which lasted only nine sessions. That pitch was praised by both sides for setting up a good sporting contest as South Africa claimed a 72-run win, though it heavily favoured the seam bowlers.

“The groundsman says wicket will be the same as for the last one, so we expect both teams to go hard at each other on the field,” South Africa coach Ottis Gibson told reporters on Wednesday. “The way the series has been played, there has been a lot of really good cricket.” Rabada’s availability is key to South Africa’s chances as he has 15 wickets at an average of 16.80 in the series, comfortably the most effective bowler on either side. “We are very happy he is allowed to play, we all believe it is the right decision at the end of the day,” Gibson added. “We have made him aware of responsibilities for the team, he is a very important player.”

Gibson was less sure of the final make-up of his side, whether they stick with an extra batsman and if middle-order batsman Theunis de Bruyn retains his place or makes way for Temba Bavuma who is fit after a finger injury. “We are still putting together the final XI at this stage, we don’t know where we will try to make a change. We are trying to win a series, we will select a team to do that,” Gibson said.

All-rounder Mitchell Marsh (groin) and fast bowler Mitchell Starc (calf) have shrugged off injury concerns to be available as Australia also ponder changes having followed a comprehensive 118-run victory in the first test with a six-wicket defeat in the second. Spinner Nathan Lyon says they have assessed their shortcomings and he expects an improved showing. “We sat down and had a good debrief. If I am honest I thought we played at about 40 percent in PE. Another 100 runs and it would have been a helluva Test match,” Lyon said. “We will have a team meeting to sit and discuss where we can better. The pitch is interesting, it looks a pretty good wicket. “It’s a helluva series with two top teams going at it.”