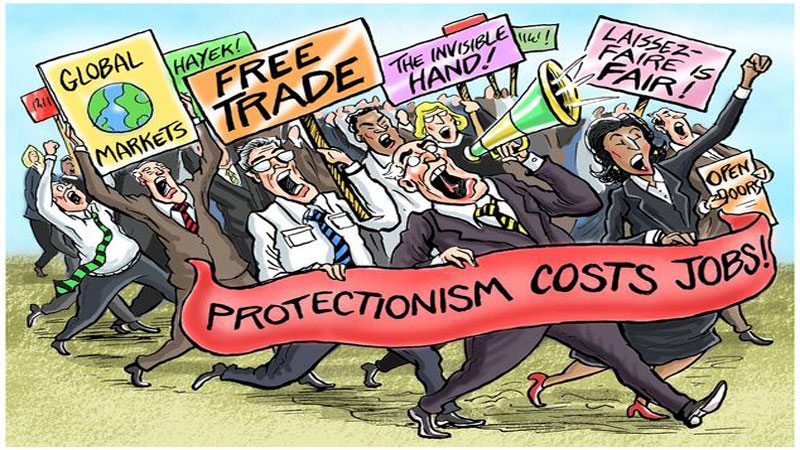 America, can we talk? We need to talk about “free trade.” We’ve needed to have this conversation for a while, actually. Like, since the 1980s.

For the past several decades, the U.S. political establishment has advocated free trade as part of a broader economic ideology called neoliberalism.

Now, you may need to ignore the word “liberal” in there – its meaning here is different from how most people use it in our politics.

Neoliberalism is not a Democratic idea. Ronald Reagan was a huge champion of it. In more recent decades, all of our presidents from both major political parties were on board with it – until, to some extent, Trump.

The simple way to understand neoliberalism is that it’s the package of economic and trade policies the U.S. has lived under since the Reagan administration. Deregulation. Privatization. That sort of thing.

One pillar of neoliberal ideology is free trade. In business school, I was taught not to question it. The idea was that if countries removed trade tariffs, then everyone would benefit.

Each country would produce what it’s most “efficient” at producing: Developing nations will manufacture goods with cheap labor. The U.S. will grow lots of corn and soybeans and export them. And everyone wins because there will be low prices.

The counter arguments are often humanitarian and environmental. If we’re going to buy clothing and iPhones from nations with cheap labor, lax environmental laws, and few labor rights, then the people who make the goods we buy will work in unsafe and inhumane conditions.

For example, in 2013, a building housing garment factories in Bangladesh collapsed, killing 1,134 people and injuring thousands more. Cracks had appeared in the building before it collapsed, and an engineer declared it unsafe. Factory owners ordered their workers back to work – and then the building collapsed.

The workers were producing clothes for export, including top U.S. brands. But, on the upside (say the neoliberals), clothing made in Bangladesh is nice and cheap in the United States.

Also, corporations get massive profits. You can make more money when you can pay workers only $3 a day. Free trade may help our consumers and corporate CEOs – but it hurts workers. In the book Threads, Jane Collins details how the garment industry changed after some companies began sending jobs overseas.

Workers in the U.S. became limited in how much they could push for higher wages. They knew that if they pushed too hard, their employer would fire them all and move the factory to Mexico, Vietnam, or Bangladesh.

Furthermore, an American company that wanted to pay its workers well was limited in its ability to do so, because it was competing with other companies that paid less for labor overseas.