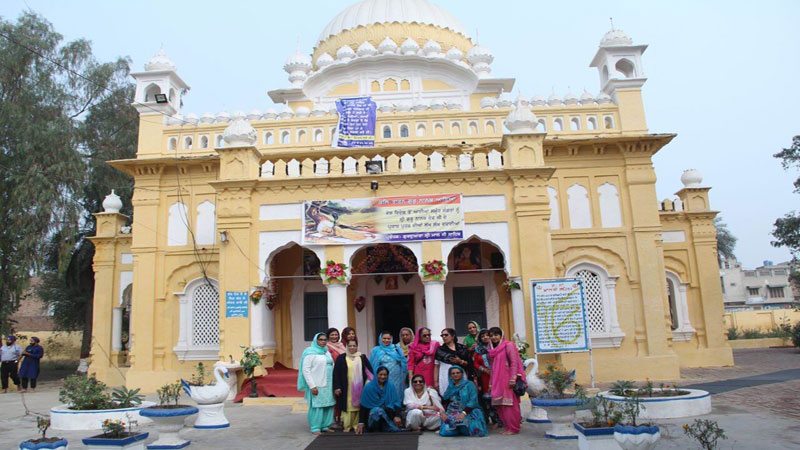 The fort was originally built in the 11th century but it was rebuilt by a Mughal emperor in the 16th century and was later on used by Maharaja Ranjit Singh as his residence.

Maharaja Ranjit Singh, the only son of soil to rule Punjab, was a secular ruler who happened to be a Sikh.

He added and modified new fortification wall to the fort. There are two main gates to enter: Akbari Gate and Alamgiri Gate. The other structures within fort which fascinated me are the Shish Mahal and garden leading to Shish Mahal. The entire place is sheer beauty and reflects the Mughal architect of 15th and 16th century.

At the fort museum, we were warmly greeted by Mr Anjum Dara and he personally offered to take us through the Sikh Gallery which is housed in Maharani Jindan’s haveli. Maharani Jindan was the mother of Maharaja Dilip Singh. All the items on display are from the personal collection of Princess Bamba who is buried in Lahore which made them even more special. A replica of Maharaja Ranjit Singh’s horse with original saddle and accessories can be seen at the museum. These are alongside a variety of swords, guns, cannons and armory from Maharaja’s time. It is said that he was fond of guns and liked to get any new guns/rifles replicated. Some of these items are actually made in Royal foundry established by Maharaja when he was alive.

This grand mosque is situated opposite to Lahore Fort and was built in 1673. The mosque looks like a smaller version of Jama Masjid in Delhi built in 1643, but it appears to be much better cared for at the moment. I was surprised and interested to learn at any time just over 100,000 people could pray together. The stone carving and marble work is still in pristine condition and is a

visual representation of the importance of Mughal Empire and 16th and 17th century.

I was a little uneasy and decided to challenge our guide when he said that during Maharaja Ranjit Singh’s time the mosque was used as stable. There is no evidence of this in fact Maharaja, who was known for his secular credential, used to donate money from the treasury for the upkeep of all holy places regardless of the religion.

This is the place where fifth Guru of Sikh faith Arjan Dev Ji was martyred under direct instructions from the Mughal emperor Jahangir. Local Sufi saint Mia Mir offered to intervene on behalf of Guruji but was forbidden to interfere in act of God. It is said

back. There is a platform built where Guruji was tortured and later a Gurudwara was initially built by Guru Hargobind Ji.

Zama cannon, also known as Bhangiawala Topah, is situated just outside the museum. The Gun was built in Lahore during Durrani empire and got into the hands of Bhangi Chiefs. When Maharaja Ranjit Singh defeated Chet Singh Bhangi it came into his possession.

The Gandhara, Hindu Jain and Sikh gallery are of particular of interest. Some of the collection from the Sikh era are on display courtesy of Mr Saifiddin Faqeer. There is a vast collection of statues, sculptures and items made out of a variety of materials. These included ivory, wood and stone.

There is number of miniature paintings depicting the Hindu and Muslim time period. There is handwritten Holy Quran presented by Maharaja Ranjit Singh to his minister Mr Fakir Azizuddin.In the Sikh gallery, there are intriguing charts such as the Genealogy of Maharaja Ranjit Singh and artefacts from Maharaja

It contains a Palki Sahib, portrait of prince Dilip Singh and a Holy Guru Grant Sahib. To add to this large and informative collection there are small paintings of Sikh Gurus followed by a chart showing the timeline of Sikh Gurus. There is collection Faqir Syed Nur ud Din which contains items such as beads and an original gate from Wall city was being installed at the time of my visit.

An evening with Najam Sethi

Pakistan Cricket Board (PCB) Chairman Najam Sethi and his wife Jugnu Mohsin who is the editor of Weekly The Friday Times were our hosts. We were warmly welcomed at the Books n Beans Cafe where a clique of stand-up comedian girls held a performance. We had steady stream of laughter. The girls were very talented. It was great to see that Jugnu Mohsin is promoting handicrafts and handmade cotton of the village women of her native town.

My visit to Pakistan was a memorable one and it is encouraging to see that the government is taking steps to preserve historical and religious places. One needs more time to grasp the history of Taxila which spans over 2500 year

Maharaja Ranjit Singh was the only son of soil who ruled such a vast land of Punjab. I would like to mention that Sutluj Treaty signed between East India Company and Maharaja Ranjit Singh was drafted by Fakir Azizuddin.The treaty is still referred by diplomats and historian alike around the world. FS Aijazuddin certainly has the humility, wisdom and diplomacy of his ancestors.

We invited Aijazuddin to give a lecture on ‘Maharaja Ranjit Singh – The Rise & Fall of a Secular Empire’ in September 2016 in London. Entering the sitting area in their home you cannot miss the glorious statue of Hindu Lord Ganesha, which we were told he got from Aitchison College. The house is modestly and tastefully decorated. It has a large collection of rare books and the finest painting drawn by their son depicting him with his father.

We dined on a scrumptious dinner which was prepared at home with special care taken for pure vegetarians. Over the dinner table Aijaz narrated an interesting anecdote which became the perfect metaphor for the partition. It is about David Blunkett, former British home minister, on his official visit who crossed over from Wagha Border to Lahore.

As he crossed the border to Pakistan, the secretary noticed Mr Blunkett’s suit was left in the car on the other side. Aijaz managed to call the Indian guards and was given the suit carrier. He was surprised to notice the trousers still remained in their Indian car. There was much commotion as the guard had to be called once again to retrieve his belongings from India and hand them over to Pakistan. It must have appeared trivial, so much kerfuffle over the little distance of the border however Aijazuddin said to David Blunkett “Sir this is what partition is to us- shirts are here , trousers on other side!” 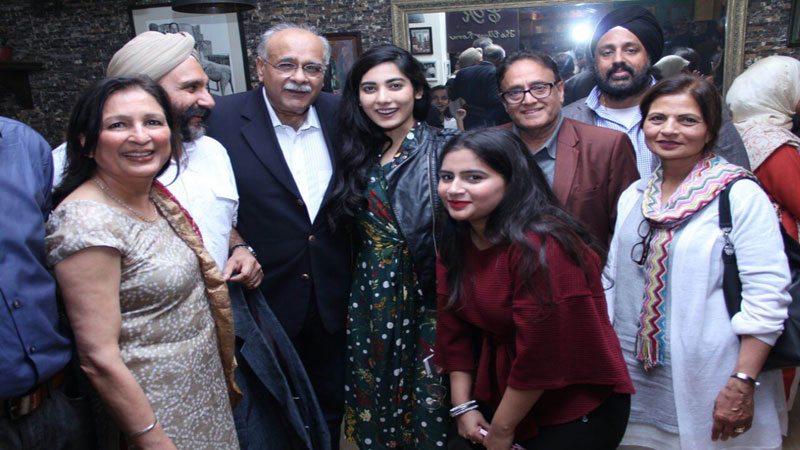 My visit to Pakistan was a memorable one and it is encouraging to see that the government is taking steps to preserve historical and religious places. One needs more time to grasp the history of Taxila which spans over 2500 years. It is

definitely not a day trip from Islamabad. We had the idea that the Punjab Tourism Department could develop hotels and washroom facilities in the areas away from main cities while the extra entry fee being charged can be ring fenced to provide this. It would be great to see efficient use of the Gurudwara facilities for local schools.

For instance, Sarovars can be used for people teaching how to swim, Langar halls can be used as indoor stadium by local schools and guest rooms can be used by delegates who come for a weekend seminar. It is in the spirit of Sikhism to share what we have with anyone who would enjoy them. The doors of Gurudwara and what it has to offer are open to all regardless of gender, race and colour. I think efforts are to be made to provide clean washrooms close to key places of interest this will only help the number of tourists that visit and in turn the Pakistan economy. I know any government struggles to find money for such things but encouraging local businesses to develop services where tourists and locals can alike can enjoy a cup of hot chai will aid everyone in many different ways.

I personally think Pakistan State Oil (PSO) petrol pumps are ideally suited to provide help for such things as they have means to do it. Many people are apprehensive of the Chinese potential to invest in Pakistan and the authorities are well advised to be cautious of this. Finally providing Elite Force/local Police escort, is an excellent idea and tourist do feel safe and protected.Pakistan has an extraordinary history. It is a land where saints were born, houses areas of rich heritage and contains glorious moments of the past. The place rises like a phoenix when faced with adversity as seen in past 3500 years, and I am sure it will rise to further heights in future.

The writer is a chemical engineer and an industrialist based in London. He loves traveling and exploring historical places