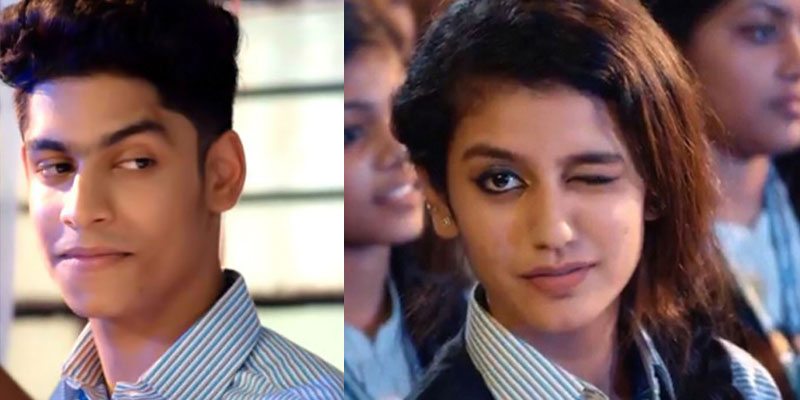 LAHORE: In a shocking development, the entire cast including the ‘wink girl’ Priya Prakash Varrier and Muslim co-stars like Roshan Abdul Rahoof as well as the production team headed by Muslim director Omar Lulu have been sentenced to death under Pakistan’s blasphemy laws.

In proceedings held here in an Anti-Terrorism Court (ATC) in Lahore, everyone behind the said film was prosecuted by the state after country’s spiritual leaders Molvi Khadim Peervi and Hakim Saeed jointly moved the court.

The film in question featured a Malayalam folk song ‘Manikya Malayara Poovi’ which the spiritual leaders said was extremely blasphemous.

Unfortunately none of the defendants could stand trial because the greatest enemy of Islamic fort that is Pakistan refused to hand over the suspects to Pakistan. This is why the court held the trial-in-absentia. The defendants were given public defenders as lawyers but they refused to represent the defendants saying their conscience and love for Islam didn’t allow them to represent blasphemers.

“Alhumdulillah, justice has been served today,” the special prosecutor said. “We have sent a strong message to the world that Pakistan is a fort of Islam and we can rule against anyone who commits blasphemy no matter where they are in the world.

The Federal Investigation Agency (FIA) special investigator said it’s unfortunate the ‘arch-enemy’ of Islam, India didn’t hand over the over 100-member cast and crew of the film. He added that he would have made the defendants sodomise their siblings and then each other during the investigation to prove how much he loved his faith.

“Who cares if the world calls me a pervert with deeply repressed sexuality,” he said. “This blasphemous world has come up with these new terminologies such as pervert and creep.” The special investigator said he wasn’t being a pervert for his own sake but for the sake of punishing the blasphemers.

When this reporter asked them about the fact that the song in question was written and composed by the Muslims and that the Muslims of Indian state Kerala have been singing this for some 40 years, the spokesperson for all parties-led grand alliance against the film, Imam Khan said that they would move the parliament against this and after a grand debate the Muslims of Kerala would be declared non-Muslims.

“There’s no such thing as a progressive Muslim,” he said. “If you want to be progressive, you should be an atheist”. He added that for this reason the progressive Indian state Kerala would be declared non-Muslim by the house.

When asked, the spokesperson of the grand alliance said since Pakistan is the fort of Islam, every Muslim in the world should take its rulings and decisions as binding. He said it would be unfortunate if India didn’t implement the decisions of Pakistani parliament and it could trigger a nuclear war.

Imam Khan insisted he is the real liberal person and the ones who have gone into hiding were fake liberals. He further said that Oru Adaar Love film is a grand conspiracy against Islam just like the PML-N led committee amending electoral reforms bill was going to change the anti-Ahmadiyya declaration to appease foreign masters.

Meanwhile, Imam Khan’s ally for the upcoming elections, Tavilul Qadri was seen chanting ‘peace’ on a French television network while later that evening, he was seen taking credit for the blasphemy laws of Pakistan in an interview to a Pakistani network.

Dissident politician Chaudhry Jan-Nisar praised the trial and conviction of the blasphemers but disagreed on the implementation of the death penalty in absentia. He said the grand alliance’s plan was detrimental to country’s progress, adding that the country should only execute-in-absentia the convicts after taking United Nations (UN) in confidence.

The execution of the convicted people will be carried out also in absentia on Eid day – the day the film is being released. “It will be a symbolic execution,” the Attorney General said. “This will send a loud and clear message to the whole world”.

A Punjab Assembly lawmaker, meanwhile, submitted a resolution to carry the death penalty by stoning-in-absentia. A Senate Committee is also working on finding the possibility of publicly hanging-in-absentia the convicts.

* if this wasn’t utterly clear, it is a satirical piece