The menace of drugs

Worryingly, drug trafficking once viewed mainly as a social and criminal problem has transformed in recent years into a major threat to the health and security of the people

According to the United Nations Office on Drugs and Crime, Pakistan has 6.7 million drug users. More than four million of these are addicts, amongst the highest number for any country in the world. Abuse of cannabis and heroin is rife in the country, and the drugs are extremely cheap and easily available. Most of the drugs come from Afghanistan, the country that is responsible for at least 75 percent of the world’s heroin. UNODC calculates that more than 800,000 Pakistanis aged between 15 and 64 use heroin regularly. It is also estimated that up to 44 tons of processed heroin is consumed annually in Pakistan.

The number of cannabis users is particularly high in the Khyber Pakhtunkhwa province of Pakistan, which neighbours Afghanistan, where close to 11 percent of the population is hooked on drugs (mainly cannabis). In 2013, the number of drug users in Balochistan was 280,000. In Punjab and Sindh, heroin and opium users are significantly higher than other parts of the country. The use of heroin and opium is widespread in rural areas of Punjab and Sindh.

The number of injection drug users in Punjab has also increased sharply in the recent years. In 2007, Pakistan had an estimated 90,000 injecting drug users, but the number had risen to around 500,000 by 2014. An increase in HIV positivity has also accompanied this increase. According to the research, in 2005, about 11 percent of Pakistani drug users were HIV positive. That number rose to 40 percent in 2011.

Because alcohol is not allowed in Islam, many addicts find ways of justifying drugs, believing that it is a religiously and socially acceptable act. Islam forbids not just alcohol, but also intoxicants, which go side by side with gambling. However, because the destruction that comes about when a poor man or woman use up their daily savings on drugs does not cause any major damage other than to themselves, it is deemed a less important issue to worry about than others. 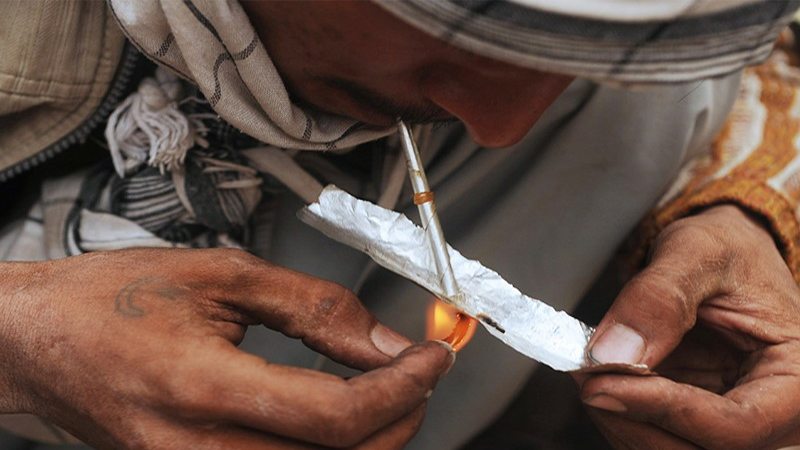 The drug addiction is prevalent in spades even in the elite class. One cannot tell whether it is surprising or not that college and university students use freely doing drugs everyday. In fact, the security guards, janitorial staff, and even faculty members use drugs, inside and outside school premises. Instead of disciplining students, they become allies with them in the act. Drug usage has become such second nature to so many folks in Pakistan that even an educational institution does not see it as a weakness in the individual, institution or the system.

Young people are more susceptible to drug use. They often talk about the ‘highs’ but may not be aware of the many ‘lows’.

The majority of drug addicts usually start with soft drugs like chhaliya, gutka or paan, and then move to hard drugs like heroin, opium and cocaine, etc. The purchase of drugs or alcohol by young people is usually through dealers or ‘agents’, who are just a phone call away. Their numbers are easily exchanged from one person to another. The contact numbers are also widely distributed throughout hostels, hotels and other places that are generally hidden from the eyes of law enforcing agencies.

The drug abuse is often linked to factors such as risk-taking behaviour that may involve experimenting with narcotics,to fight social isolation, stress, anxiety, depression, peer pressure, modern lifestyle, unemployment, a lack of supervision and attention from parents, the desire for social acceptance,  weak religious beliefs, easy access to drugs at low prices, to heighten sexual pleasure, to overcome frustration and or tragedies.

It is important to know that no one should be stigmatised against because of his dependence on drugs. Law enforcement agencies must treat drug users as victims rather than criminals. Drug dependence is a disease, not a crime. The real criminals are the drug traffickers. Awareness campaigns through mass media, essay contests, lectures and declamation contest in schools, colleges and universities should be run to create awareness about the ill effects of drug addiction. Public awareness campaigns are needed to be run every day on television and radio. All television channels should devote 0.5 percent of airtime to raise awareness on the devastations of drug addiction. More recreational facilities should be created to take the youth off the drugs. Parents should be vigilant and should keep their children busy in healthy and productive activities.

The writer is a freelance journalist and is associated with the development sector. He can be reached at mqesar@gmail.com. He tweets @mqesar