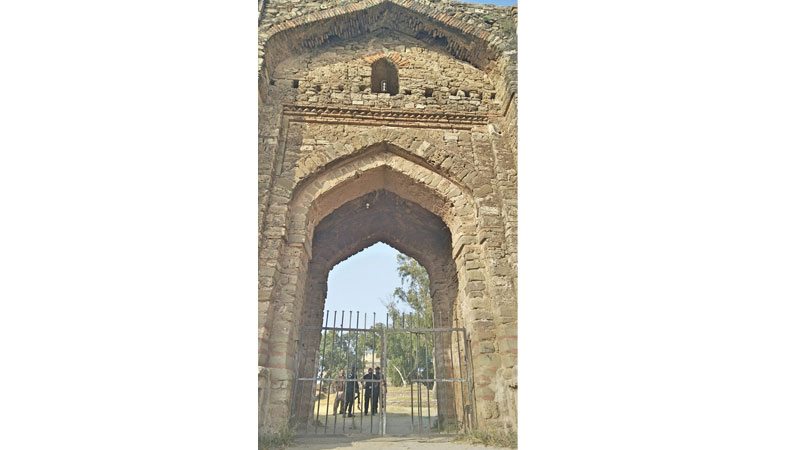 The next day, we were ready to see historical heritage sites in Rawalpindi and the surrounding areas of Islamabad. Our plan totally disturbed when the driver told us that main Islamabad Express Highway was blocked at Faizabad flyover due to sit-in of a religious group. We mired for hours in rush and our time was wasted in traffic jam. Then we altered our route. We were on main GT road and after many hours of stress caused by the sit-in, we reached a splendid Mughal era architecture, Rawat Fortress.

This fort derives its name from an Arabic word Rabaat which means Inn. It was built in the 16th Century by a Gakhar King Sultan Sarang Khan to defend Pothohar region from Sher Shah Suri. The ruins of the tomb of Sarang Khan and his 16 sons (who died fighting Sher Shah Suri) can be visited. Although it is a little run down now, the magnificent planning and architecture still shine through, it is home to a large courtyard and number of rooms all arranged beautifully. The fortress is currently being used by local children as a cricket ground allowing new generations of people to soak in the history of the fort. After Rawat fortress, we moved to Mankiala Stupa which is hardly 3 kilometres away from the fortress.Mankiala Stupa is away from main GT road, but its mighty architecture nestled in fields makes it visible from far away.

Stupas are the hemispherical structure where important Buddhist monks, nuns and kings would meditate. They are eventually buried there too. It was built in the 2nd century during kanishka period. According to local tales, Manikala Stupa was built in memory of a Buddhist monk who fed parts of his body to hungry cubs. The Stupa is well protected with boundary wall and padlocks and contains overgrown grass and an area used by locals to play volleyball. It has the natural beauty that can be seen by all. However, we all agreed it could be enhanced by the further upkeep of the grounds.

After Mankiala we headed towards historical village of Pothohar, Sagri. The village has rich Sikh and Hindu heritage in the form of old banyan trees,ponds, havelis, temples and Gurdawaras.

Prior to partition in 1947, there was a sizable Hindu Sikh Community here and we were able to visit a disused and dilapidated Gurudawara. The grand marble tiles and remainder of the structure was a powerful reminder of the wealthy community. We also visited a private school that is well managed by a lady. She charges a nominal fee of Rs 700 per month per students compared to Rs. 3000-4000 charged by other similar English owners. The classrooms were well stocked with equipment, all the signs were in English and the lady was kind enough to let our group use the school facilities when needed.

Local tales say Manikala Stupa was built in memory of a Buddhist monk who fed parts of his body to hungry cubs. The Stupa is well protected with boundary wall and padlocks and contains overgrown grass and an area used by locals to play volleyball

After Sagri, we were on main road that connects Rawalpindi to Kashmir. After 30 minutes of drive, we were in Kallar Syedan where opulent Sikh place of 19th century was situated. A local politician greeted us with amrassas (local traditional sweet).

Sir Baba Khem Singh Bedi was 14th descendant of Guru Nanak Dev Ji and is widely credited with reviving Sikhism in Punjab. After the second Anglo-Sikh war, Sikhs were hunted down and outlawed to carry any weapons. The estimate varies but there were no more than few thousand Sikhs left who mostly were in hiding deep in forest and hills. Sir Baba Khem Singh started visiting small villages and encouraged people to become Sikhs, with his persuasion masses were baptised. He was instrumental in recruiting Sikhs into Indian Army (during British Raj, it was known as Indian Army and not British Army). His charm, manners and saintly approach won him not only into the minds of millions of Punjabis but also their hearts. Many were attracted to the message he was portraying and consequentially converted to Sikhism. He founded several Khalsa schools in the Pothohar region which are still in use albeit not under the same name. The palace worked as a fort for many Hindu and Sikh people during the 1947 anti-Hindu and Sikh riots, luckily there was no loss of life in the area. The inside of the palace is covered with beautiful frescoes, murals and magnificent carvings. It was a reminder to us all of the rich heritage of the bygone era and workmanship of artisans. A variety of Hindu gods, warriors and Sikh Gurus can be viewed on the walls of the palace. As you wander around, you will remember stories from Indian mythology.

Master Karamat Hassan who studied and later taught in the school, told us the palace was converted into a school but when the building was rendered unstable they moved out to a purpose-built school within the palace complex. It is a shame however that the ETPB would not give the lease to such schools and bodies to maintain such historical buildings. We were given a warm welcome by all students and staff.

The original Nishan Sahib (a pole carrying a Sikh flag and on the top two-edged sword is mounted) pole and Khanda still exist and are in a remarkably good shape. It was sad to see some of the outside sections were painted with hoardings and the walls could do with a fair bit of cleaning. It was the general consensus the original red stone will come out very well after sandblasting. Pakistan owes it to all their people to maintain its heritage. We were encouraged after meeting the young students that they would, in turn, do so for their future generation. 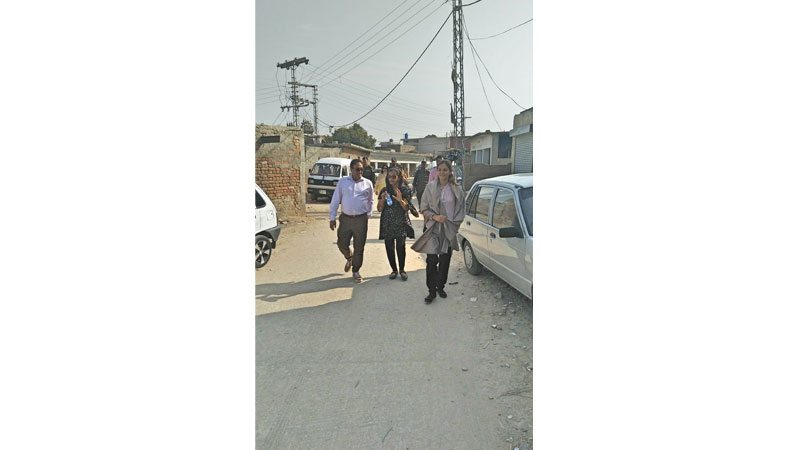 Sanghani Fort in Gujar Khan was built by Maharaja Ranjit Singh on top of a hill and the view from the top gives a panoramic picture. The two rivers which meet at the valley below, flow beautifully and this point is no doubt a tourist attraction. The fort was also used for keeping some prisoners of the state. Continued…