Both Pakistan and Jordan have hosted some of the largest refugee populations in history, which is a significant challenge 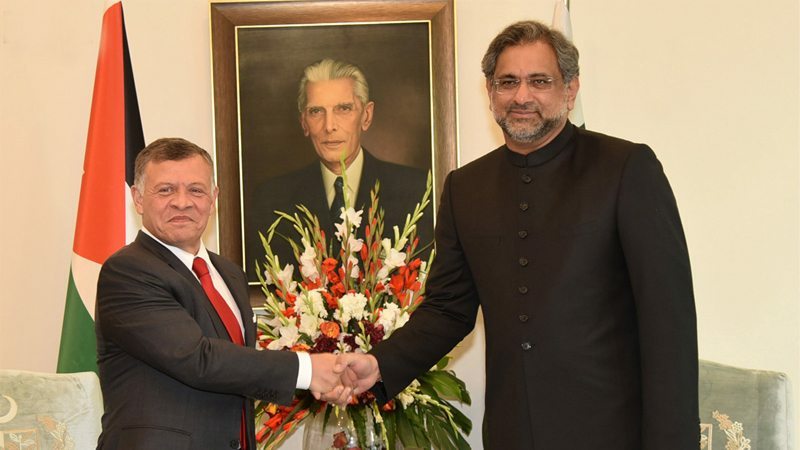 After more than a decade, King Abdullah II of Jordan’s Hashemite Kingdom was in Pakistan on a two-day state visit. The King, who was accompanied by high-level delegation, was received by the Prime Minister and is said to have had fruitful and constructive bilateral talks on several issues.

Bilateral talks were also held at the presidency with Mr Mamnoon Hussain where both heads of the states urge the need to continue the dialogue and cooperation in all spheres. The visit provided an opportunity to explore innovative ways to strengthen the cooperation in the diverse areas of mutual trust and interest.

Having historic, cultural and religious ties, Pakistan and Jordan enjoy deep rooted diplomatic, cultural, strategic, political and economic relations since the inception of the formal ties. The congeniality of relations is reflective of the fact that it is a regular practice from both sides to have high-level visits, keeping in view the warmth and closeness that both states enjoy.

Pakistan and Jordan are also part of the international and multilateral forums including Organisation of Islamic Conference and both states are supportive of each other’s views. Although much of the emphasis has remained on the cooperation in the defence field, however, there is a strong need and urge from both sides to diversify the trade and economic linkages keeping in view the experience and expertise that exists at several sectors and levels in both countries.

During the recent visit, the two states have also agreed to organise the joint ministerial commission on regular basis for continuous engagement and cooperation in various fields. One of the agreements was signed between the Ministry of Housing and Works of Pakistan and its counterpart in Jordan for continuous support in areas of joint constructions and projects. There is also an urge to develop deep rooted people to people contacts. The current volume of trade is merely hovering over 75 Million USD which is not reflecting the ‘excellent brotherly relations’ that both countries enjoy.

Kingdom of Jordan, bordered by Israel, Palestine, Iraq, Syria, Saudi Arabia and the Dead Sea, is almost landlocked country except that southern side where it has a shoreline along the Gulf of Aqaba that provides an access to the Red Sea. The geographical location has made the country significant and hence, making it a very important strategically located country of the Middle Eastern region. Jordan has a geostrategic location at the crossroads of Asia, Africa and Europe with having a beautiful capital city of Amman and a hub for the country’s economic, political and cultural centre. Jordan is standing at the 62nd freest economy at the 2018 index of the world.

It is important for Pakistan to have close relations with countries like Jordan at all diplomatic levels, the relevent ministries must be proactive in this regard

Jordan has also been declared as ‘high human development’ by the International human development report in 2014. It is an ‘upper middle income’ economy and has enjoyed the status of having the status of the Euro-Mediterranean free trade area. After gaining independence from UK, the Hashemite Kingdom of Jordan is a constitutional monarch with few natural resources and the incumbent King Abdudllah II took the throne in 1999 with an ambitious reforms agenda. With all strength, Jordan’s resilience speaks volumes about its leadership and its people keeping in view the unprecedented challenges from within and the region. That includes the dearth of jobs and challenges to speed up the reform process within the country while including the mounting terrorism threats from violent groups like ISIS, crisis of refugees, issue of Palestine in the neighbouring region. Despite all these hindrances, Kingdom of Jordan has remained on the steady path and due to the efforts of its leadership and thriving civil society with acute understanding of the fact that, the country needs to play a significant role in regional and international peace and stability efforts.

Keeping in view the significance of the Jordan’s geostrategic position and importance in the Middle East, Pakistan and Jordan have the cooperation at the level of defence and security. This collaboration is intense and on the regular basis.

The reason behind developing synergies at the level of military is to promote common understanding towards the regional security through deep rooted military to military relations, defence collaboration, defence trainings and exchanges. It is also important to note that both states face the similar kind of threats at the level of national security especially dealing with the terrorism. During the recent visit of King Abduallah-II, both state signed agreement of cooperation in the field of civil protection and civil defence. Many of the young trainees from the Armed forces of Jordan are regularly invited to participate at the National Defence University. The two countries also cooperate on joint intelligence cooperation to fight against terrorism.

Earlier, when General Raheel Sharif was in Jordan, he was given an unprecedented reception and was awarded the highest prestigious Jordanian Medal of Merit for working in a remarkable manner and courage to lead one of the largest and respectable army of the world, especially the work done to counter terrorism and role played for the promotion of peace and stability in the region. The military-to-military contact reached at the historic high level when Jordan agree to sale F-16 air craft to Pakistan back in 2014 and supported Pakistan to enhance its capacity and its deterrent threshold related to the Air Force.

Jordan is an emerging knowledge economic with main obstacles are scarce of water resources, reliance on the energy imports and regional instability however with the visionary leadership, the country has began diversifying its economic resources and became a stable economy. Pakistan and its businessmen have huge opportunity to tap the resources available in Jordan. Since Jordan’s economic base centres on phosphates potash and their fertiliser derivatives, tourism and overseas remittances, Pakistan can exchange the experience and began working on to develop joint projects to commercials the overall relations to a better level. There is a need from governments on both sides to engaged in the process and provide enough subsidies and support to those who are interested to invest from both sides.

It is important to note here that both Jordan and Pakistan faced similar level of challenges at the regional level. For instance, the growing insecurities in their neighbourhood and the rise of the refugees. Both Pakistan and Jordan have hosted one of the largest numbers of refugees and this is itself a bigger challenge. Pakistan and Jordan have cooperated with international agencies to support and provide all kind of utmost care to the humanity in duress. Both states have contributed towards regional peace building and provide the assistance in the stability and protection in their respective neighbourhood.

For instance, Jordan has historically viewed the refugee influx as the opportunity to advance the national development and based on the international aid, the country has channelised the response for the mutual benefits of refugees and the host. Similarly Pakistan has also optimised the whole refugee influx to provide better humanitarian assistance however now after the war on terror within and after the new national action plan against terrorism, the whole scenario has been changed.

There is also large number of Pakistanis, who are playing a constructive role in the life and letters of the Jordanian society including doctors, engineers, teachers and others. To this date according to official number there are 8000 Pakistanis living in Jordan.

There are several Pakistanis who are at the highest prestigious position in Jordan including Princess Sarvath El Hassan, Naser Mestarihi, and Ibrahim Shahzadeh, formally a Jordan’s famous news Anchor and Minister of State for Information and Communication Technology.

There are several businessmen who have established connections between the both states. Many Pakistanis are working in the agriculture section. There is very less number of Jordanians living in Pakistan. The important areas where both sides can cooperate are the pharmaceuticals and Pakistani market is amazing for the products that are produced from the Dead Sea, including cosmetics and olive products. Pakistan is exporting meat to several Gulf countries; this can also be done in Jordan. Along with meat, wheat, leather products, sports good, textile goods and garments business and construction equipment are few value additions for the existing market and can enjoy the free trade agreement with the US and Europe.

For Pakistan, countries like Jordan are important with which we have excellent diplomatic relations at all levels but our relevant ministries and related departments need to play a proactive role in channelising these relations and convert them for the benefits of the country.