Asma Jahangir smashes the patriarchy in death as well 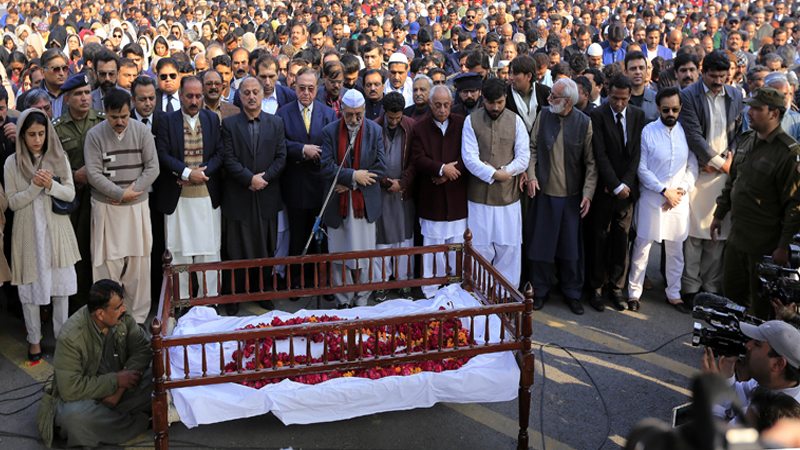 LAHORE: Like she did throughout her life, Asma Jahangir defied regressive and patriarchal traditions in death as well. Her funeral at Gaddafi Stadium attracted a huge crowd of women, men and children on Tuesday.

Asma Jahangir was later laid to rest at her family’s farmhouse in Bedian.

Besides Jahangir’s colleagues and comrades from the various institutions she helped set up, representatives of various political parties, human rights organisations, and state institutions also attended the funeral.

“The entire country agrees that Asma’s loss is an irreplaceable one, and the only way we can make up for it is to fight harder for human rights in Pakistan, to struggle for democratic change, rights of women and working class”, Taimur Rehman, a central leader of the Pakistan Mazdoor Kissan party, said while talking to Daily Times at the funeral.

He said Asma’s legacy of peace, equality and democracy could be continued not only in Pakistan but also in South Asia only if progressive voices teamed up and collectively foght to achieve what she stood up for.

A young female lawyer who has worked with Asma Jahangir said that the late lawyer and activist ruled the hearts of women lawyers across the country because she always supported and protected them. “She would always boost my confidence and her support was the reason why young women lawyers got equal opportunities as their male counterparts,” she told Daily Times with teary eyes.

Among those in attendance at the funeral were several people whose cases Asma had fought on humanitarian grounds. Abducted peace activist Raza Khan’s father was among the participants. When Raza disappeared in December last year, Asma took up his case and filed an appeal in the Lahore High Court (LHC) against the abduction. Talking to Daily Times, Raza Khan’s father said, “Pakistan is poorer without Asma Jahangir because she was always there for the marginalised groups who could not speak up for themselves.”

“When Asma took up Raza’s case, we were hopeful that our son would now be back soon. After her death, I don’t know if I can count on someone else to fight my case in the courtroom.”

Peace activist Deep Saeeda said Asma Jahangir was hated by the deep state because she never minced words while criticising the policies of intelligence agencies. “People who wanted to silence her accused her of being a foreign agent. To counter the propaganda against her, her struggle against military dictators should be added to school curriculum so that our young generation can be taught about the nation’s real heroes.”

Special security arrangements were made by the Police Department of the province. Traffic and parking plans were prepared to ensure that there was no inconvenience to the funeral congregation or general public.

Jahangir had passed away on Sunday at the age of 66. She was born in January 1952, received a bachelor’s degree from Kinnaird College and an LLB from Punjab University. She was called to the Lahore High Court in 1980 and to the Supreme Court in 1982. She later went on to become the first woman to serve as the president of the Supreme Court Bar Association (SCBA).

She was jailed in 1983 for participating in the Movement for the Restoration of Democracy (MRD). She led the protesting lawyers from the front in the 2007 lawyers’ movement as well, for which she was put under house arrest.

Among her various achievements was the founding of the Human Rights Commission of Pakistan and the Women’s Action Forum.