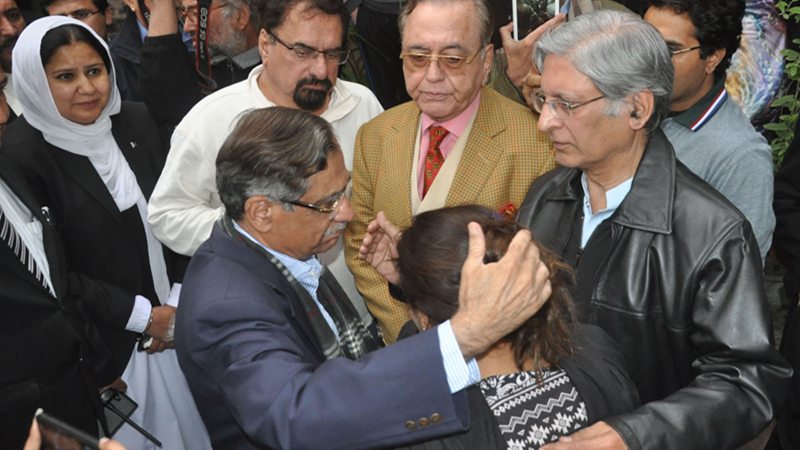 LAHORE: Asma Jillani Jahangir’s family sources have confirmed that her funereal will be held on Tuesday (tomorrow), February 13, in Lahore at Gaddafi Stadium at 2pm. Last rites of Asma will be performed after the return of her daughter from abroad.

Her daughter Muneezay Jehangir said in a tweet: “I am devastated @ loss of my mother Asma Jahangir. We shall B announcing date of funeral soon. We R waiting 4 our relatives 2 return 2 Lahore.”

The Supreme Court Bar Association (SCBA), the Pakistan Bar Council, the Punjab Bar Council and the Lahore Bar Association have all announced to observe a three-day mourning from Monday (today). Lawyers will not attend court proceedings as well.

The Lahore Press Club has also expressed deep sorrow and grief over the sad demise of Asma and said that may Allah Almighty rest her departed soul in eternal peace.

In a press statement, Punjab Chief Minister Muhammad Shehbaz Sharif expressed deep sense of grief over the sad departure of Asma Jehangir, a well-known lawyer and former president of Supreme Court Bar Association. While paying tribute to the great services of late lawyer for Constitution’s supremacy and rule of law, he said that she was a great and credible person in the world of judiciary. He said that Asma Jahangir was very active in lawyers’ movement and she had delivered great services for human and women rights also worked in a practical and fair manner to ensure the rule of law in the country. “Her services in the field of judiciary will always be remembered,” he said.

Pakistan Muslim League Quaid president Chaudhry Shujaat and former deputy PM Chaudhry Pervaiz Elahi expressed their heartfelt sorrow and grief over Asma’s death. In a condolence message, they appreciated her meritorious services in the field of law and said that she enjoyed popularity among the lawyers community. “She had a place internationally and she had always presented her thoughts, ideologies and stance boldly,” they said.

Expressing heartfelt condolence with the bereaved family, they prayed for bearing this great loss with patience and courage.

Afterwards, Shujaat Hussain visited the residence of Asma Jahangir for offering condolences. He said that she was a prominent lawyer and social worker and also pro-poor. “She had sought our help in many cases. She was a brave daughter of a brave father and a voice for democracy. Her services for democracy, human rights and supremacy of law will always be remembered,” he said.

Aitzaz Ahsan and Mahmud Kasuri said that Asma’s death was sad news for the nation that had made the country bereft of a bold and principled personality. She was a brave voice for the voiceless, oppressed people and always challenged the dictatorship. They said that Asma Jahngir’s name would remain alive in all hearts and her services could not be forgotten.

In their condolence message, they termed the demise of Asma Jahangir an irreparable loss. She rendered innumerable services not only for legal, but also for the downtrodden community of Pakistan. “She will always be remembered as one of the prominent and out spoken jurists. LHCBAR will soon hold a reference to commemorate her sacrifices for the lawyers, judiciary and poor masses of the country,” they said.