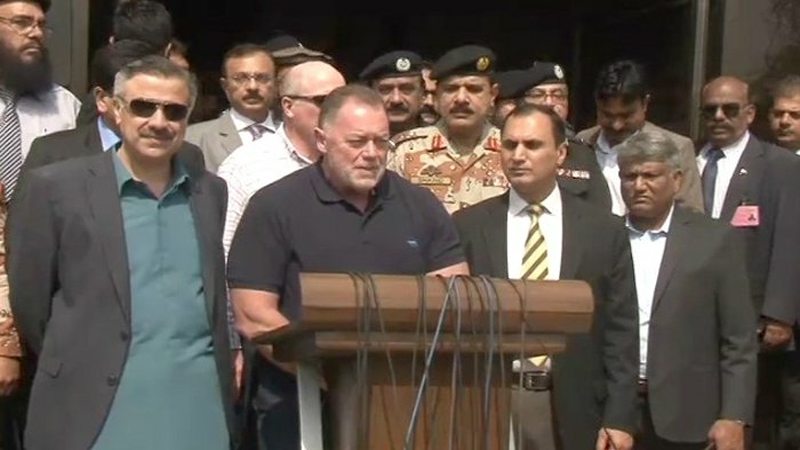 KARACHI: Karachi inched one step closer to host the final of the Pakistan Super League’s (PSL) third edition as the international risk management and security consultant for Global Sports, Reg Dickason, showed satisfaction over a full-dress rehearsal conducted here on Sunday. The third season of the PSL starts in the United Arab Emirates on February 22. The tournament will move to Pakistan for two play-offs on March 20-21 and the final in Karachi on March 25. Security expert Dickason, along with Richard Dennis, witnessed the full dress rehearsal for the final in Karachi. They were also briefed by Pakistani security and government officials on the arrangements. The Sindh government, police along with the help of Pakistan Rangers, Pakistan Army and other security agencies presented a complete demonstration of the security arrangements for the March 25 extravaganza.

“We were provided with a comprehensive drill and a professional presentation with the help of all security agencies, combined with the efforts of PCB chairman Najam Sethi, which is encouraging and it will be reflecting in the report that I’ll be submitting to the Pakistan Cricket Board (PCB) and the International Cricket Council (ICC),” said Dickason. During the rehearsal, Dickason was taken through the security from airport to the team hotel and then to the stadium. He was also briefed about the entrance of the players and how they will be taken to the dressing room and then to the ground. The rehearsal also included an Army commando rescue drill from the pitch for emergencies. He was also shown the full functionalities of the mobile hospital put in place at the venue. “Whatever we have witnessed today, it’s as good as I have seen in all my years of work but I can’t say a final word (on hosting the final) now and will submit my report within the next seven days,” Dickason told media. The team’s report will be integral to paving the way for the final. International cricket in Pakistan was suspended after a 2009 militant attack on the Sri Lankan team in Lahore killed eight people and injured seven visiting players. Pakistan’s national team have since played nearly all their home matches in the UAE. The country has been battling Islamist militants for over a decade, and insurgents have carried out several high-profile attacks across the country. Authorities have been trying to gradually return international cricket to Pakistan.

The final of the PSL last year was played in Lahore. Some foreign players made the trip, but many stayed away because of concerns about security. That was followed by three T20s against a World XI in September, and one T20 against Sri Lanka in October – all in Lahore. Pakistan made unprecedented security arrangements for these matches, with 20,000 military and police officials guarding the visiting players and the stadium. Karachi, the country’s largest city, last hosted an international match in February 2009 – a Test between Pakistan and Sri Lanka – a week before the Lahore attack. All six PSL teams have foreign players in their squads for the third season. Each team can field a maximum of four foreign players per match.