Kabul attacks: a plot against Pakistan?

In a latest development, the United States ruled out peace talks with the Afghan Taliban following a wave of bloody large-scale attacks   on Kabul’s key infrastructure including a military academy,   army battalion and the Hotel Pearl Continental which killed over 200 people.

Though the Afghan Taliban and Daesh have claimed responsibility for the deadly attacks, the Afghan government is, directly and indirectly, blaming Pakistan for providing sanctuaries and safe havens to the terrorists who are conducting attacks in Kabul.

In his article “Is Kabul falling?” Andre Vitchek, a war correspondent who was stationed in Kabul painted a gory picture of the Afghan capital, saying “Afghanistan is now facing mortal danger. It has to survive but it is not clear how it can manage.”

In his interview to a foreign journalist, dismayed Afghan President Ashraf Ghaniwarned  that after the departure of US, the Afghan capital could fall within three months and the  National Army might collapse in six months.

Former president Hamid Karzai took to the Twitter and accused a ‘foreign country’ of harbouring the terrorists to attack Kabul. He also asked for an immediate action against the alleged ‘country’.

The most blatant and glaring accusation came from Afghanistan’s Ambassador and permanent representative at the United Nations, Mahmoud Saikal who on Monday accused Pakistan Army of supplying military equipment to LeT, Taliban and militants involved in Kabul hotel attack. He went on to claim that the terrorists got their training in Pakistan’s province Balochistan.

Though Pakistan has vehemently denied the allegation, the observers believe that Pakistan is not capable enough of doing so, particularly at a time when Islamabad is striving to convince Washington to desist from resorting to  military solution, and  to find a negotiated settlement of the quagmire.

Afghanistan Times, in its editorial, urged the Trump administration to take direct action and eliminate safe havens of terrorists enjoying sanctuaries in Pakistan. “Despite pressures on Pakistan asserted by the US President Donald Trump’s administration, NATO and regional community, Pakistan-based terrorist groups including the Taliban and the notorious Haqqani network continue as instruments for terrorist and destructive activities across Afghanistan. These terrorist groups have been enjoying safe sanctuaries, training and fundraising centres in big cities of Pakistan including the Tribal Region, Khyber Pakhtunkhwa and Balochistan.”

Almost all of the analysis and opinion pieces appearing in the International press repeat the same scathing criticism against Pakistan and call for ‘punitive’ action against the country.

Back in Washington, US Senator Rand Paul was all set to introduce a legislation seeking a permanent ban of $2 billion civilian assistance to Pakistan. The bill recommends redirecting the said funds, amounting to $1.28bn from the State Department and $852 million from the United States Agency for International Development to the Highway Trust Fund. Earlier, following President Trump’s January 1 tweet, the United States had already withheld the Coalition Support Fund, military aid and civilian assistance to Pakistan.

The question is, what would happen if the US, in collaboration with India, resorts to taking what it calls “punitive” military action against Pakistan? The world has not realised yet what a major catastrophe this would be

The international community, intelligentsia and defence analysts see a method of “madness” behind the series of attacks in Kabul. Perceiving a well thought out plot to implicate Pakistan and justify incursions against Pakistan. They observe that “it is next to impossible that Daesh or Taliban would carry out attack after attack and that too on sensitive targets as well without any worthwhile resistance. How is it possible that the United States that has massive intelligence presence, both land and aerial, is unable to get information on such well-planned attacks.” “Rex Tillerson has warned that those who support terrorists or offer sanctuaries to them will no longer be tolerated. ‘The statement is understandably aimed at Pakistan and should leave no doubt about what plans the United States has for the region.”

Saner elements, however, advise the Trump administration to eschew the path of force as this has miserably failed to produce any results in the past.

Laurel Miller in a recent article titled  “The United States and Pakistan: Best Frenemies Forever?”, says “the United States needs a strategy in Afghanistan and policy towards Pakistan based on the best Pakistani behaviour it can have, not the Pakistani behaviour it wants to have.” The United States, it says, is once again mounting pressure on Pakistan to fall in line with the US policy in Afghanistan by ending the Afghan Taliban’s enjoyment of safe haven. Unsurprisingly, Pakistan is once again pushing back. 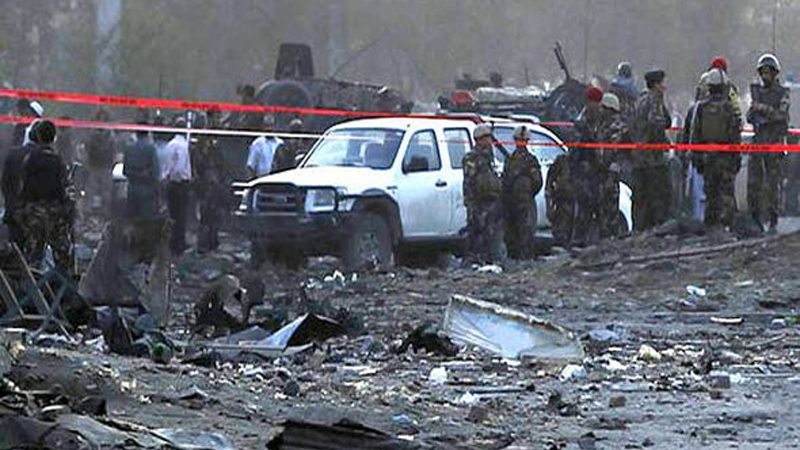 Amid the mistrust, mutual recrimination, and stale narratives that have increasingly characterised the US-Pakistan relationship in recent years, there is one Pakistani argument that I have heard routinely from officials and should be taken at face value: Pakistan does not intend to fight the Afghan war on Pakistani soil. “New political tensions and demands will create opportunities for Pakistan to build up other relationships in the region at US expense.”

That’s why Pakistan’s Defence Minister Khurram Dastagir Khan underscored over the weekend when he spoke about regional recalibration of the country’s foreign and security policy, including shifting towards Moscow and Beijing for military supplies.

Daily Times, in its January 30 editorial, said that many in Pakistan fear that there may be method behind the American ‘madness’; with some arguing that aid cuts represent the first step towards this end.” It argues that the latest American cash manoeuvrings are widely being seen by some as sowing the seeds of economic chaos; that preferred first step in the path to overseas regime change. “We are seeing possible and interlinked endeavours to destabilise this country to the point of Afghanistan.”

US President Trump’s announcement of “No Talks” with the Taliban came despite the on-going sincere efforts by China and Pakistan to bring the Taliban to the negotiating table and reach  reconciliation.

Recently, China hosted the talks along with foreign ministers of Pakistan and Afghanistan.  The Chinese leadership managed to bring warmness in the ties of both the countries.

In a meeting of Taliban’s Qatar delegation, held in Islamabad earlier this month, Taliban had agreed to come to the table to initiate talks with the US. However, they refused to hold talks with the Afghan government.

This obviously indicates that Trump’s abrupt decision, in the backdrop of series of attacks in Kabul, has buried the hopes of seeking the solution through parleys. This also aims at sabotaging the honest efforts being made by Pakistan. The five-member Qatar-Taliban delegation that included Shahabuddin Dilawar and Malawi Rasool, expressed its willingness to hold dialogue and find ways for political settlement to end the on-going violence in the country. It also means that there is some ill will lying in the midst. The situation is being deliberately taken to a point of no return.

The question is: what would happen if the US, in collaboration with India, resorts to taking what it calls “punitive” military action against Pakistan? This is likely to be catastrophic and the magnitude of it is not being realised. Afghan imbroglio is reaching a boiling point and the region will be on the verge of volcano if this “madness” is not stopped now. International community must take its cognizance as early as possible.

The author is a freelance writer