A history of Pakistan-Indonesia relations

A historic milestone in Pakistan-Indonesia relations was achieved when President of Indonesia, a visionary people’s leader of one of the largest Muslim country of the world, Mr Joko Widodo arrived in Islamabad on a two-days state level visit. Mr Widodo was welcomed with official protocol as President of Pakistan Mamnoon Hussain himself was present at the Nur Khan Base to welcome his counterpart from a brotherly Islamic country with having decades of congeniality of relations between the two states.

During his visit, Mr Widodo became the second President from Indonesia to address the joint sessions of the Parliament after President Dr Ahmed Soekarno, who had addressed the highest institution in 1963.

Mr Widodo arrived with high level members of his delegation alongwith the businessmen for bilateral talks at all levels. During the visit, several important agreements of cooperation have been signed including especially on the import of LNG and POL products, additional protocol to Preferential Trade Agreement for 20 new Tariff lines, trade facilitation and cooperation between the Foreign services institutions.

The ties are based on the history, religion, culture and commonality of interest at all international and regional forums. Pakistan and Indonesia stood by each other at every platform and continued supporting each other for common future of peace, progress, prosperity, stability, development and territorial integrity.

Relations between the two states date back to the pre-independence subcontinent — when Indonesia was passing through similar struggle against the Dutch Colonial rule, leaders of All India Muslim League extended their support to the country supporting its path to freedom.

When reviewing through the glorious historic past between Pakistan and Indonesia, one can easily assume the level of congeniality between the two brotherly Islamic countries. 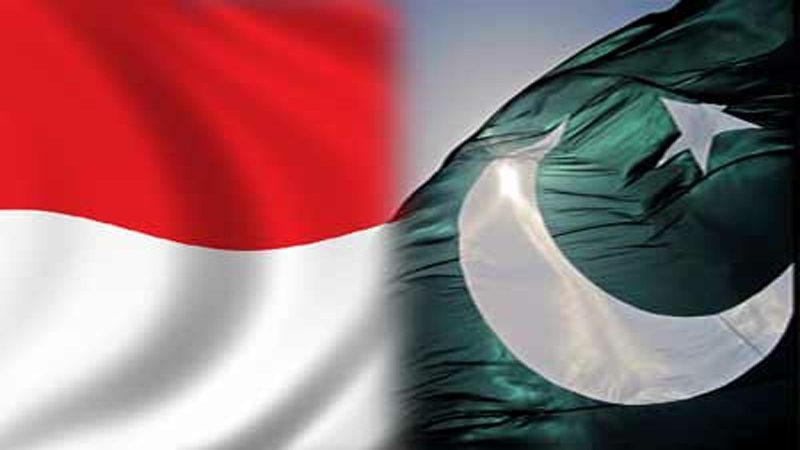 During the harsh colonial times in mid 40s, when the movement for independence was going on in the South Asia, East Asian nations were struggling for freedom from Dutch colonial rules. Muslim brethren from this part of the world were able to begin strong ties with the Indonesian Muslim and around about 600 soldiers were sent to support the resistance against the colonial aggression.

Some of them laid their lives while few of them returned back or settled in Indonesia to remain as a lasting bridge between the two nations. Later, the great Indonesian nation never forgot those glorious sacrifices made by martyrs with Indonesians during tough times of the colonial history.

Muhammad Ali Jinnah, father of the nation also ordered detention of the Dutch planes taking off and setting for the aggression to the Indonesian Muslims. As a result of these momentous past, it actually set the directions for the exemplary Muslim brotherhood that has remained iconic in the relationship of both countries. The actions taken by the great visionary leader of Pakistan, during that time has also manifested that Pakistan has a glorious past of supporting the countries in their fight against aggression especially the Muslim countries.

The then Foreign Minister Sir Zafarullah Khan also that the aggression of the Dutch planes towards Indonesia will be consider as equal to the attack on the soul of the Asia. In August 1995, Indonesia, during its golden jubilee celebrations fought with Indonesian freedom fighters and gave them highest medal of Indonesia and for Founder of Pakistan, Indonesia presented ‘Adipura’ medal to him for his love for Indonesian brothers.

When you have such magnificent past, then the countries continue their journey towards freedom and togetherness. Being leaders of the Islamic world, Pakistan and Indonesia have played their key role in putting forward the interests and support to the Muslim world with peace and prosperity. Both states stood with each other on the issues of bilateral and multilateral nature. Leadership on both sides had frequent sessions of meetings at bilateral levels and at the several international forums on regular basis including D-8, OIC, Non-Aligned Movement besides being the initiators of Asia-Africa Conference and similar forums.

Both states consider it significant to support each other especially Indonesia support Pakistan’s bid to be full dialogue partner of ASEAN and Indian Ocean Rim Association. Earlier several high level visits have been done in the past to increase the level of engagement between the two countries on all levels. The exchanges are meant to increase the scope of relationship to various levels including political, economic and socio cultural levels. Building on history, Indonesians always stood by Pakistan in the time of duress especially during the disastrous earthquake of 2008 and later floods of 2010. The relationships are not only based on the mutual respect but can be considered as iron brotherhood and support dynamics that has diversified to much higher level since the inception.

Indonesia is eight largest trading partner of Pakistan amongst the ASEAN countries. Currently the bilateral trade between the countries is standing around 2.3 billion USDs, which need to be improved through expansion of the potential of trade options. This needs to be done through exploring several other sectors including joint agricultural linkages and reviving the relationship amongst the trade bodies There is also need to exploit the Preferential Trade Agreement (PTA) between the two in order to work towards Free Trade Agreement. There is a strong need to enhance partnerships amongst the business enterprises through several initiatives including diversifying the trade options and outreaching to new markets of both sides. Indonesia and Pakistan are rich in natural and human resources, there is also strong need to build on our relations to cement the ties further. There is also need to develop strong linkages at the people-to-people level including exchange of civil society learning institutions, academic exchange, literature and other relevant departments from both sides that might help build the relationship and understanding on both sides.

Both Pakistan and Indonesia face similar levels of challenges including religious fundamentalism, terrorism, drug trafficking, human smuggling and violent extremism. Pakistan has been suffering and fighting against the religious intolerance and has her own war against terrorism that has moved from regional level to the domestic level with several active military operations. Sacrifices made by Pakistan have been acknowledged and supported by international and regional levels.

Pakistan, like Indonesia has tough laws regarding the drug trafficking however recently Pakistan has moved the leadership in Indonesia for the humanitarian release of Mr Zulfiqar who was falsely charged with the drugs trafficking who is terminally ill and languishing in the Indonesian Jail. PM Abbassi discussed the issue during the bilateral talks with the visiting President. Being a young democratic country, Pakistan needs to learn a lot from Indonesia in its path towards popular democracy. The current President Mr Joko Widodo is a true people’s leader where he drives and connects with the nations through utilizing social media and never hesitates to mingle with the general public at all levels. One may recall his walk of three miles after his motorcade was stuck in heavy traffic jam in Jakarta.

Both Pakistan and Indonesia need to continue building their strengths by supporting each other at all levels for the sake of mutual benefit and good of not only the Muslim world but entire Asian region. Both have strengths and powers to transform the regional dynamics towards the mutual goals of peace and prosperity but as the President of Indonesia in his speech has highlighted and said that ‘Conflict and wars will benefit no one’, both nations may join hands toward eradicating and eliminating traditional and nontraditional security threats through democracy, participation as true partner of the world peace.