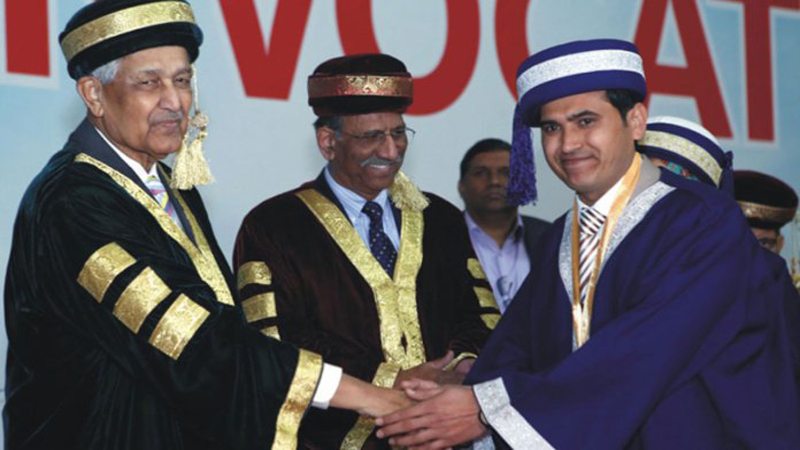 ISLAMABAD: Degrees, gold medals and awards were conferred on as many as 213 graduates at the 5th Shifa Tameer-e-Millat University (STMU) convocation, which was held at the Jinnah Convention Centre, Islamabad, on Saturday.

In his inaugural speech, Vice Chancellor Prof Dr Mohammad Iqbal welcomed guests and congratulated graduates and their parents. He said that STMU had started its journey of knowledge in 2012 and it has earned a good name because of its groundbreaking research in healthcare and quality education.

The vice chancellor mentioned successful range of various activities held at the university premises on the theme of medical healthcare facilities along with nursing care, pharmacy, physical therapy and medical technology. He advised the graduates to continue with the process of learning throughout their lives.

Addressing the Convocation, Dr Abdul Qadeer Khan said that it was a matter of immense pleasure for him to be at STMU. He said that the soil of Pakistan is ideal for the dreamers who wished to find the interpretation of their dreams with skills such as positive thinking and hard work. He laid stress on the graduates to support the vision that aimed at placing Pakistan among top of the world in terms of education and research.

“We still have to go many miles to meet the international standards in education sector. For this purpose, we have to prepare our students so that they become able to face any challenge rising in any environment and anywhere in the world. I am very pleased to know that all the courses offered by Shifa Tameer-e-Millat University are accredited by the respective professional councils and recognised by the Higher Education Commission of Pakistan and the university is very successful in the implementation of the desired standards.”

Dr Khan advised students to serve their country. “We all avow to work for making this country a welfare state where everyone is allowed to spend life of the basis of social justice and where everyone can live in peace honor,” he concluded.

In his address, HEC Chairman Dr Mukhtar Ahmed congratulated all graduates and their parents. He said STMU was one of the finest institutions that is building positive image of the country.

He said he had visited many universities and found Pakistani students possessing excellent skills and abilities that could be used for the betterment of the country. The HEC chairman said that trustworthiness, honesty, integrity and loyalty were the only principles that would upgrade us as a nation. Later on, they gave away degrees, prizes and medals.