The haunted land is now a playground between zombies and ghosts. Once sleeping monsters wake up, they start lurking in ways and streets on their own. Their moves can’t be controlled and guided for long. They set their own rules and start playing for their own contentment. Tables are then turned making masters pawns of their own game. Such is the state of affairs in the land of the pure.

The country is left on auto-pilot at a moment when the contours of new world order are in their making. No one is concerned with the developments in Middle East and brutalities in Indian held Kashmir are on back-burner for years. Those we elect to find solutions of our problems and make our lives better are marred with their business interests scattered in various countries and they do not have enough time to address the governance issues. We, the people of Pakistan, are left to solve the puzzle regarding functions and responsibilities of an elected government.

The prolonged sit-in at Faizabad Interchange and ineffective management stripped Islamabad off its credibility to maintain law and order situation. Damages done are multifaceted and will continue to haunt us locally and internationally. 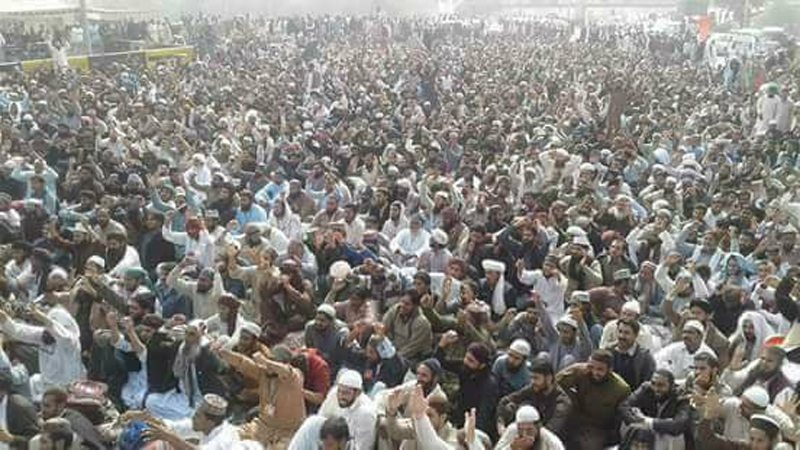 Lessons are learnt that not the legitimacy of demands but the presence of a few thousand persons makes the government pliant. After the successful seize of Islamabad, the forces of destabilisation are now all set to unleash their shenanigans in Lahore. Unfortunately, it seems the Punjab government will follow the same policy adopted by the federal government comprising a botched action to drive the expedition away.

The ‘most experienced’ government seems fully determined to meticulously introduce sit-ins as a norm of life. Many considered the sit-in at Faizabad Interchange as the last episode by civil military production house at least until upcoming general elections in 2018. But it ended with many questions unanswered regarding pre and post agitation developments.

As the real culprits behind these modifications are yet to be identified, the matter is far from over and may suddenly burst into flames again. With the entry of Pir Hameed Ud Din Sialvi and resignation of five PML-N law makers, the issue may go beyond the resignation of Punjab Law Minister Rana Sanaullah and turn into a movement in upcoming days.

On the other hand, publication of inquiry report about Model Town massacre has raised many question about the extent of Punjab government’s culpability. Disregarding the rhetoric of either side, those killed and injured on that unfortunate day still await justice.

In another development, Jamaat-e-Islami (JI) chief Sirajul Haq has threatened a sit-in in Islamabad if demands for the merger of FATA with Khyber Pakhtunkhawa are not met until December 31st. Only God knows how many agitations we will witness in the future. To be a sit-in leader had never been that easier.

The major threats facing the Punjab government comes from two issues: demands for the resignation of Rana Sanaullah and the Model Town massacre. Between the two, to handle the aftermath of inquiry report is more challenging. Common factor between the two is that neither will go away by itself.

So why not start with the easier option? It is true that Rana Sanaullah’s faith is his personal matter but if his resignation can save the country of unrest and chaos, it is not a big price to pay. Had Zahid Hamid resigned on the first day of sit-in, the federal government could have avoided the humiliation it faced 3 weeks later. Ideally the federal government could identify the persons responsible for modifications and hold them accountable, but it did not take that route.

With the entry of Pir Hameed Ud Din Sialvi and resignation of five PML-N law makers, the issue may go beyond the resignation of Rana Sanaullah and turn into a full fledged movement in the near future

Now it is more likely that the Punjab government will have to follow the established precedent. The early the better. Regarding the Model Town massacre, the killing of innocent and unarmed citizens in broad daylight cannot be denied because it all happened in front of TV cameras. Ironically, Gullu Butt has served jail for breaking vehicles but whoever ordered the mass killing is yet to be identified and taken to the task. If the order for massacre did not come from the top, virtually nothing should hinder an independent investigation, in a way approved by families of victims. Only this can stop Tahirul Qadri from politicising the issue.

The most important question of today is that what tops the wishlist of our democratic rulers. It is unclear if getting rid of present quandary has any place on actual priorities’ list. Some believe that only in such a state of precariousness, with the help of conspiracy theories, the stock of victimhood could be sold out. After all, for the personal interests of ruling elite, the parliament can perform hyperactively to amend and pass laws.

The most recent example is the passage of controversial Election Bill 2017 which the government bulldozed through the parliament to allow re-election of Nawaz Sharif as president of PML-N despite disqualification. Surprisingly, the footprints of establishment are mostly found beyond the limits of personal interests. Being devoid of moral high ground and debilitating authority, PML-N’s leadership, at minimum, should keep the controversies at bay and nip the infectious issues in the bud. But why it let the things worsen and complicated is quite incomprehensible. Perhaps the strategists of the party have started to believe that the mantra ‘conspiracy against democracy’ is a perfect substitute for good governance and thus nothing else is required.

PML-N is facing today external and internal existential threats. The party is divided in different camps and each faction is faced with survival challenge of its own. It requires more than a mere chance that Islamabad siege is followed by an unexpected expedition on Lahore.

It was Shahbaz Sharif who first demanded the resignation of minister responsible for the modifications in the sworn oath statement and showed Khadim Hussain Rizvi the way to Islamabad. He was returned the favour with the demands for his own law minister’s resignation. Times are uncertain and the horizon is covered by political smog. Times ahead are of betrayals and backstabbing to forge new alliances for political advances. The ghosts of destabilisation will thus continue lurking here and there.