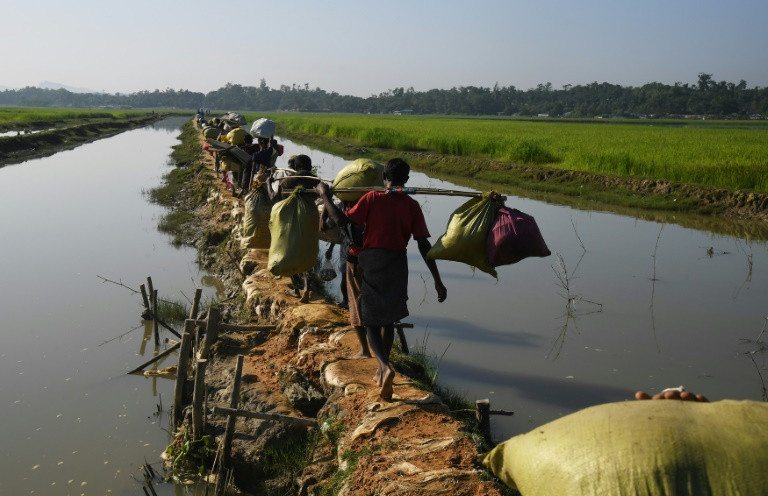 Myanmar’s army said it found 10 corpses in a mass grave in a largely Rohingya village in Myanmar’s northern Rakhine state, the epicentre of a violent military crackdown that triggered a mass exodus of the Muslim minority.

Northern Rakhine has been gutted by violence that erupted on August 25, when the military launched a sweeping operation against Rohingya rebels who attacked police posts.

Since then hundreds of villages have been torched and some 655,000 Rohingya have fled over the border to Bangladesh.

Doctors Without Borders says at least 6,700 Rohingya were killed in the first month of violence, while the UN has accused the army of waging an ethnic cleansing campaign with possible “elements of genocide”.

Myanmar, a mainly Buddhist country, has aggressively denied the charges and largely blocked off access to the conflict zone.

Late Tuesday the army said it had exhumed 10 bodies in a grave discovered earlier in the week in Inn Dinn, a village in Rakhine’s Maungdaw township.

“An investigation is being carried out to uncover the truth behind the grave,” said a statement published on the army chief’s Facebook page, alongside blurred photos of skeletal bodies being dug out of a pit.

“Action will be taken according to the law if security members are found to be involved in the case,” the statement added.

One member of the team that unearthed the corpses told AFP, on condition of anonymity, that the bodies’ state of decay suggested they had not been killed recently.

“We cannot differentiate who the dead bodies were because we only saw their skeletons and bones,” he said.

The discovery of the mass grave comes one week after the arrest of two Reuters journalists who have closely covered the crisis in Rakhine.

The area has been out of bounds to the media since the military crackdown began with the exception of closely-monitored press trips organised by authorities.

Myanmar has also blocked a UN fact-finding team from accessing the area to probe allegations of rights abuses.

Myanmar reporters Wa Lone, 31, and Kyaw Soe Oo, 27, who have not been seen since December 12, have been charged for allegedly possessing documents relating to security forces in Rakhine.

Their families, lawyers and colleagues have not been told where the two are, nor been allowed any contact with them.

Reuters did not immediately confirm what the journalists were working on or if their investigation was linked to the mass grave in Inn Din.

The arrests have deepened concerns about fragile press freedoms in the emerging democracy.

Human Rights Watch on Wednesday demanded the pair’s immediate release, echoing similar calls from the EU, US and UN.

The reporters face a maximum sentence of 14 years in jail under the colonial-era Official Secrets Act.