The government, no doubt, mishandled the situation. It should have called a meeting of all political parties, a joint session of Parliament and a meeting of the powerful national security council to discuss and devise a strategy on how to dislodge the TLY dharna

Following the government’s failure to disperse the Faizabad sit-in and later the countrywide sit-ins by the Tahreek-e-Labbaik Ya Rasoolullah (TLY) it is obvious that the government would have to talk to the agitators and submit to some of its demands. If any talks were to be held between the government and TLY, the former won’t be talking from a position of strength and it would have to submit to demands of the latter.

The wording of the mutual pact brokered by the establishment clearly gives the non-state actor TLY an upper hand on several counts.

The agreement has been signed with a party that has flouted court orders, broken laws with impunity, and openly indulged in hate-speech. It is an agreement between law breakers and law-enforcers but the latter representing the state have been admonished one-sidedly.

As per the agreement, the non-state actor TLY has been cleared of all charges. It neither has to express remorse nor seek apology from the millions of Pakistanis who were drastically affected by their dharnas.

All of its workers have to be freed within three days, cases and orders for their home-confinement have to be withdrawn and no legal action has to be taken against them. How would the government be able to release TLY agitators who have been booked under Anti-Terrorism Act remains unclear.

Though the resignation of the law minister is likely to set a very dangerous precedence, the matter will not come to an end with this. It will only embolden the TLY and its demands will continue rising after this

The government has also committed itself to form an enquiry board, taking TLY into confidence, to ascertain the culprits for the November 25th action and to punish those responsible within 30 days. However, no such enquiry is to be conducted against the TLY for violation of laws and damaging public or private properties.

An ideal situation would have been that the agitators had called off their dharna within the deadline given first by the Islamabad High Court and then by the Islamabad administration, but it was ultimately the government that had to succumb to political pressure, renege on its basic responsibility to restore the writ of the state and to prosecute all those who were arrested during this legal campaign.

Though the resignation of law minister, as per the agreement, is likely to set a very dangerous precedent, the matter will not come to an end with this. Such appeasement will embolden the TLY and its demands will continue rising after this. A group of TLY has already asked for resignation of Sanaullah, Punjab law minister. Such appeasement has neither worked before nor will be of any benefit towards solution of the current problem.

It was expected that no political, religious or social figure would support these agitators and instead openly support the state institutions but though there had been no criticism by some leaders -like Imran Khan, Sirajul Haq etc- of the prolonged illegal blockade of roads by the TLY, the government has been continuously and severely criticised all these days by them.

Opposition politicians even went a step ahead of the TLY. While it demanded only resignation of the law minister, they were demanding resignations of interior minister and even prime minister for “mishandling the situation.” Emboldened by this backing, the TLY too was seen pressing for the resignation of entire federal cabinet.

The Pakistan Army spokesman too had reported the Army chief to have asked the government “to handle the issue peacefully avoiding violence from both sides as it is not in national interest and cohesion.”

The advice may have stemmed from a sincere wish to bring peace, but it cannot be denied that only the state has the authority to use force — which is called the monopoly of violence — and no non-state actor — group or individual — has any such privilege vis-à-vis the state. 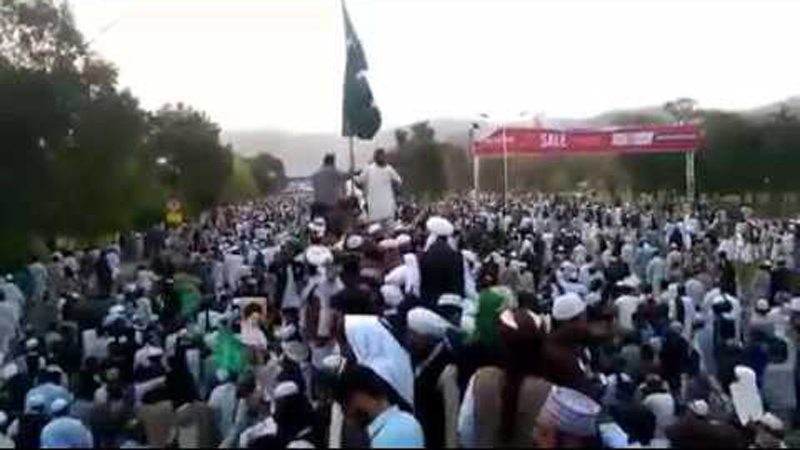 While the state has had all legitimate right to use force to disperse the dharna after peaceful attempts to do so failed, the other side- a non-state actor- must have obeyed the law. When it confronted the state, and continued with its intransigence, it should have been openly criticised, opposed and clearly asked to behave. Rather than equating the two and urging both to avoid violence, all democratic forces and constitutional institutions must have openly and clearly voiced support for the state. How can the state and a non-state actor be dealt equally when the former is trying to establish writ of the state while the latter is trying to resist and refuse to submit to the law of the land and the court decisions?

The two sides of the present situation cannot be dealt with equally. Whereas on one side is the state and its institutions, on the other one is a non-state actor. The latter was not ready to pay any heed to allow people free movement despite repeated requests from intermediaries and orders from courts. But when the government -the executive organ of the state and representative of its sovereign power- started operation to ensure free movement on the roads, some politicians, who had remained tight-lipped thus far on the illegal blocking of roads by the TLY, started severely criticising the government for resorting to violence.

Criticising the government alone for not solving the issue through peaceful talks and resorting to use of force is sheer injustice. In fact, ever since the sit-in began 20 days ago, the government had been using all available channels to talk to the TLY leadership and tried its level best to make it call off the dharna. It was the TLY leadership that was not ready to budge even an inch from its stated position or to accept any request by mediators and orders from court to disperse peacefully. What would the government do in such a situation? To remain silent spectator and thus not only deviate from its foremost responsibility of ensuring law and order and establishment of writ of the state but also risk annoying the IHC and SCP that were calling for ending this illegal dharna quickly?

Another thing that merits attention is the way the “workers” of the TLY battled with the law enforcement agencies’ personnel. They were not ordinary workers and looked like highly trained individuals. It is never easy for ordinary political workers to confront, tease and defeat the trained and experienced LEA personnel. And where did they get gas masks, gas guns and other apparatus must also be investigated.

The government, no doubt, mishandled the situation. It should have called a meeting of all political parties, a joint session of parliament and a meeting of the powerful national Security Council to discuss and devise a strategy on how to dislodge the TLY dharna. It didn’t.

And it was naturally reluctant to use force as it felt this would fetch it against the powerful and now resilient Brelvi school of thought to which the TLY belongs. As always, it was groping in the dark pinning hopes on religious personalities that had no influence on the TLY to change its mind on demands and dharna. The official powerful civilian cum military channel was not considered on time. The result is that its reluctance to use the above official channels and to use force unless ordered to do so by court and that too in a haphazard manner has endangered the authority of the state vis-à-vis a non-state actor.

Change in government and policies must be brought and allowed only through popular vote and parliament. Dharnas cannot and must not be allowed to dictate terms and force ministers and governments to resign. Constitutionalism and Rule of law must not be compromised. Submission and Appeasement to one such group is tantamount to giving up constitutionalism forever which will have dangerous repercussions for the country.

The writer is an academic and researcher who has written extensively on political and social issues. He blogs at www.tahirkatlang.wordpress.com and can be reached at tahir_katlang@yahoo.com