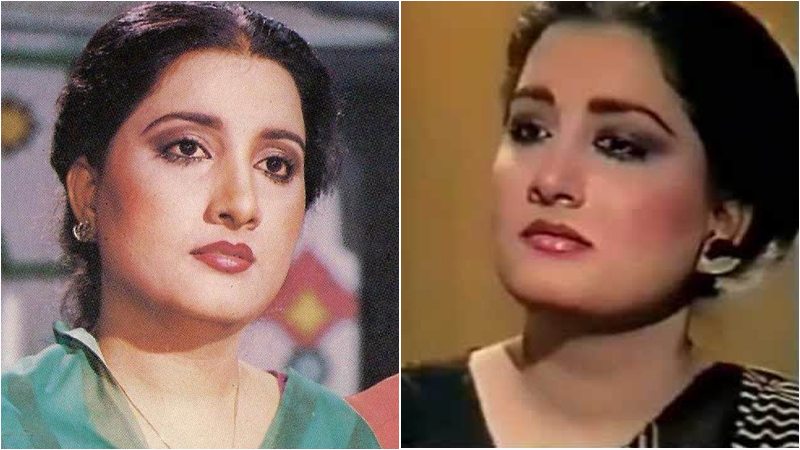 I remember that two simple looking girls with short shirts and Patiala shalwars with straight hair used to sing folk songs, especially ‘Menu Soda Waater Lei Dei Vei Roj Balma Kehndi’ in Uxi Mufti’s show Lok Tamasha from PTV’s Rawalpindi center. It was the early 1970s and TV transmissions back then were in black and white. The two girls clicked as a duo. The pair was of sisters Hameeda Akhtar and Naheed Akhtar. I believe some time later Hameeda entered into wedlock with Uxi Mufti. Both sisters had a nice and clear voice and they were in tune with one another as a natural gift of God; they belonged to Multan. Solo item ‘Roj Balma Kehndi’ was a hit song by Naheed Akhtar for Lok Tamasha. She looked very cute in her youth in this LIVE performance. This series used to be musically directed by legendary folk singer Tufail Niazi.

I started hosting a music programme Sangat in 1972-73 from PTV, directed by Rafique Ahmad Warraich: a pop music show where the tunes were Eastern but the music was accompanied by AJAYS Band comprising Western instruments. All the popular and budding vocalists were invited to perform in this show that mostly featured LIVE recordings. We decided to try Naheed Akhtar for this series and she clicked the moment she started singing her songs. We tried to make her look more modern – hair style and dress. At that time, she rubbed shoulders with other singers like Tasawur Khanum, Naheed Niazi, Zahida Sultana, Bilquis Khanum, Nayyara Noor, Humera Chaudhry, Humera Rasool etc, who performed on this show.

Later onwards, producer Syed Akhtar Waqar Azim at Pakistan Television Corporation, Lahore Center launched a series with the name Sukhanwar comprising mostly of ghazals. If Fareeda Khanum and Nayyara Noor sang, so did Naheed Akhtar. She had a good throw in her voice. It was sweet to hear her sing at ease on a higher pitch also. Music Director Khalil Ahmad’s tune set on lower pitch in ‘Tum Sei Ulfat Kei Taqqaze Na Nibhaye Jaate’ clicked with her. Another ghazal ‘Jahan Tera Naqsh-e-Qadam Daikhte Hain’ clicked with her voice as well. Naheed was very sensitive about her being taken as a serious singer and apart from the above two ghazals, ‘Kat Bhi Gai Judai Bhi Kab Yei Hua’ by poet Adeem Hashmi composed by Muhsin Raza was a step ahead in fulfilling her desire. Another ghazal, composed much later by M. Ashraf for Munir Niazi’s lyrics ‘Zinda Rahain Tau Kaya Hain Jo Mar Jaein Hum Tau Kaya’ is an evergreen number. The ghazal ‘Shab-e-Ghum Mujh Sei Mil Kar Aise Roi/Mila Ho Jaise Sadiyon Ba’a Koi’ is another heartbreaker. The song talks about sorrow, love, and hopelessness in a way that will make you sit and think for a while.

Naheed is a versatile singer with a straight, sweet, and bold voice and a broad range – she justified this in ‘Thaap Tilak Sab Cheeni Re Moh Sei Nainan Milai Kei’ by Ameer Khusrow, rendered initially for PTV. Having started singing for the Pakistani Film Industry much later, her fans remember her for the song that rated her at the top, ‘Kisi Meherbaan Nei Aa Kei Meri Zindigi Saja Di’ from music composer M. Ashraf’s film Shama. One of her songs composed by A. Hameed ‘Tha Yaqeen Keh Aaei Gi Yei Raataan Kabhi’ for the movie Suraiya Bhopali in qawwali format was a popular song of its time.

Her song ‘Yei Rangeenie Naubahar Allah Allah Allah’ is a staple in many mehndi occasions. Homage to God, the song describes all the beauty in nature and appreciates His creations and all the wonderful things around us. The song ‘Aaei Mausam Rangeele Suhaane Jiya Na Hi Maane’ originally rendered by Zubeda Khanum for Rasheed Attre’s film Saat Lakh has been revisited by many artists. The essence of this song is that it is a calling out to one’s beloved because the weather demands it. Naheed Akhtar fulfilled this requirement. In the original song Neelo lures the romantic pair Sabiha Khanum and Santosh Kumar to love each other in pink weather. Naheed paid tribute to Zubeda Khanum by singing another hit song ‘Teri Ulfat Main Sanam Dil Nei Buhut Dard Sahe Aur Hum Chup Hi Rahe’. 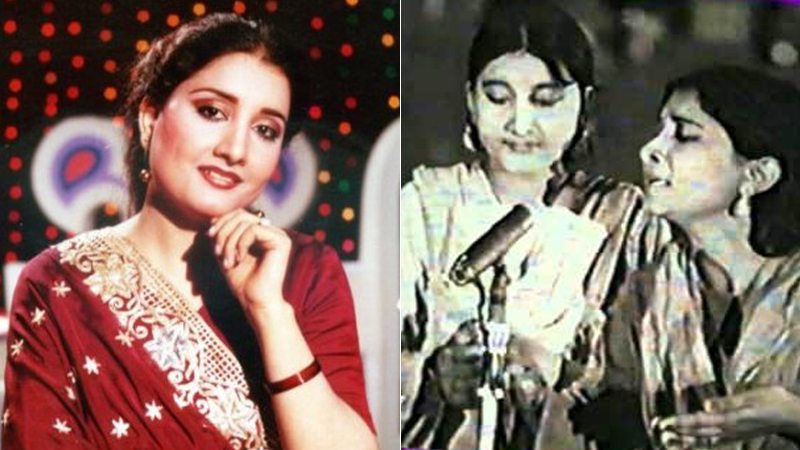 The song ‘Kisi Meherbaan Nei Aa Kar’ is from a high cast (Muhammad Ali, Zeba, Waheed Murad, Nadeem, Deeba, Babra Sharif, Allauddin) film Shama filmed on Zeba playing the piano. Muhammad Ali is sad as Zeba is singing for Waheed Murad. This song depicts the emotions and sprinkled with sadness, it speaks of that one person who comes along in your life and makes it better. This song was a big boost in Naheed’s career. Another song ‘Aise Mausam Main Kyun Chup Ho’ was a lilting song from this film. The song ‘Kuch Boliye Huzoor’ was filmed on Sangeeta for the film Anari while she seduces Nadeem. The song ‘Yei Duniya Rahe Na Rahe Mere Humdum’ from the film Mera Naam Hei Muhabbat, if was a career boost for Babra Sharif and Ghulam Muhaudin, so was it for Naheed Akhtar and Mehdi Hassan as well. The same film had Naheed singing ‘Tujhe Pyar Karte Karte Meri Umr Beet Jaye’. The song ‘Kuch Unki Jafaaon Nei Loota’ composed in qawwali beat from Pakeeza is another lilting number by Naheed. She sang an English song ‘Some Say I Am a Sweetie’ for the film Kora Kaghaz.

Naheed Akhtar was born on 26th September 1956 in Pakistan. She has three sisters and four brothers. For playback singing for films she was discovered by veteran musician M. Ashraf as a teenage sensation in the mid-1970s. She dominated Urdu film music for a while being a successful replacement for Runa Laila who had left Pakistan. Her inaugural film was Nanha Farishta in 1974 and in the same year she climbed to the top with super hit songs in film Shama (mentioned above). Her stylistic mastery and trade-marked television appearances continued throughout the 1970s. 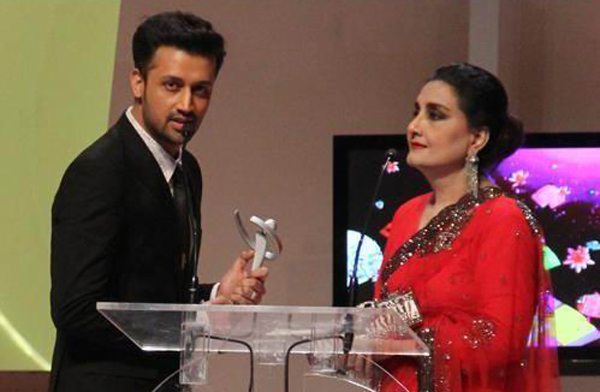 Why Naheed Akhtar left singing: In an interview with BBC, Naheed said that she had taken leave from singing in 1986 as she needed rest; also her meeting with journalist Asif Ali Pota for an interview was a catalyst in accepting his offer for marriage. She got married in 1994. Though Naheed desired to continue singing even after marriage she became busy in raising her children. She claimed that she was always close to her fans who never left her. Wherever she went her fans recognized her and appreciated her music that she did as a full-time job for as long as she sang. About the present state of music in Pakistan she stated that music had instead of acting as fuel for the soul, taken the shape of visuals for the body’s needs. Our present artists should look into the future as to what sort of impressions they are leaving behind. Passion seems to be missing.

After 25 years of absence from singing, Naheed Akhtar performed for PTV in Islamabad in 2014 in an evening celebrating her comeback and paying tribute to her lifelong services to music. She sang ‘Allah Hi Allah Kiya Kareo’ (from film Pehchaan, music by Nisar Bazmi), ‘Tum Sei Ulfat Kei Taqqaze Na Nibhaye Jaate’, ‘Tutu Tutu Tu Tara Tara’, ‘Menu Soda Waater Lei Dei Vei Roj Balma Kehndi’, ‘Kalyan Na Jana Saade Naal Naal Chalo G’, ‘Pyar Kabhi Karna Na Kum Mar Jaye Gi Teri Aashi’. All the artists joined her on stage and danced to her songs including Meera, Babra Sharif, Sahir Lodhi, Ghulam Muhuddin, her husband Asif Pota and children. An Indian fan Arup Sarkar commented on social media: ‘I am an Indian. The Partition of India deprived me from listening to these great musicians. I hope to come to Pakistan one day and travel all over. And I am 100% sure one Pakistani will be called ‘Bhai Jaan’ … love you Pakistan. Love, from India?’.

Present life: Naheed Akhtar stays busy with her kids and is not actively pursuing a singing career especially after the demise of her husband Asif Ali Pota. Pota started his career as a feature writer and worked with many newspapers. Later, he worked as a writer and director for the TV and Film industry. He passed away on Saturday 8th July, 2017 from cardiac arrest at the age of 55. He has left behind two wives, four sons and two daughters.