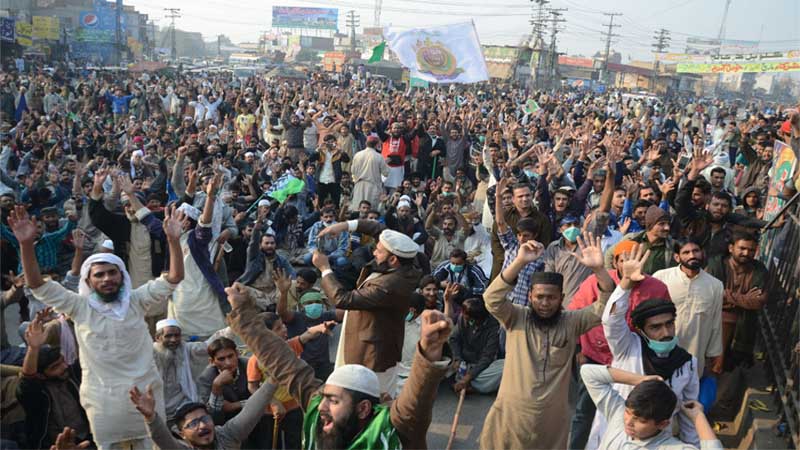 Lahore: The night before, warnings creeped in Lahore Press Club, word went around that violent clashes might break out. Some journalists brainstormed in whispers within their cliques about what they would do in case of an operation. “Technically the protest is illegal, and unconstitutional but it is for the right cause,” a young journalist from an Urdu newspaper said defending the right of the protesters. “They are there for the right reasons… the government should listen to their demands and the protesters will go away.” Many journalists resolved with a soft corner for the protestors, discussing why it would be wrong to cover the dharna in a negative light.

“It is about power and everybody is interested in using it for their own political gain,” one journalist from a local television channel said about the Faizabad sit-in, commenting on how far the violence could go, “whoever wins from the clashes will display power, and it definitely won’t be the government.”

Reports of right-wing religious groups being mobilised in several neighborhoods in Lahore came in through incoming calls on journalist phones. The protest was the talk of the town after Friday prayers, that in one of the mosques in Lahore was led by newly-released Hafiz Saeed, the Jamaatud Dawa chief.

City paralysed: The supporter of Labbaik Ya Rasoolullah (LYR) had been itching for a fight. Some sources reveal that supporters across several religious parties were invited to participate in the looming situation and the numbers of several thousands who took to the streets show that the invitation worked.

“We are here to give our lives. We will not get scared of this evil government,” Manzoor Hussain, a 28-year-old drop out from medical school, said. I asked him how he’d feed his family if he’d drop out from college, to which he looked up at the sky, and said, “Allah will take care of everything.”

The protestors were prepared in every manner, and were fast in spreading throughout the city by around noon. One protester who was responsible for blazing the roads with lit up wood and stones in Thokar Niaz Beg said they had brought in axes in the morning, to chop branches from trees and burn them to block main arteries of the city.

Protesters blocked the city in a well-coordinated manner, coming in from over three dozen locations in the city. Boys who took charge of blocking the streets came with batons and stones, with designated roles and cell phones for an efficient coordination. Beards or no beards, all protesters carried some form of weapon.

Street battles: No police or law enforcement was in sight in most smaller areas, but when they showed up in smaller streets, the protesters attacked them often uninvited. Buildings were attacked, cars were attacked, traffic signals were attacked and in one case surveillance camera was attacked.

Like the protestors, most police officers were petite, though well equipped. Sources in the police say, they were allocated to secure the main roads of the city, but were not prepared for protesters taking over 30 posts. The insufficient preparedness of the police compared to the active mobilisation by religious groups is what may have led to the chaos.

Mixed bag of slogans: The chanting of slogans had mixed themes in different areas, while some slogans were aligned with that of the followers of Khadim Hussain Rizi, chanting of Labbaik Ya Rasul Allah with hands waving in the air; others slogans heard at demonstrations were ‘Let’s get rid of this evil government,’ and ‘Pak Fauj Zindabad.’

Civilians’ hardship: While, the protesters and law enforcement seemed prepared for the showdown, civilians weren’t. On Saturday, the government schools were open as usual. In the middle of a city breaking out a riot, concerned parents rushed to school to fetch their children many of them pelted with stones on their way.

Some of the most crowded places where vigilant was strong include Data Darbar Chowk, Bhatta Chowk, Thokar Niaz Beg and The Mall. Due to blocked roads, many patients on way to the hospitals could not reach, while one child reportedly died on the way. I asked a protester what he thought of the inconvenience to the civilians, he said, “I assure you this is in the way of Allah, and Allah with accept their sacrifice.”