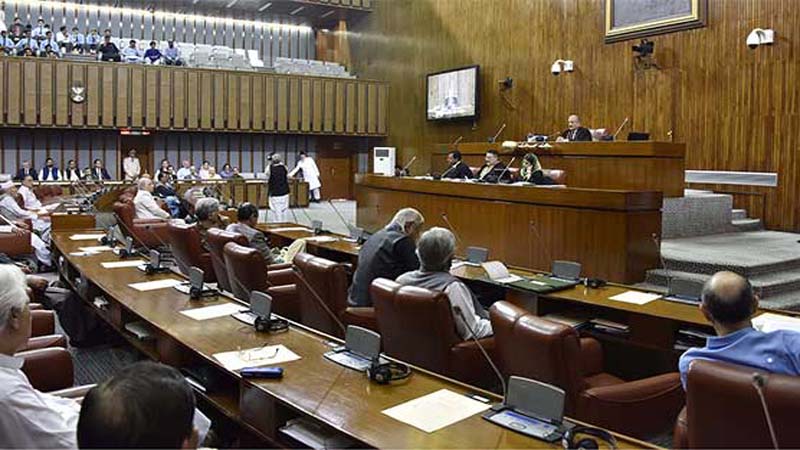 ISLAMABAD: The Senate was unable to pass the 24th Constitutional Amendment Bill, 2017, on Wednesday as the government, which apparently failed to garner support from the opposition parties, refrained from presenting the bill in the Upper House for a third consecutive sitting.

The crucial legislation will allow the conduct of delimitation of constituencies on the basis of provisional census results and has already been passed by the National Assembly earlier this month.

The Senate had been unable to pass the bill on November 17, as several legislators remained absent from the session on that day. Only 58 of the 104 senators had attended the session.

However, the voting on the bill was deferred until Friday.

Expressing his concern, Rabbani said that elections must be held on time and requested both the leaders to play their role in making it possible. “The bill is meant to pave the way for timely conduct of the 2018 general election,” he said.

Aitzaz Ahsan said, “Only a few days have gone by, not months,” adding that soon the bill would be passed. Talking to the media following his meeting with the chairman, he said that negotiations for the approval of the bill were still ongoing. “A final decision is yet to be reached on the matter,” he added.

“The Pakistan People’s Party (PPP) should be asked why it has opposed the bill,” Senator Zafarul Haq said while talking to the media.

“Negotiations with the PPP are ongoing,” he said, adding that he was not aware what conditions the party had set. Earlier, the proceeding of the Upper House of parliament remained halted when JUI-F lawmaker Hafiz Hamdullah protested on the floor of the House demanding the chair to allow him to speak on a matter of public importance.

However, Rabbani told him to speak after concluding an adjournment motion.

During the debate on an adjournment motion, he sought the permission of the chair to speak on the delay in passage of constitutional amendment from the Senate.