“To counter the anti-league elements and rhetoric, Muslim League relied on both extremist and moderate strands of Muslim nationalism in its campaign for 1946 elections,” said writer Nadeem Farooq Paracha on Saturday. He was speaking at a session on his recently published book ‘The Pakistan Anti-Hero’.

In urban Punjab, an inclusive version of Muslim nationalism was touted, but in rural areas of the same province, the League turned to powerful landlords to gain votes.

The talk was moderated by Yaqoob Khan Bangash.

Paracha said 1946 elections had set the wheels in motion in the tussle between extremist and moderate strands. Had Jinnah been lucky enough to live longer, Pakistan would have been a completely different country, he said.

‘Though many are criticising the project, I feel the CPEC can finally act as a catalyst for reforms and a shift from the intolerant narrative to the moderate and inclusive one’

“The two strands became directly embroiled in a tussle to dominate what began evolving as Pakistani nationalism from 1947 onwards. The modernist strand dominated the country’s nationalist narrative till about the mid-70s. But it was finally overwhelmed by the other strand.”

Paracha went on to say that as a nation we needed to rediscover the very concept of Pakistani nationalism. The new generation has grown up with a “distorted and myopic” understanding of it. The early ideas of nationalism were more “inclusive and open-ended and could have evolved into something far more progressive,” he argued. Due to the 1971 East Pakistan debacle, its evolution was retarded and from the mid-1970s the whole concept of nationalism in Pakistan became “very narrow”. This was no longer the nationalism envisioned by the founders of the country.

The veteran journalist added that despite efforts by military dictator Pervez Musharaf, the country could not succeed in getting rid of the extremist narrative. “Musharraf did it in a very silly manner. The modernist narrative had already died and the international developments were not favourable either.”

Responding to a question, Paracha said that the China Pakistan Economic Corridor (CPEC) will bring significant shifts and changes in the cultural ethos of Pakistan. He said that the state will have to crackdown on the extremist elements in order to benefit from the Chinese investment.

He added that the government and state of Pakistan will have to initiate some drastic shifts and changes in the prevailing cultural milieu and ethos to fully benefit from CPEC. 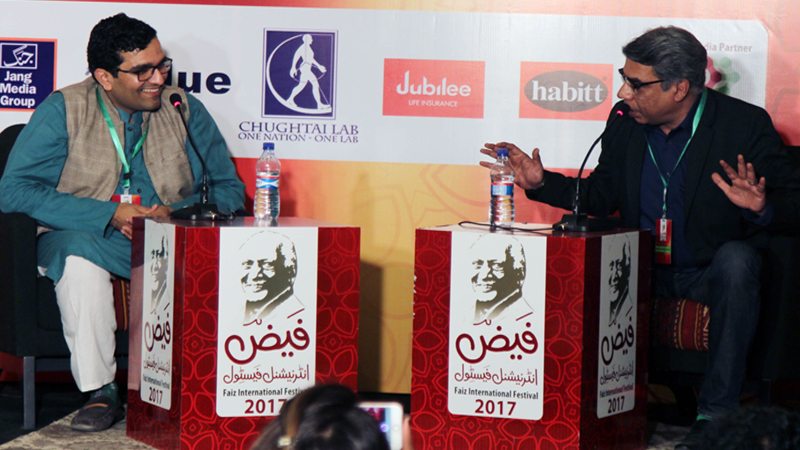 “Though many are criticising the project, I feel the CPEC can finally act as catalyst for reforms and a shift from the intolerant narrative to the moderate and inclusive one,” he remarked, adding the project will fail if state surrenders to the extremist elements.

While agreeing that the debate for an alternative narrative has already begun, the veteran journalist commented that even the new political parties have been using myopic and outdated ideologies and narratives. “The political and cultural environment has been inimical to the progress and development of political parties. The frequent military interventions marred their development.”

He added that each of the two major narratives had overtime tied up with political and economic interests of the elites, which made it difficult for the latter to support any alternative narrative. Thus, the shift in the narrative was also linked to the materialistic interests of the state.

Talking about the history of the left-wing in Pakistan, Paracha said that the left had remained an elitist section of the society. “The left-wing in Pakistan is a joke. After the creation of Pakistan, the left leaning parties have largely failed to integrate in the society. The League absorbed all the leftists, but yet, after the creation of Pakistan, the founding party saw several factions within it.”

Paracha said that contrary to common misconception, Pakistan People’s Party was also not a leftist organisation. “It only propagated a few chunks of the leftist ideology and gave the idea of modern Muslim to people,” he remarked.

In response to a question that concluded the session, Paracha said that due to extreme paranoia and sense of insecurity, majority of the people in the country had resorted to conspiracy theories to justify their existence and the flawed makeup of identity. “Insecurities give birth to conspiracy theories. People use them to pacify themselves.”