Printed on fine paper and fully proof-read literary magazine Kaghazi Paerahen is the forte of writer cum critic and Editor Shahid Shaidai. The editorial of the September-October 2017 issue is a bit bitter in terms of its contents and quite different from the personality that Shahid Shaidai carries. He complains that the two groups of literary people running their respective Halqa-e-Arbab-e-Zauq, Lahore were brought together after great efforts of some members from both sides which ended up in Halqa becoming one entity. Its sessions started getting held on a regular basis in Pak Tea House, as per demand of one group. Resultantly, the other group had to sacrifice the spacious venue of Aiwan-e-Iqbal where their sessions used to be held. With due respect to the historical background of Pak Tea House, its first floor gets congested for a full session and in summers it gets suffocated. It is the same place where Aamir Faraz, the Secretary of the first group sat in the front row on the road for Halqa’s session when Pak Tea House was closed. He restarted the magazine of Halqa named “Nai Tehreerain” and published it thrice in his tenure. He organized sessions on different forms of art other than just literature. Later, Shahid Shaidai, Hafeez Tahir and Hussain Majrooh carried out the duties of Halqa as its Secretary diligently. In the latter’s tenure, the attendees exceeded figures of hundreds every Sunday. The second group held its sessions with Dr. Amjad Tufail, Farhat Abbas Shah and Dr. Ghafir Shahzad and alike, all respectable names expeditiously till the groups combined. 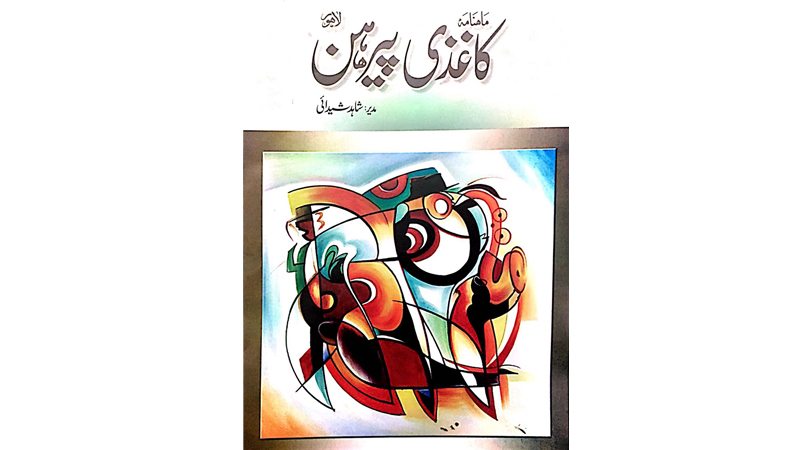 Shahid Shaidai felt unhappy that another dissident group had created another Halqa despite the unification and held their sessions at Pak Tea House on a different day than Sunday. Politics in Halqa is not a new phenomenon; men of letters used to undertake useless actions against each other in the past as well. It may have been a clash of ideology or something else but it is not healthy for literature and art. Writers, critics and poets should show unity to the nation, especially to the younger generation who look up to them as their mentors. It is a dire need of the present geo-political situation that has engulfed Pakistan presently. Weekly reports as documented in an excellent manner during Shahid Shaidai’s tenure of Halqa’s proceedings should come in book form at the end of each year as there is no documentation of history of Halqa after 1999.

The second issue touched upon by the editor is that senior writers still entangled themselves in rivalries. In a submission titled ‘Chand Tuhmatein Apne Zimmey Dhar Chale’ the editor mentions of senior poet Zafar Iqbal mentioning of a column written by Imran Bhinder accusing Dr. Wazir Agha of plagiarism. The same author had belittled Ghalib and Iqbal calling them dead and appreciating only Faiz Ahmad Faiz, forgetting that all three names played great role in literature in their respective times. The juniors take inspiration from their seniors. In reference to this, the editor has quoted Faiz’s couplet ‘Mata-e-Lowh-o-Qalam Chin Gai Tau Kaya Ghum Hei/Keh Khoon-e-Dil Main Duboi Hain Ungalian Hum Nei’ from Ghalib’s couplet ‘Haal-e-Dil Likhun Kab Tak Jaun Unko Dikhlaun/Ungalian Figaar Apni, Khama Khoon Chakaan Apna’. Ultimately, therefore, we should stop maligning the dead who have left great legacy of literature for us.

Referring to Wazir Agha’s long poem ‘Alaao’ said in 1983, the author Dr. Hameed Sarmad observes that this poem has universal connotations. He adds that in writing a short poem, transfer of thought process into a creative endeavor is relatively easy. In a long poem, creativity is difficult as many layers of meanings have to be absorbed in it. (Page 5)

‘Inshaiya’ is a terminology used for expanding on one theme as compared to the other. It is that form of literature where the writer keeps on writing without any hesitation. It has to encompass brevity of a ghazal, strong thought content of criticism and relishing of an Afsana (short story). Inshaiya ‘Kutch Zarb ul Misl Ki Mukhalifat Main’ (something against the figure of speech) surrounds around the expression ‘Baat Puhunchi Teri Jawani Tak’ (matter relating to your formative years) linking ‘Jawani’ with Qayamat (the Day of Judgment) – Page 09). The link is established with ‘Naseehat’ (advice) of the elders etc. Thus figurative expression is said to be created by somebody we are not aware of like a folk song. So in ‘Inshaiya’ one leads from one conversation to the other in a lighter vein. It has to engulf s subtle sense of humour not to make it monotonous. Dr. Anwar Sadeed’s Inshaiya ‘Foot Note’, Munawar Usmani’s Inshaiya ‘Apne Baare Main’ (about me), Khaild Siddiqui’s ‘Tarbiat’ (grooming) and Saleem Agha Qizilbash’s ‘Dil Muqabila Damagh’ (heart verses brain) (Page 22) has these ingredients.

Apart from short stories by Mahmud Qazi, Shaheen Abbas, Raashid Javed Ahmad and Mudassar Basheer, there are separate sections of Ghazals and Nazms. Music has been covered by an exhaustive article on Madam Nurjehan by Anjum Shirazi (Page 37). Anjum Shirazi is a Ghazal singer and a member of Halqa. Here is an excerpt from the book ‘Melody Singers 1’, on Malika-e-Taranum Nurjehan’s birth: “Cool breeze had started blowing in the gas lamps on roads of Kasur city but streets and habitats were dark. It was a night of September 21, 1926. Those were the days when people retired early for bed. In a small house in Kot Murad, Kasur, Mian Saheb (Madad Ali) took out match box and lit a lamp. Call for Isha prayers were in the air. Main Sahib was wondering as to when Ellahi Jan would bring ‘Issaan’, the ‘Dalai’ (child delivery nurse) with her! Main Saheb had dispatched two sons and a daughter elsewhere as a new arrival was in the offing. Poverty stricken house had no milk or sugar. All Main Saheb could do was to pray hard. Half an hour later Issaan who had appeared earlier informed that a girl was born to Mian Saheb and Fateh Bibi. Two seers of wheat and one seer of Gur (raw sugar) was all the nurse was content with as her payment. Maternal Aunt Ellahi Jaan, a reasonable good singer of that time, put a little sugar in the newborn’s mouth as ‘Gurti’ (first food for the newborn). It is believed that a person who gives ‘Gurti’ to the baby also transmits her/his qualities in the newborn. She commented to her brother that the way the child cried meant she would be a good singer one day. Perhaps the ‘Gurti’ of her paternal aunt much later made Allah Wasaai, Nurjehan of the millennium.

The following day Ustad Ghulam Muhammad, a well-known classical singer of the city (who stuck to Nurjehan till her death), caressed the baby on her head and prophesied that the baby would one day make her parents proud. Even when baby’s hair (Jhand) was removed after forty days, her crying was stated to be in tune. Allah Wasai’s father offered Ustad Ghulam Muhammad to raise her at the latter’s house but he was too poor to accept that offer. However he started teaching her music and at the age of seven she could render ‘Sargam’ with ease. He instructed her in the traditions of the Patiala Gharana of Indian music with special emphasis on the classical forms of thumri, dhrupad, and kheyal forms of singing”.