As apparent as the US-India affability might seem, an analysis of Trump’s behaviour and the contradictions in his choices make any alliance with the US during his presidency seem very fragile 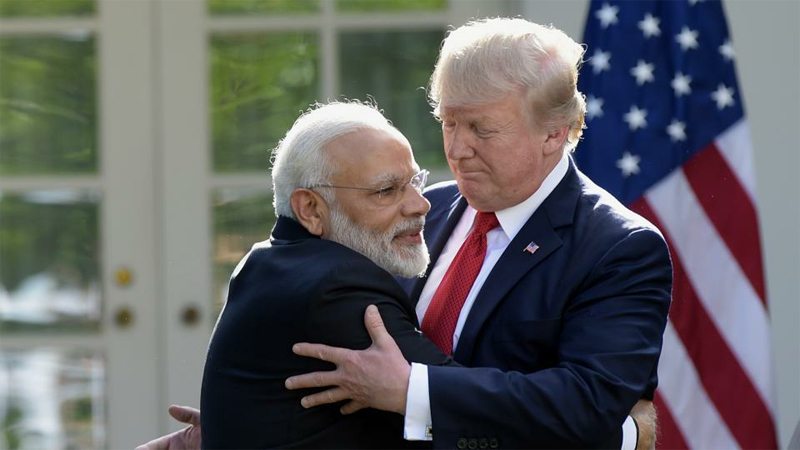 Trump seems to have chosen his preferred partner in South Asia. The bonhomie appears to have had a lasting effect. US-India relations are said to have entered a new unfermented era. The question, however, is: can Indo-US bilateral ties withstand Modi’s brashness and Trump’s inconsistent behaviour? Many in India are ecstatic over the fact that the United States and India now seem to have forged an all-weather friendship. Here’s what they might want to consider.

As apparent as the US-India affability might seem, an analysis of Trump’s behaviour and the contradictions in his choices make any alliance made with the US during his presidency seem very fragile.Between 1999 and 2012, Trump switched as a voter between Democratic, Republican, and independent seven times. Trump’s foundation provided 100,000 dollars to the Clinton Foundation, once contributed 4,700 dollars to Hilary Clinton’s senatorial election campaign. In addition, Trump’s foreign policy contradictions with regards to Iran, ISIS, Russia, among others, are not exactly a secret.

The US’ latest outreach to India is all about containing China. If you take China out of the equation, then the ‘natural alliance’ between India and the United States might fall flat. That’s what you call a transactional relationship. Also, it appears as if the US is not willing to elevate India to the status of closest ally either. When India tested its submarine-launched ballistic missile (SLBM) K-4 in March 2016, the US criticised India over the successful missile launch. You just don’t criticise your ‘natural ally’ for pursuing its nuclear ambitions. Do you?

Consider this, under Prime Minister Modi, India’s ranking has slipped in the Global Hunger Index. According to the latest numbers, India is placed below countries like North Korea, Mali, and Burkina Faso.

Above all, virulent rhetoric from Modi, his aide Amit Shah and their handpicked UP Chief Minister Yogi Adityanath does not bode well for India. Prominent figures in India have recently started speaking against the hate these people spew. Systematic killings of modern, progressive, and critical thinkers such as Malleshappa Madivalappa Kalburgi, Govind Pansare and Narendra Dabholkar in recent times have brought India’s tryst with far-right politics to the fore. With the recent murder of Gauri Lankesh, an editor and writer, it seems as if the room for independent and rational voices in India is continually shrinking with every passing day.

The US’ latest outreach to India is all about containing China. If you take China out of the equation, then the ‘natural alliance’ between India and the United States might fall flat. That’s what you call a transactional relationship

India should look to focus inwards rather than contemplating teaming up with the US to counter China and, to a lesser extent, Pakistan. That’s because all of this is based on conventional warfare patterns. India might not benefit by over-thinking the Pakistan-China two-way conventional attack. It’s highly unlikely that China and Pakistan are simultaneously going to attack India in a conventional full-scale manoeuvre. William S. Lind explained the Fourth Generation of Modern Warfare in 1989, but the leaders in South Asia are still stuck, and somewhat obsessed, with older patterns of warfare.

Two-way containment is a classic conventional warfare technique, but the patterns have now evolved into non-conventional. Now with the advent of the 5th Generation of modern warfare, martial techniques call for state-alliances that are coupled with internal state security. This is because the enemy now lies within, not without.

If India aims at becoming a great modern-day democracy, then Modi must refrain from appeasing his domestic far-right political base. The Hindu reported on October 14 that the Uttar Pradesh Police had arrested one, and booked 22 others, for publicly equating Modi with the North Korean leader via hoardings and posters.

During the past few days, US Secretary of State Rex Tillerson might have discussed several ideas with Indian leaders to bolster India-US ties. But, with Trump at the helm and Modi’s inclination towards the far-right, India’s latest jump on the US bandwagon might not help them much.