There’s a reason why Putin termed the visit as a ‘landmark event.’  There were too many deals on offer. There was money on the table.

History is made. A reigning Saudi monarch finally stepped foot on the Russian soil. When Saudi Arabia’s King Salman bin Abdul Aziz Al Saud landed at Moscow’s Vnukovo Airport on October 4, it was a sight to behold. Russian deputy prime minister Dmitry Rogozin was there to receive the King. Barring the faulty golden escalator, a guard of honour for the King, and the presence of the Preobrazhensky military orchestra would surely have felt good.

The trip was initially talked about in 2015 when Saudi Arabia’s then Crown Prince Mohammed bin Salman visited Russia. During that meeting, Russian President Vladimir Putin officially invited the Saudi King, and while it took over two years for the visit to materialise isn’t difficult to decipher. Of all the divergent views on issues related to the Middle East including Yemen, Syria, Gulf Cooperation Council (GCC), oil etc; Iran it was. And, unsurprisingly, Iran it is. King Salman didn’t try obscuring that either. Upon his arrival in Russia, he vouched for better relations with Kremlin, but made it clear that Iran, a major Russian ally, needs to stop meddling in the Middle Eastern affairs.

It’s intriguing to note that the Union of Soviet Socialist Republics (USSR) was the first country to recognise the Saudi Kingdom (limited to Hejaz) in 1926. But that bonhomie didn’t last long enough, and the bilateral relationship between the two countries broke off in 1938.

There’s a reason why Putin termed the visit as a ‘landmark event.’ There were too many deals on offer. There was money on the table. And, there’s, still, just too much to play with. But, remember: there’s history and Chechen terror groups to go along with that as well. Does anyone remember the terrorists going berserk in Russia ahead of the Winter Olympics in Sochi in2014? I’m sure Bandar bin Sultan Al Saud, the former Saudi Arabia intelligence chief, wouldn’t have forgotten that one bit.

Don’t pin too much hopes on King Salman’s Moscow visit. It isn’t likely to break the ice

A $3billion arms deal might be luring enough for Putin to change his views on everything related to Chechen groups and the Middle East. After all, carving out a deal to sell the S-400, Russia’s most-advanced air defense missile system, to the Saudis is, by no means, an ordinary feat. But, if you think that’s how it’s going to pan out, then it just can’t get more delusional than that.

The US signed multibillion-dollar deals with Saudi Arabia earlier this year. Soon after the S-400 deal was announced, Pentagon was quick enough to approve a $15billion deal for the sale of Terminal High Altitude Area Defense (THAAD) air defense systems to the Saudis. The Saudi King must’ve been quite happy, but he must be reminded that he just can’t keep the cake, and eat it too. The Saudis can’t, and shouldn’t, expect both the US. and Russia to be there for the Kingdom, and bail it out when needed. 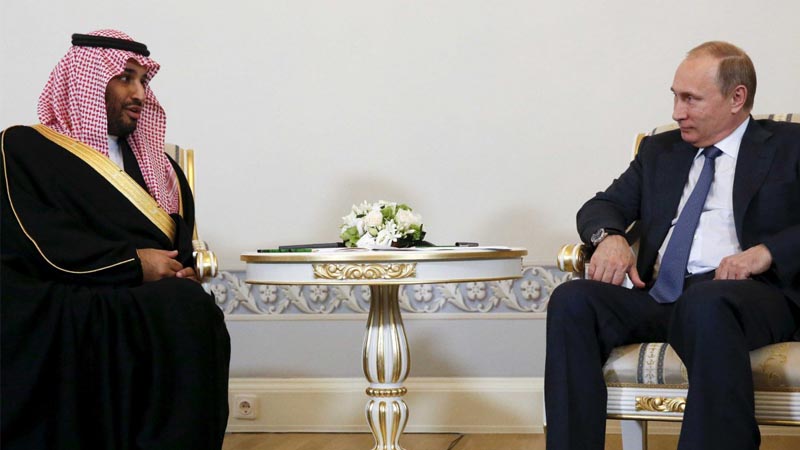 Then there’s Saudi economy to deal with as well. An economy that relies mostly on oil. Although, of late, KSA has cut down on oil exports gleefully, but, if persisted with that’s likely to provide space for other players to fill. A scenario the Saudis wouldn’t even be comfortable thinking about. On top of that, America has been actively engaged in harnessing its shale resources. Where does Russia fit in all of this? It’s not an OPEC member state, but it’ll ideally want the oil prices to remain high. Can you now gauge why Russia has performed all the diplomatic tricks to make the Saudi contingent feel good about the trip. Butthen again, considering the US-Saudi relationship and the state of affairs in the Middle East, Russia and Saudi Arabia might actually be fighting for the cherry (oil prices) rather than agreeing to a solution.

Then, there’s this. Saudi Arabia promised to invest $10billion in Russia in 2015. Unfortunately (fortunately for some), out of all this, only $1billion is the total amount that’s been materialised. Can the Saudi Kingdom afford to bypass its relationship with the US? No. Will it try maneuvering between the US and Russia? It will, but as enunciated above, there isn’t much breathing space, anyway.

Don’t pin too much hopes on King Salman’s Moscow visit. It isn’t likely to break the ice.