Poetry-based travelogue of the northern areas 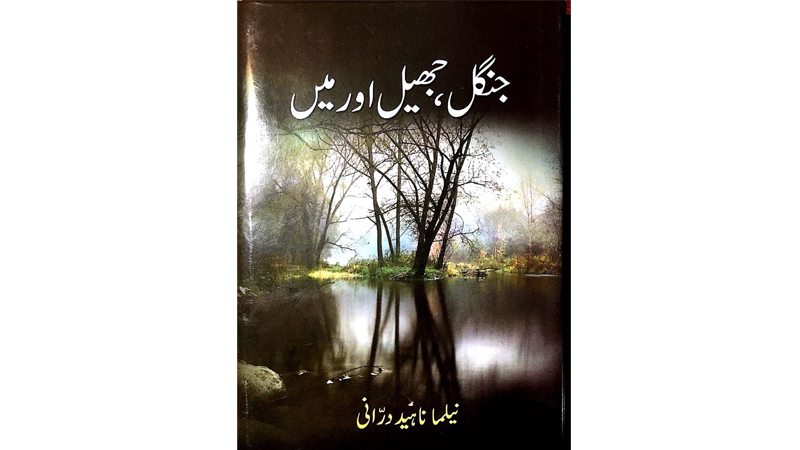 Just the title of the poetry book Jungle, Jheel Aur Main by Neelma Naheed Durrani reminds me of the beautiful places set in rocky mountains of Alberta, Canada where in the midst of mountains full of trees and wild life, one suddenly opens up to Lake Moraine, Lake Louis, Lake Minnewanka, Bow Lake, Two Jack Lake – National Banff Park etc.

I was lucky to have travelled all this area in 2015 and 2017. We, in Pakistan have similar beauties in Hunza in the northern area. Situated to the extreme north of Pakistan, Hunza valley is a place worth visiting. Apart from providing breathtaking view of tall mountains like Rakaposhi, Hunza Peak, Ultar, Ghenta and ladyfinger peak among many others, Hunza valley is home to a watch tower in Garnish village, Altit Fort and Baltit Fort. Also, located are some lakes, especially Attabad and Borith Lakes in Hunza Pakistan which will leave you in wonderment. In these scenarios Jungles and Lakes were the gift of God and ‘Main’ part was lucky me. I don’t know if Neelma has been to these places or not but I know for sure that she is a wide traveller and has spent considerable time in Sweden. It must have been on visits to exotic places with natural beauty that she came out with poetry written in this book. Such experiences also justify the title of the book under review.

One such piece of poetry is a ghazal ‘Neeli Ankhon Main Bolta Pani/Bheegi Banhon Main Bolta Pani/Ik Ajab Sei Saroor Main Gum Tha/Chaand Lehron Main Gholta Paani’ (Water spoke in blue eyes and in wet arms. Moon was intoxicated when it created ripples in the water) which must have dawned upon Neelma while in the surroundings of forests and lakes. Neelma is smitten by the insincerity of the beloved when she says ‘Koi Mausam Woh Suhana Nahi Hone Daita/Woh Mujhe Khud Sei Begana Nahi Hone Daita’ (He never lets me enjoy the weather and at the same time he does not let me get away from me – Page 29). In this frame of mind even the best of natural beauty bites you hard. One of the reasons of she becoming unhappy is when she is bewildered by her beloved’s beliefs. She says ‘Humain Vehm-o-Gumaan Bhi Nahi Tha/Tere Afkaar Nei Chaunka Diya Tha’ (I woke up from my dreams when I heard your point of views).

Those who live permanently in snow clad areas have to live with its affiliated tyrannies; using spades to clean the drive ways, driving only on the snow cleared pathways and roads, covering all your bodies and faces etc. For example, this year in the winters, the colour of the snow, rusty white with patches of dirt, matched that of the sanitation trucks that brought it to the mounting pile in the center of a New York City Financial District block

Watching snowfall in an exotic experience if this experience happens occasionally in your life time. One can play by hitting each other with snow balls etc. One can see such scenes in Murree hills during winters. Those who live permanently in snow clad countries have to live with its affiliated tyrannies; using spades to clean the drive ways, driving only on the snow cleared pathways and roads, covering all your bodies and faces etc. Even going out for groceries is a tension. For example this year in the winters, the colour of the snow, rusty white with patches of dirt, matched that of the sanitation trucks that brought it to the mounting pile in the center of a New York City Financial District block. Workers from the towering office buildings nearby who were on a smoke break gazed at the story-high pile and rumbling tractors that were shoveling it. Because of the historic snowfall in Boston in 2015 which surpassed 100 inches, plows cleared a total of about 312,000 miles of city streets, the equivalent of driving from Boston to San Francisco 100 times. Looming piles of cleared snow reached over eight feet tall, squeezing two-lane streets into one and leaving little room for pedestrians. The city found itself with “snow farms,” the depositories for removed snow, which had climbed to worrying heights. In such situations where the dwellers are forced to stay indoors, Neelma has come out with excellent pieces of poetry, probably while in Sweden. She says ‘Barf Takra Rahi Hei Sheeshe Sei/Yaad Ik Aa Rahi Hei Sheeshe Sei’ (snow hits the window pane reviving somebody’s memory). Ghazal on Page 37 depicts the agony kindled by the snow clad scenery outside the dwelling. Neelma says ‘Barf Ki Chaadar Pehn Kei Subho Aai Hei/Pichli Raat Ki Saari Yaadain Laai Hei/Jheel Nei Pehne Saare Gehne Chaandi Kei/Sooraj Kei Mukhre Pei Zardi Chaai Hei’ – Page 37 (Morning appeared with a sheet of snow kindling the memories of the previous night. The lake it seems has worn all jewelry made of silver making the sun look pale).

The colour predominant in Neelma’s poetry is that of melancholy love. That brings me to Ode by John Keats “No, no, go not to Lethe, neither twist/Wolf’s-bane, tight-rooted, for its poisonous wine/Nor suffer thy pale forehead to be kiss’d/By nightshade, ruby grape of Proserpine/Make not your rosary of yew-berries/Nor let the beetle, nor the death-moth be/Your mournful Psyche, nor the downy owl/A partner in your sorrow’s mysteries/For shade to shade will come too drowsily/And drown the wakeful anguish of the soul/But when the melancholy fit shall fall/Sudden from heaven like a weeping cloud/That fosters the droop-headed flowers all/And hides the green hill in an April shroud/Then glut thy sorrow on a morning rose/Or on the rainbow of the salt sand-wave/Or on the wealth of globed peonies/Or if thy mistress some rich anger shows/ Imprison her soft hand, and let her rave/And feed deep, deep upon her peerless eyes/She dwells with Beauty-Beauty that must die/And Joy, whose hand is ever at his lips/Bidding adieu; and aching Pleasure nigh/Turning to poison while the bee-mouth sips/Ay, in the very temple of Delight/Veil’d Melancholy has her Sovran shrine/Though seen of none save him whose strenuous tongue/Can burst Joy’s grape against his palate fine/His soul shalt taste the sadness of her might/And be among her cloudy trophies hung.

From the above analysis one can decipher simple diction, vocabulary with which Neelma says her poetry on variety of themes.