Mastermind — power, politics and the guru from Taxila

From head to toe, his blood boiled with anger. He ran into the woods. There, he saw a young Brahman draped in a white sheet 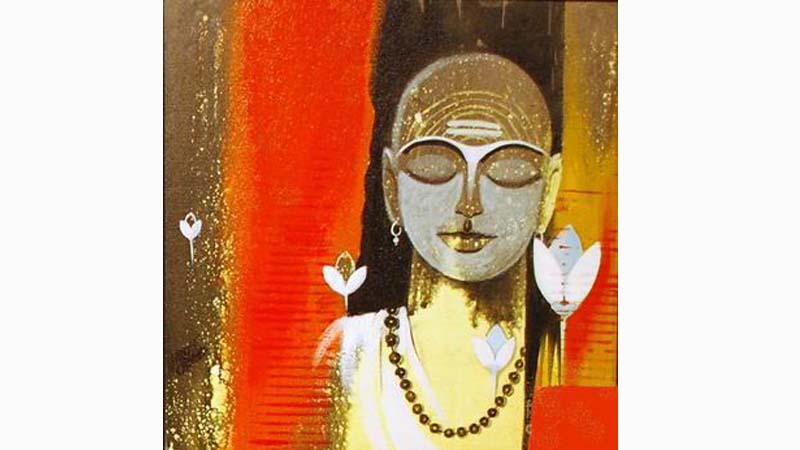 He wanted to stretch his wings and nestle on the peak of glory. He was born on earth but his desires touched the blanket of sky. Freedom was his basic right, but he couldn’t breathe freely in his native land. A monarch whose sole objective was to accumulate wealth ruled him, and he could not obey a greedy ruler any longer. His ambition wouldn’t allow him to. So he disobeyed the King and got suspended from the army.

From head to toe, his blood boiled with anger. He ran into the woods.

There, he saw a young Brahman man draped in an unstitched white sheet. In the middle of his baldhead grew a ponytail of dark black hair. His forehead had three parallel white lines with a red dot in the centre. He was pouring sugar-water into the roots of grass. The furious man inquired the Brahman with surprise, “What are you doing?”

“This grass hurts my feet. So I want to destroy it,” replied the Brahman. “I will fill its roots with this sweat water; then an army of ants will attack it, eating away its roots and destroying it forever.” The conversation was still on when a train of ants reached their destination and the grass began to dry up. The man bowed his head before the Brahman and requested him to be his teacher and adviser.

That Brahman was Kautilya Chankaya and his disciple, the man who disobeyed his king, was Chandragupta Maurya. The same man, Raja Nanda, wronged both of them. The king refused the services of Chankaya as advisor, and failed to reward Chandragupta in equal measure to his services. In response, the teacher-student duo joined their wisdom and robustness and rebelled against the Nanda Empire.

Their partnership brought fruitful results and they succeeded in establishing what we now know as the mighty Maurya Empire. Ashoka, one of the most influential rulers of ancient India, was the grandson of Chandragupta Maurya. He also followed the principles of governance laid out by Chankaya.

That Brahman was Kautilya Chankaya and his disciple, the man who disobeyed his king, was Chandragupta Maurya. The same man, Raja Nanda, wronged both of them. The king refused the services of Chankaya as advisor and failed to reward Chandragupta in equal measure to his services. In response, the teacher-student duo joined their wisdom and robustness and rebelled against the Nanda Empire

Kautilya Chankaya was a contemporary of Aristotle. About twenty-three hundred years ago he wrote The Arthasastra (The Science of Politics), which remains the oldest and one of the most exhaustive treatises on the governance and administration of a state.

Its discovery was a miracle in itself. In 1905, a man from Tanjore came to visit Doctor R Shamashastry, the librarian of Government Oriental Library, and gave him a manuscript of Arthshastra, which was written on dried palm leaves. It was after this that Dr Shamashastry started hunting the manuscripts of Arthshastra from different regions of India and his search took him to Germany. There he found a copy of Arthshastra in Sanskrit. He compared his own manuscript with that copy and then, for the first time, translated this masterpiece into English. This 1915 translation of the book brought international fame to India.

Today, if you ask a Pakistani student of philosophy or political science about Aristotle, he will give you a detailed account of the Greek philosopher. He will tell you about concepts like “organic whole”, and the Aristotelian principles of classification. He will tell you the story of this man who lived on another continent, but will seal his lips as soon as you ask him about Chankaya. He would know next to nothing about the Brahman who spent his entire life in Taxila, is known as the ‘Guru of Hindu Politicians’ and whose wisdom has been acknowledged in Burma, Tibet, Thailand, Indonesia and India. It is a dilemma of our society that we know more about ‘others’ than we do about ‘ourselves’.

Pakistani historian Muhammad Ismail Zabeeh once said, “When I started my research on Arthasastra, I couldn’t find a single copy in any university or public library of Pakistan, from Peshawar to Karachi. Everywhere I received the same excuse, ‘Alas! The book has been stolen’.” Later, he found a copy of this book from the private library of a friend.

This is how Pakistan treated Chankaya. The contrast with India could not be more striking. To pay homage to this sage, Jawaharlal Nehru in 1950 established a diplomatic enclave in New Delhi and named it Chankayapuri (The City of Chankaya).

It is a wonderful aspect of Arthasastra that 2,300 years ago, Chankaya gave a detailed account of the principles of public administration, foreign policy, and defence policy against strong and weak nations, control on economy, basic rights of the people and all other affairs of a state. His success lies in the fact that he not only narrates these principles but also practiced them in the Maurya Empire. He served as the chief advisor to both Chandragupta and his son Bindusara.

For Chankaya, verbal injury to a common man was a crime. He includes defamation, vilification and threats in the definition of verbal injury, and sanctions penalties for different categories of this crime. This may seem like a very minute example but it has a lot to offer. This shows how important ethics were for Chankaya and how important these little things are for a society. Today, we only think and legislate about physical injury; Chankaya considered both physical and non-physical aspects important.

About foreign policy he says there are six measures of foreign policy: peace, wars, staying quiet, marching, seeking shelter and dual policy. Among them, entering into a treaty is peace; doing injury is war; remaining indifferent is quiet; augmentation of power is marching; submitting to another is seeking shelter; restoring to peace with one and war with another is dual policy.

When in decline as compared to the enemy, the ruler should make peace. When prospering, he should make war. When in no position to harm the enemy, and be harmed by it, he should stay quiet. When possessed of a preponderance of excellent qualities, he should march. When wanting in power, he should seek shelter. In a goal that can be achieved with the help of an associate, he should resort to dual policy.

His foreign policy undoubtedly emphasises self-advancement. We can even trace in his work the idea of Balance of Power between two states. In this, his principles are more elaborative than Machiavelli’s The Prince. He talked about a wider range of subjects, from character building of an individual to the precautions to be taken by a king. Overall, Arthasastra is a remarkable book and the wisdom of Chankaya cannot be dismissed or ignored. In the fields of politics, diplomacy and military studies, this ancient Indian writer has a lot to offer.