A complex but well-written narrative of personal stories

The novel starts on a worrying note, familiar to all Pakistanis traveling abroad, “Isma was going to miss her flight.” Isma Pasha is a British Muslim who is on her way to Amherst, Massachusetts, USA to enroll in a PhD programme in sociology. She is leaving England at a time when authorities are worried about a massive exodus of Muslims going to join ISIS and, at the airport, she has gone through an endless security clearance which included many insulting questions.

“Do you consider yourself British?’’ the man asked.‘’ I am British.’’

“But do you consider yourself British?”

Then he wanted to know her thoughts on Shias, homosexuals, the Queen, democracy, The Great British Bake Off, the invasion of Iraq, Israel, suicide bombers, dating websites. On and on.

The story revolves around two British Muslim families who have Pakistani roots but now live in London. The first family of three English-born siblings, Isma, Aneeka and Pervez Pasha, live in the humble suburb of Wembley. Their father, Adil Pasha, like Antigone’s father, Oedipus, is a ‘missing figure’. He has lived a disgraceful life as a jihadist and probably died in Guantanamo. The brother now joined an ISIS media cell, as a mediocre echelon to recruit Jihadi brides in Raqqa, Syria. Like Antigone, his sister Aneeka wants to salvage the family.

In the second family, Karamat Lone, his Irish wife Terry and son Eamonn live in luxurious West London. Karamat is a newly appointed Home Secretary and known for his contempt and criticism of traditional Muslims who do not assimilate into British culture.

Isma, who wears a head scarf and prays regularly, met Eamonn in a café in Amhurst. “The turban. Is that a style thing or a Muslim thing?”, he said.

Laughingly, he said, ‘’ Cancer or Islam— which is the greater affliction?” She later called his father “sellout, coconut, opportunist, traitor.”

All the characters are well developed with a strong identity, and their encounters are often intense, dramatic and unsettling. Shamsie has dedicated a chapter in the novel to important characters where readers get to know them better

Later, Eamonn meets Aneeka who is 19 and has a scholarship to study law at LSE. They fall in love, or at least Eamonn thinks they are in love until Aneeka tells him that her twin brother Pervaiz has joined the ranks of ISIS. She wanted home secretary Karamat Lone’s influence to get a pardon for her brother who was ready to come back to England. Although the story involves a young boy who joined ISIS, the narrative is about family, love, sacrifice, identity and politics. “The ones we love… are the enemies of the state.” Finally,
the epigraph of Antigone is revealed
in the story.

The novel is a complex but well-written narrative of personal stories that get intertwined with religious, political and social conflicts of Muslims living in England in the age of international Jihad. When Pervaiz is identified as a terrorist, the British press isolates him by calling him a British Pakistani terrorist or British Islamic terrorist. This was intended to show the vast distance between being British and a terrorist. All the characters are well developed with a strong identity, and their encounters are often intense, dramatic and unsettling. Shamsie has dedicated a chapter in the novel to important characters where readers get to know them better.

Recently Shamsie visited the United States for the promotion of the novel. At a book reading at a book store, Politics and Prose, in Washington DC, she expressed that in the age of surveillance, as a naturalised British citizen, she was careful about online browsing on the subject of international Jihad for this novel. She was concerned that her surfing to get information might wrongfully lead authorities to think that she had been radicalised. “Whenever I searched about ISIS recruitment I also searched about pop culture as well to mitigate the risk of being on the radar.” she told. 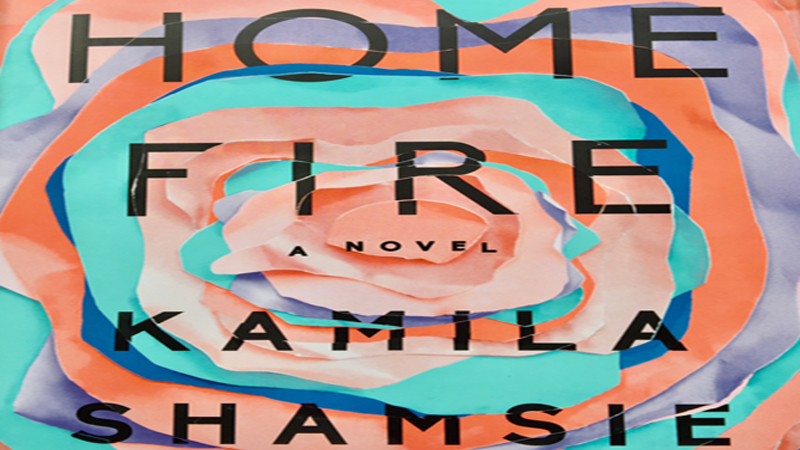 Home Fire is a real page-turner with an absorbing story which takes a few shocking turns, all leading to an epic ending. Dwight Garner of the New York Times wrote, “Home Fire builds to one of the most memorable final scenes I’ve read in a novel this century.” The family drama unfolds on international television and the shock waves could be felt across the continents. “Home Fire” has found a well deserved spot on this year’s long-list of The Man Booker Prize list.

The writer can be reached at MuhammadHassan.Majeed@hhchealth.org