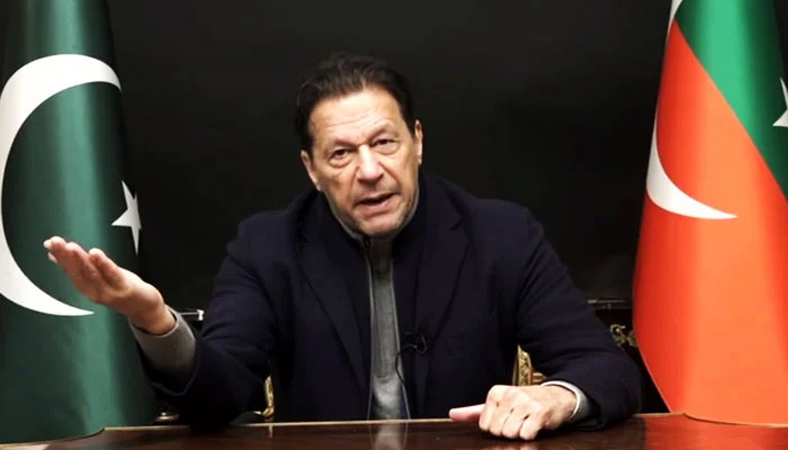 Pakistan Tehreek-e-Insaf (PTI) Chairman Imran Khan on Friday insisted that the economic crises facing the country is not natural but deliberately manufactured”.

“Due to the decision of one person, the PTI-led government was toppled and the crisis started,” the former prime minister said while addressing the “Rule of Law” conference via video link on Friday. “One person decided to change the [PTI] regime and hatched a conspiracy,” he continued. The coalition government, he said, has failed to tackle the economic crisis as “it does not have any plan” to restore the economy”.

The PTI chief said that never in the country’s history had Pakistan faced a worse economic crisis than the one it “faces these days”. “Everyone [in the government] is hoping to get money from Saudi Arabia and China,” Khan said, adding that the rulers, in Geneva, requested the international community to provide them funds in connection with the devastation by the environmental changes.

Referring to the deepening economic crisis, Khan said the country’s reserves had fallen to a historic low. “We do not have money to open the Letters of Credits (LCs). No one is ready to give funds to Pakistan,” he further said.

Until the 90s, Pakistan’s economic indicators remained largely positive in the Subcontinent, the PTI leader said, adding that no one could have imagined that the “country’s economy could fall to such levels”.

The International Monetary Fund (IMF) will come to rescue Pakistan only when its conditions are accepted, the former prime minister said. He, however, added that inflation would further rise in the country if the conditions of the international lender are “accepted”. “The prices of petrol and diesel will surge if the Pakistani currency is devalued against the US dollar,” he feared. Imran Khan said, “Notorious dacoits were brought to power under a conspiracy.” Lambasting the collation government, he also said, “Major dacoits are given key posts in the country.” Amendments, he said, were made to National Accountability Bureau (NAB) laws to end cases against the rulers. He claimed former president retired Gen Pervez Musharraf gave them NRO-I and later ex-COAS Gen Bajwa gave them NRO-II. Seeking the attention of the judicial fraternity, the PTI chairman said the struggle to uphold the rule of law is “jihad”.

Khan once again criticised the state machinery for the brutal torture of PTI Senator Azam Khan Swati in front of his grandsons and granddaughters. He added that the senior lawmaker was humiliated just because of “one tweet”. Talking about the problems being faced by him in lodging an FIR about the assassination attempt on his life even when his party was in power in Punjab, Khan asked, “Who is blocking justice?” The JIT [joint investigation tribunal] tasked with probing the assassination bid on his life is being sabotaged, he added. Continuing his broadside against his opponents, Khan said, “Name any other world leader who secured NRO after looting the country.” He recalled the PTI-led government s contributions, saying, “During our tenure, the industries and agriculture sectors saw growth.”

The ex-PM emphasized the importance of a fair justice system for all citizens and criticized the current government for altering National Accountability Bureau (NAB) laws to absolve corrupt individuals. He also highlighted the significant increase in default risk for Pakistan, which rose from 5% in April 2022 to 90%. The former prime minister emphasized that true prosperity cannot be achieved without justice. Additionally, he criticized Prime Minister Shehbaz Sharif for offering an olive branch to India without addressing the ongoing issue of Indian actions in occupied Jammu and Kashmir.