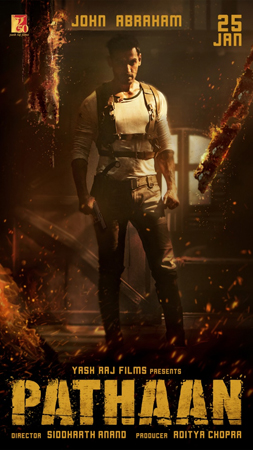 The hotly-anticipated trailer of the action extravaganza, ‘Pathaan’ led by Shahrukh Khan has been released.

The official trailer of the most-awaited and much-talked-about spy-action-thriller ‘Pathaan’, starring Shahrukh Khan, Deepika Padukone and John Abraham in leads, was released on social platforms Facebook and YouTube on Tuesday morning.

An almost two-and-a-half-minute-long trailer is full of raw action between Khan as ‘Pathaan’, an agent of RAW, who ends his hiatus and Abraham as a lethal antagonist set to launch an attack on India.

Pathaan is also offered to join forces with Padukone – who appears with her blonde wig – to take over the antagonist, in order to save ‘Bharat Maa’.

The trailer crossed over three million views on YouTube within hours and received love from netizens. Although fans were a bit disappointed not to get any glimpse of Salman Khan’s cameo, the trailer nonetheless was dubbed a ‘sure shot blockbuster’ by Twitterati.

While the film had been mired in controversies, the recent trailer has definitely made ‘Pathaan’, a thrilling ride to look forward to. About the spy action flick, ‘Pathaan’ has been directed by Siddharth Anand who has also written the screenplay with Shridhar Raghavan, whereas, the patriotism-filled dialogues are penned by Abbas Tyrewala. Filmmaker Aditya Chopra has bankrolled the project under his banner Yash Raj Films. The musician duo Vishal-Shekhar are the composers for the film.

‘Pathaan’ is slated to release simultaneously in Hindi, Tamil and Telugu versions on January 25.