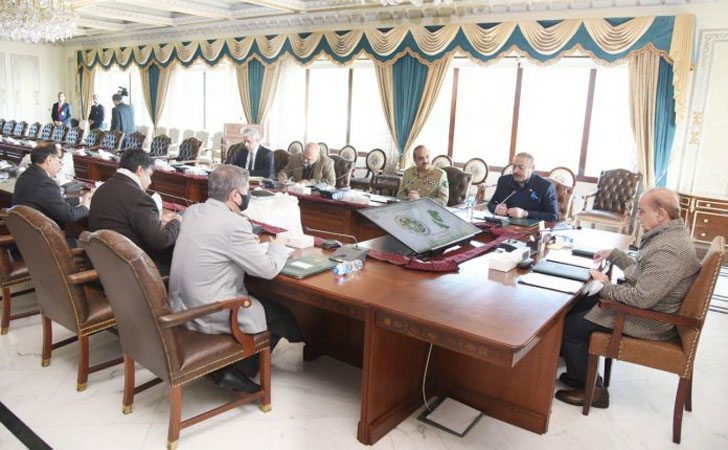 Prime Minister Shehbaz Sharif on Tuesday, expressing satisfaction over the COVID-19 situation being under control in Pakistan, directed the authorities concerned to ensure the vaccination of children aged 5-12 years on an urgent basis.

He said it was pleasing that no Covid-related death was reported from across the country in the last 15 weeks, and said the whole nation was thankful for the countries which had donated vaccines to Pakistan.

The prime minister said the decline in the ratio of COVID infection was pleasing but “we have to be alert all the time.”

He appreciated the efforts by the National Command and Operations Centre (NCOC) and other relevant office bearers for containing the spread of COVID.

During the meeting, the prime minister was briefed about the current Covid situation, new variants, ongoing efforts, and the status of vaccination. It was told that Pakistan apparently faced no threat from the new variant as almost 90% of the population was fully vaccinated and 95% partially vaccinated. Around five million children of 5-12 years of age have been vaccinated which was 25% of the total strength and the target of full vaccination would be achieved within the next few months.

The meeting was told the infection ratio of 0.2 to 0.5% average was reported in the country. The participants of the meeting were told that an effective mechanism was in place at the borders to contain the spread of Covid. Moreover, the ratio of random sampling at the airport has been increased to 2% besides ensuring the fumigation of the planes coming from the affected countries. It was told that Pakistan was among very few countries where genomic surveillance of Covid has been introduced to ensure early detection of the new variants.

The prime minister also appreciated the efforts by the NCOC, the officers of the Ministry of National Health Services and the officials of Civil Aviation to contain the spread of the virus. Meanwhile, Prime Minister Shehbaz Sharif held a telephonic conversation with his Malaysian counterpart Anwar Ibrahim wherein they discussed bilateral relations, flood situation in Pakistan, and upcoming International Conference on Climate Resilient Pakistan, taking place on January 9, 2023 in Geneva.

The prime minister felicitated his counterpart on his election as the prime minister of Malaysia. The two leaders expressed satisfaction over the momentum of Pakistan-Malaysia relations and agreed on the importance of regular high-level exchanges to strengthen bilateral dialogue and cooperation.

Shehbaz underscored Pakistan’s desire to forge a broad-based relationship with Malaysia with robust political dialogue and trade and economic linkages. The two leaders reaffirmed their commitment to further strengthen the historic ties between Pakistan and Malaysia anchored in strong economic and trade cooperation.