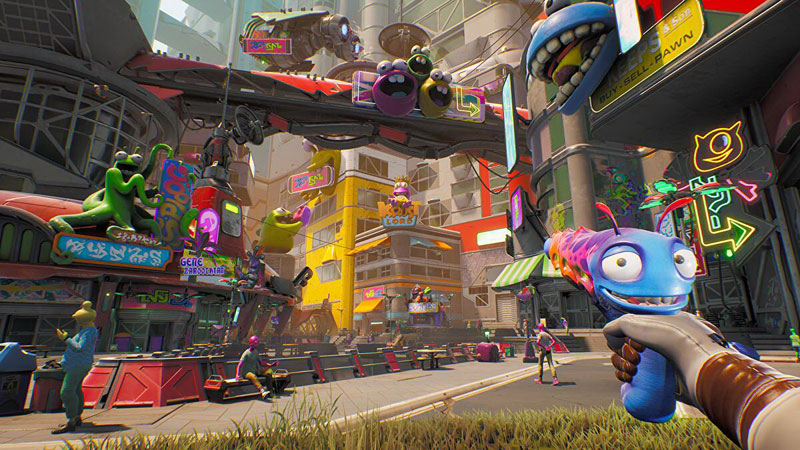 Have you ever had strange fantasies about the attractive person that lives down your street? You have, don’t lie. We’ve all had that idea in our head that we’re going to take that stunning blonde, mulch them up and smoke them to get a bigger hit than Jesse Pinkman on his best day.

Jesse could also tell you that drugs can have side effects, including digestive issues. Like my kitten recently, High on Life has diarrhoea – only the game has the verbal type.

Not a great opening line, is it? I’m going to start by saying that I’m not entirely down on High on Life. It’s a perfectly functional game, but only being functional doesn’t get me high. If you haven’t got Game Pass or picked it up yet, let me tell you what High on Life is. It’s a shooty-action game with platforming elements. Think Ratchet & Clank, but without the charm, fun, humour, great characters, excellent writing and charm. Also, the knowledge of what makes such a game suitable.

Wait, no, positives. So, the guns are decent enough. You’ll find four guns across your travels, each with a unique voice and personality. There’s also a knife that takes a hyper-sexual joy out of gutting anything and tearing out its innards. Comedy, you see.

That’s not fair. I enjoyed Knifey. I liked Knifey more than any other weapon or character in the game because he wasn’t there all the bloody time. He got a few lines here and there, made me chuckle, and didn’t make me want to tear my eardrums out with a pelican’s private parts. Early on, I have to admit I did want to hear how each gun would reach different aspects, but eventually, they all get to the same level of telling you that their “trick hole” is ready. They’ll also remind you of the current objective from time to time. Most of all, they’ll comment on how the weak enemies are a waste of time and how waves of enemies are dull.

Despite the constant waves of enemies, I will say that the gunplay within High on Life is decent once you get the later Gatlians. You’ll also find a few pleasant little aspects here and there, such as watching whole live-action films on the TV or in a cinema you can make appear. The only other thing I can offer outright praise about is the movement in the game. The areas are broad enough, vertical, and provide several collectables and secrets, all reached by the trick-shots of your Gatlians, as well as the use of your jetpack.

The art style of High on Life adds to the strong traversal of the different areas within High on Life. As I said back in my preview, it’s very colourful. Simply put, it’s nice to look at; I imagine it will age well aesthetically. This, combined with the level design, is a positive. The way the worlds open up as you complete more bounties and get more Gatlians with their alternate firing modes – whichh act as methods of travel – is one of the few unqualified positives of the game.

If only there were more. While the variety in weaponry is small, I find it offers enough to hold your end of the bargain within combat. The only problem is the game doesn’t provide enough enemy variety to keep itself engaging. As I’ve already mentioned, it acknowledges how dull some enemies are. Squanch Games probably thought they were being funny – the reality is that telling me some enemies are a waste of time or criticising yet another arena fight is just highlighting what my brain is already telling me.

I should also say that the gunplay is quite floaty. That will be a negative for some, but I never expected it to be a tight shooter. It does what it needs to and offers a slight modification system to add a little extra variety to the guns. It doesn’t stand out as anything special, but it’s better than nothing.

As said, traversal is one of the unqualified positives. High on Life is a far better first-person-platformer than it is a shooter. I enjoy exploring the areas, trying to find the Luglox chests, collectable cards and warp points to explore the little additional elements added by Squanch Games. That’s even if some of the extras have the same humour as the rest of the game, for example connecting pipes so one alien can eat the faeces of their friend.

There’s not a great deal more to say about High on Life. The setting is as irreverent as you would expect – you’re a child who has picked up an alien gun as the aliens invade Earth, and you can handle it because you play a lot of video games – one you’re playing at the start of the game. Meet some more characters and don’t encounter any narrative arch. Unless you count a betrayal that you knew instantly would betray you, I don’t because it was so clearly telegraphed that it could have been a fifty-foot neon sign.

So, do I like High on Life? When I wrote my preview, I expected that I would like it. I remember seeing it during not-E3 and thinking it looked good. It’s certainly done well for itself over on Game Pass and Steam, but I can’t say I have any majorly positive feelings towards it. Maybe that’s why my review is late. It’s not the reason, but I just wanted to put a few more lines in there to mimic High on Life in how it never stops. No, it never stops at all. It just keeps going on and on and on. It keeps going until the joke has been well and truly murdered; think a Fred West victim. Or a victim murdered by repeated stabbing, possibly with their genitalia. Also, they were covered in poo because that’s a High on Life thing.

High on Life is likely a divisive game. While the gameplay is more than sufficient – if you’re happy with an unrefined, almost arcade-style shooter – you then come to the dialogue and “comedy”, which, to me, was overdone to the point of annoyance. Funny to begin with but repeated so much that a drinking game would lead to liver failure. Fortunately, being on game pass, you don’t have to fork out too much to see if you like it.