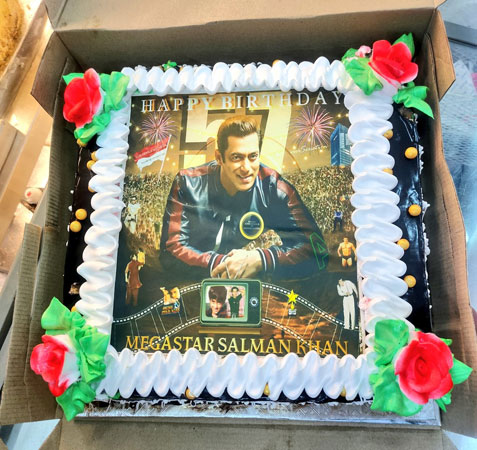 Salman Khan, the biggest crowd-puller of Bollywood, celebrated his 56th birthday on Tuesday. The superstar celebrated his birthday along with his little niece Ayat Sharma, who turned three on Monday, Dec 26.

The Khan family threw a grand bash to celebrate the uncle-niece duo’s birthday together and it was attended by some of the most popular names in the film industry. Salman Khan also celebrated with the paparazzi photographers by cutting a cake with them.

Birthday boy Salman Khan looked stylish as ever in an all-black look, at his birthday bash. The “Tiger 3” star opted for a black pullover, which he paired with matching leather trousers, for the night. Salman completed his look with a pair of black shoes and his signature silver bracelet. The superstar, who was visibly excited about his birthday bash, came out and greeted the photographers and had a chat with him. Later, he had a special cake cutting with the media friends, before celebrating his special day with the invited guests.

The biggest surprise of the night was Shah Rukh Khan’s unexpected entry into Salman Khan’s 56th birthday party. The “Pathaan” star, who shares a strong bond with the “Tiger 3” actor, arrived at the venue late in the night. Shah Rukh Khan looked super handsome in a black look, in hooded jacket, which he paired with a matching t-shirt and trousers. As per the reports, the Karan Arjun duo had an absolute blast at the party and danced together till early morning.

Salman Khan was later seen accompanying Shah Rukh Khan as he made an exit, and the duo shared a warm hug. They also posed together for pictures before SRK made his exit.

For the unversed, the crowd puller is set to reprise his popular character Tiger from the highly popular Tiger franchise, in King Khan’s highly anticipated film “Pathaan”. The spy thriller, which is helmed by Siddharth Anand, and produced by Yash Raj Films, is slated to hit the theatres in Jan 2023.