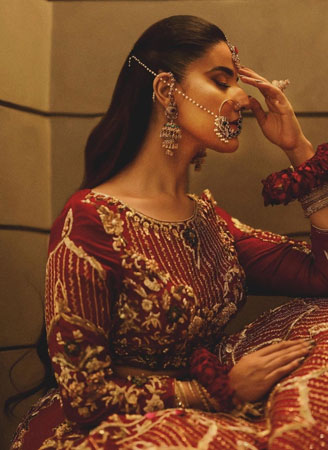 Actress and producer Hareem Farooq has proved herself as a force to be reckoned with in the industry.

Her work in stellar dramas and films has won the hearts of fans and critics also.

Apart from her on-screen presence, she is quite active on social media platforms, especially Instagram. The celebrity leaves netizens mesmerized with stunning visuals of herself and her work.

They go hit every time and receive thousands and sometimes millions of heart-warming reactions from fans and admirers.

She swooned with social media users with elegant pictures and a video of her latest photoshoot. It showed her in a red-coloured dress with jewellery and gajra in her hands.

Earlier, her pictures in a peachy-nude sweater were a hit also.

“Bye bye Monday,” the celebrity wrote in the caption of the eight-picture gallery with a waving hand emoji. She styled the outfit sweater with a pair of giant hoops and flaunted her luscious locks with doll-like eyes and glossy lips to complete the minimalist look.

On the acting front, she has played a major role in the revival of Pakistan’s film industry with her work in “Janaan” and “Parchi” which she co-produced with IRK films.